This is The End of the Golden State Dynasty

There have only ever been a few truly great dynasties in modern history:

The ends of these calibre of eras don’t come around every day. Let’s just hope with the demise of the Warriors the NBA isn’t plunged in to the sort of power vacuum we saw post-fall of Rome in 476 AD – the last thing the world needs is an NBA Dark Ages.

Because, make no mistake, the events of last Thursday night ended the Warriors as we know them. With their demise goes much of the NBA’s predictability; a boon for Adam Silver and his vaunted equalisation measures to be sure, but not so great for those of us who like to think we can project future results.

For the last 5 years, through all the free agent drama and regular-season shenanigans, at least we’ve known one thing: come what may, the Warriors would be representing the Western Conference come late May / early June.

After Game 6 of 2019’s NBA Finals it feels, in the inimitable words of Ygritte from Game of Thrones, like we know nothing.

The canvas is blank. Both for Golden State and the league as a whole. What comes next is anybody’s guess.

For the Warriors and GM Bob Myers, they’re left with two enormous questions going in to this offseason:

What to do with Klay and KD?

Some will say it’s disrespectful to lump the Warriors’ two injured superstars of the game in the same breath, as if they’re merely two role-players packaged in a trade for draft picks. After all, one is a two-time Finals MVP and arguably inside the top 10-15 players of all time, while the other is probably the second-greatest shooter of all time.

Unfortunately though, whatever happens from here, the careers of Kevin Durant and Klay Thompson will always be linked inextricably by the events of last week.

Rarely have we seen two such monumental injuries occur to two mega-stars in such a short space of time. Let alone two mega-stars on the same team. Let alone in a Finals series. Let alone when they’re both poised to enter free agency. Let alone amidst all the surrounding drama.

It’s an unprecedented situation for a franchise to be in. Let alone one that’s won 3 of the last 5 titles. Let alone… etc. You get the drift. This has never happened before and odds are it will never happen again.

Suddenly, despite it appearing for all money for the last 12 months that Durant was on his way to the Knicks, the Warriors have discovered a lifeline for keeping their star. In one fell swoop (and a torn Achilles) the legacy of Durant in the Bay Area twisted 180 degrees from loathed championship-chaser to revered stricken martyr. He’s now the guy who selflessly put $180 million on the line to try and dig his team out of a 3-1 hole rather than the schoolyard anti-hero who weaseled his way in to the dominant cool-group, leaving his mates in the dust.

This stuff matters to KD. Any move out of California would hardly have been to join a contender. Nor would it have been about money. It would’ve been about legacy.

Durant has a $31.5 million player option with the Warriors for next season. That’s hardly chump change, although it is significantly less than what he’ll make should he test the open market. Despite the injury, reports are suggesting all the same teams in the market for Durant (i.e. both New York based franchises) are still willing to offer him a max four-year deal. Other reports, including from Woj, hypothesise that the likeliest outcome may be be Durant signing for two years with another team for a deal worth around $38 million per year.

All things considered it’s tough to see Durant exercising his option. The money is just too extreme from elsewhere – even $7 million extra a year is an absurd amount of dosh. Even for guys who’ve made as much as Durant over the journey.

So do the Warriors offer him four or even five years at the max? How desperate are they to retain the services of one of the top 3 players in basketball? Do they throw away next season and wait for Durant to rehab?

These are questions we simply can’t answer at this stage. Given the injury itself and the expense of hanging on to a guy who may never fully recover, it may be in Golden State’s best interests if Durant enters free agency and receives a Godfather offer from elsewhere. At least then both parties will know where they stand for the next twelve months

Then there’s Klay Thompson. Although there seems to be some suggestion Thompson can return by the All-Star break in 2020, odds are that he misses most of, if not all, of next season with a torn ACL. Having said that, if anyone can rehab a knee in record time it’d be Thompson.

At just 29, the second Splash Brother probably has 5-6 years of high quality NBA-level basketball left in him. Maybe longer – Ray Allen did play until he was nearly 40.
Thompson’s well-documented All-NBA snub looked incredibly unfortunate for both him and the Warriors at the time, but perhaps in this post-ACL world it’s the best thing that could have happened to Golden State. Now they can max him out over five years without either side being able to complain of over/under paying.
Over the weekend Thompson’s father Mychal was vociferous in his assertions that Thompson would be returning to the Bay next season (and beyond). It’s expected that the Warriors will still offer him the full max deal.
Whether they should or not is a different story. Of course, there’s a sense that Golden State “owes” Thompson for his contribution to their three championships since 2015. But this is professional sport. Knee injuries, particularly for basketballers, can cripple careers. Particularly for spot-up shooters like Thompson who are so reliant on their knees to generate power, often from a shooting stance that looks outrageously unorthodox.
Again, like Durant, signing Thompson to the max carries with it an inherent amount of risk. And an enormous amount of wasted money in the immediate short-term. Paying $60+ million for two guys to sit on the bench for a season is tough to cop, even for a franchise as notoriously flush with funds as the Warriors currently are. 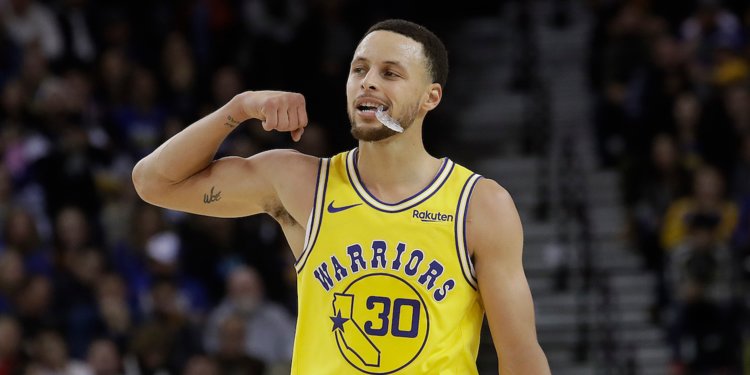 With all due respect to Draymond Green (who’s one of our favourite NBA players), the loss of Durant and Thompson for at least next season leaves a ridiculously heavy burden on the shoulders of Stephen Curry.

Green has shown time and again his other-worldly capabilities on defense and as a passing asset, particularly in the pick and roll. But even in a Finals series missing Durant, occasionally Thompson and intermittently Kevon Looney, he still averaged just 12.5 points per game. That does not bode well for his prospects as the second offensive option for the Warriors next season.

Curry’s 31 years old and will be 32 by the time the playoffs roll around next year. What he showed in the Finals, particularly in Game 3, was that he can score at will despite being the defence’s primary focus, but not necessarily that the Warriors can win with him as a primary offensive focus.

That’s a key distinction to make. It’s not a reflection in any way on Curry’s ability as a player. It is, however, a reflection on the type of player Curry is.
How many teams with the dominant offensive threat coming from the point guard position and little scoring elsewhere have ever been successful? The case studies are few and far between, but the few that we do have (the Hornets with Kemba Walker, the LeBron-less Cavs with Kyrie Irving) suggest the improbability of the Warriors with Curry solely at the helm being able to make a run in 2019-20.
Note: “improbability”.
If any PG in the history of the league can lead a team and carry an enormous offensive workload, it’s Stephen Curry.
(Touch wood) he appears to have shaken the lower-limb injuries which plagued him early in his career, and at 31 is arguably smack bang in the middle of his basketball prime.
Steve Kerr has shown time and again his ability to think outside the square with his lineups, so maybe we see a whole lot more of Quin Cook running the point and Curry playing off the ball. Maybe Shaun Livingstone sticks around for one more year. Hell, knowing Kerr maybe Jonas Jerebko ends up playing as a backup point guard.
The Warriors will find a way to keep Curry rested, healthy and getting enough shots to give him a realistic chance of putting up 30+ every game. As an organisation, they’ve well and truly earned our trust in that respect.
It’s also not as if Curry has ever been a player to build around defensively. Expect to see him tanking a lot of defensive possessions next year (more than normal) in order to recover on offense.
There’s a sliver of hope that the Warriors can remain competitive next season, at least long enough to get Thompson back from rehab.
Without any hint of exaggeration – that hope revolves entirely around Stephen Curry. This is going to be a fun season if you’re a fan of 30 foot three pointers.