On Tuesday, reports began emerging that the New Orleans Pelicans have officially begun listening to trade offers for their superstar centre Anthony Davis.

This should be breaking news to precisely no one. Of course the Pelicans are listening to offers for Davis, and we’re willing to betthat they have been for quite a while.

What can be taken away from the ‘official’ (as official as any of these things are) confirmation, though, is that the bidding war for Davis has officially started.

Whilst there remains an outside chance David Griffin and co. hang on to the Brow for at least part of the season just to see what unfolds with he and Zion paired together in the post, the message coming out of New Orleans currently is clear – IF they receive the right offer, Davis is on the table.

So, what are the rankings for The Brow’s most likely destinations in season 2019-20? Let’s find out!

We appreciate the vagaries of the NBA trading world.

We understand that every team thinking they’re in with a shot for Davis is advantageous for the Pelicans, because it drives his price up even higher than it currently is.

We get that Pelicans owner Gayle Benson was obliged to refute the rumours that she told David Griffin that Davis would be traded to the Lakers “over [her] dead body”.

That doesn’t mean we don’t believe she said it. EPSN’s Jackie MacMullin (who broke that particular story) is not in the habit of reporting stuff without knowing (or at least heavily suspecting) it of being true.

New Orleans has to keep the Lakers (and the other teams in the chase) believing that there’s a possibility Davis ends up playing with Lebron, because the truth is LA has one of the better trade packages to offer up.

It’s just not going to happen. Not after the way Rich Paul and the Lakers management handled Davis’ initial trade request earlier this season, effectively forcing Gentry and the Pelicans to bench their star player for much of the remainder of the season.

You can rule the Lakers off your list. It ain’t happening. 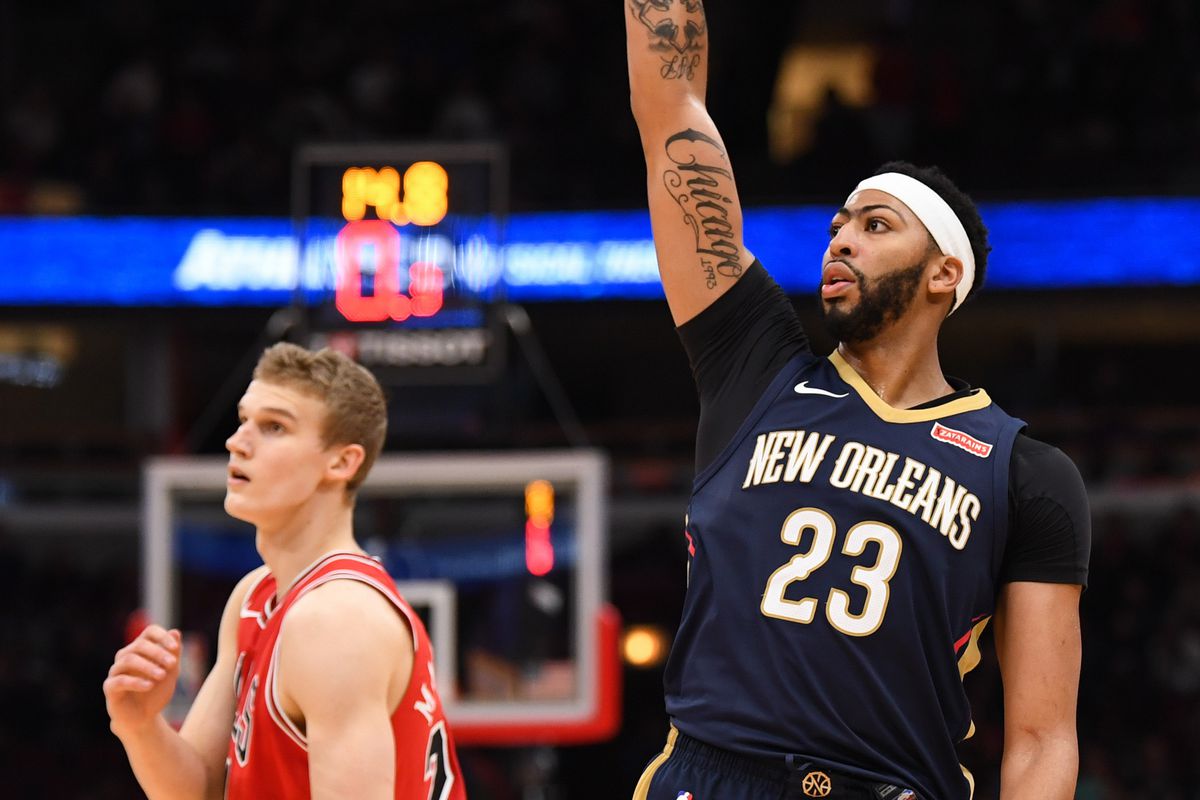 There’s a clear top 4 (excluding the Lakers) in the hunt for Davis’ services, and outside of those teams it starts to get a little messy.

We like to get creative here at Sportstips.com though, and one of the most enticing storylines of the summer is the idea of Davis returning to his hometown of Chicago.

Yep, The Brow hails from the great state of Illinois and played all his high school ball in the south side of Chicago before relocating to Kentucky for college.

The Bulls have been crying out for a hometown hero since the downfall of Derrick Rose, and Davis fits the bill perfectly.

Not only that, but they also have a series of quality assets which might be appealing for Griffin and his minions.

Unfortunately, Chicago plummeted down the 2019 draft order, finishing with pick 7 after the lottery. However, they have a host of contracted players likely to pique the interest of the Pelicans front office, led by Lauri Markaanen and Wendell Carter Jr and capped off with decent role-players in Kris Dunn and Antonio Blakeney.

There’s no doubt whatsoever that the Bulls can put together a competitive offer for Davis, but will they want to? This squad is firmly in rebuild mode, and poaching Davis is a win-now kind of move.

Just think about the storylines though.

Like it or not, New York are going to pull at least one (maybe two or three) enormous fishes this summer. The simple truth is they can’t afford not to.

If owner James Dolan misses out on Kyrie Irving, Kevin Durant, Kemba Walker etc. in free agency, the front office is going to have to fall back on something or risk the (even more intense) ire of a fanbase aching, pleading for some (ANY!) form of success.

That something will be the trade table.  The Knicks have a host of variously valued assets they can float with the Pelicans for Davis, including the number 3 overall pick in the draft (to pair Zion with teammate RJ Barrett) and a host of contracted players on rookie or otherwise friendly deals – Frank Ntilikina, Kevin Knox, Mitchell Robinson and/or Dennis Smith Jr.

Davis has made clear repeatedly that one of his preferred destinations is the Big Apple, which of course, while theoretically irrelevant to the Pelicans, does make trade discussions that little bit less complicated.

The only factor weighing down New York is their lack of star-power. All of the players listed above, while promising, aren’t really guys to build a team around.

The Knicks may have to get creative if they want to win the Pelicans over.

Any drastic move by the Celtics this offseason will depend on the movements of Kyrie Irving.

If Irving stays, Boston remain a championship threat and will be looking to top off their top-end talent with another mega-star in the ilk of Davis.

If Irving goes, the Celtics may just find themselves in rebuilding mode, and any attempt to sell the farm in order to get Davis would be rendered (arguably) pointless.

Assuming Irving does choose to stay in Boston, they can certainly offer up enough to pry him out of Griffin’s hands.

Jaylen Brown, Marcus Smart and Jayson Tatum are all on fantastic contracts for next season, while Boston control a host of draft picks, including what might turn out to be a fully unprotected first round pick from the Memphis Grizzlies in 2021.

While Tatum’s stock took a hit this season, Brown and Smart are at all-time high levels. One of those two (or both) plus Tatum and a pick or two would probably be enough to tickle Griffin’s fancy. Whilst everyone is looking at their rivals across the bridge in Manhattan, the Nets may just be able to sneak a deal for Davis under the radar.

Brooklyn have a host of players on good deals for next season and any trade for Davis would likely include a selection of two or more of Spencer Dinwiddie, Joe Harris, Caris LeVert and Jarrett Allen.

Of all those, Allen is the most valuable piece. At just 21 years old he’s already established himself as one of the premier shot blockers in the league, and will be paid just $2,376,840 next season. He’s a quality roleplayer to build around, and may yet add an outside element to his game which we haven’t seen as yet.

The most intriguing part of any trade discussion with the Nets is twofold, and revolves around two names: Kyrie Irving and D’Angelo Russell. Irving has long been rumoured to have more than a passing interest in the Nets in his pending free-agency.

Obviously, it’d be nigh-on impossible to see the restricted free agent Russell staying in the event Irving gets to Brooklyn, so could the first-time All-Star play a part in any trade for Davis?

If Brooklyn play their cards right they may end up with Irving and Davis at the cost of Russell, Allen and maybe LeVert, which would be an unbelievable result. They’d automatically become everyone’s second team. 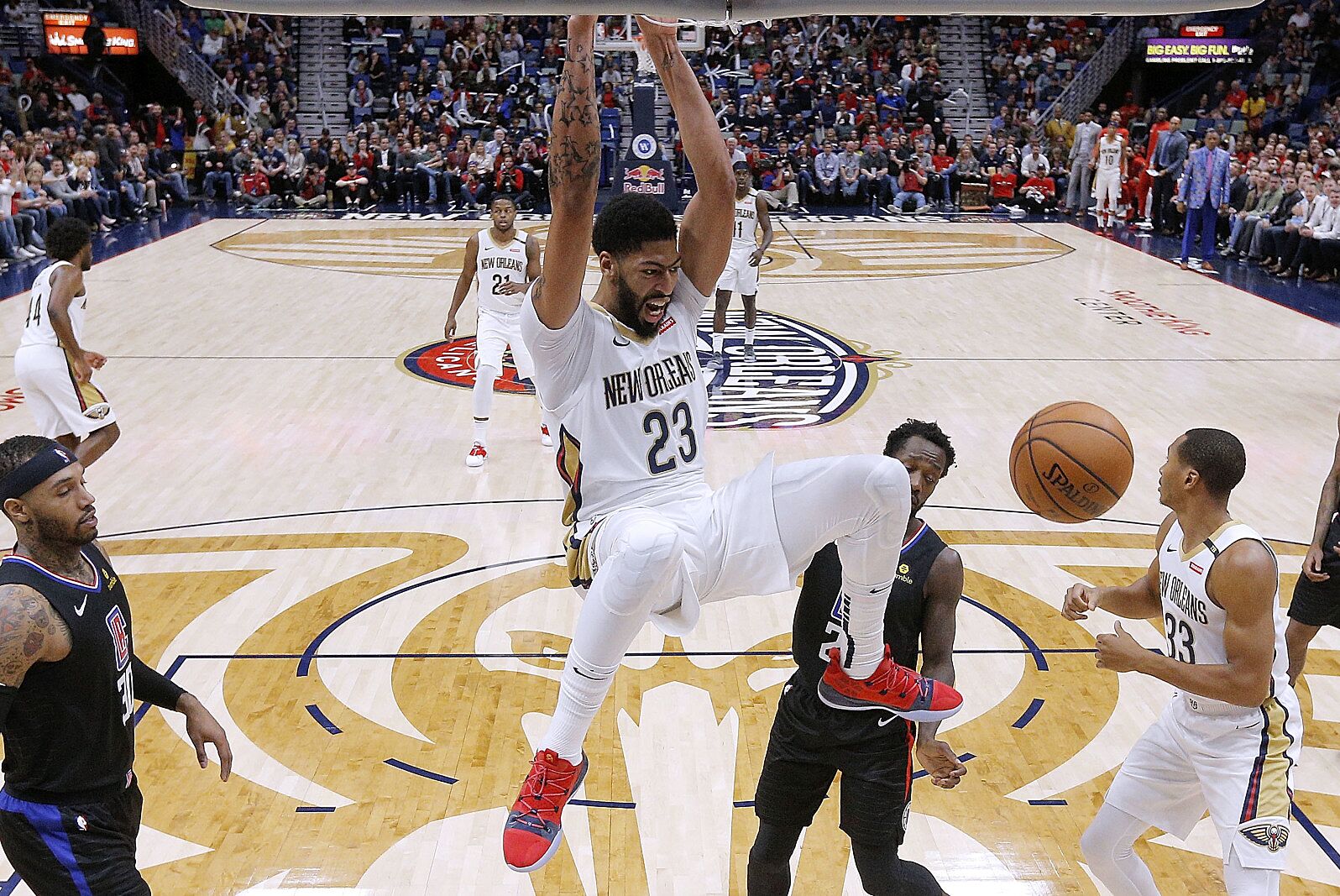 First up, it’s worth noting that with some shrewd salary-cap work, the Clippers could free up as much as $59.6 million in cap space this offseason.

Not only would that be more than enough to take on Davis’ $27,093,019 contract for 2019-20, but it would also leave room for the signing of a superstar free-agent. Oh, I don’t know, say – Kawhi Leonard? Imagine a combination of Lou Williams, Leonard and Davis, with role-players like Landry Shamet, Patrick Beverley and Ivica Zubac waiting in the wings. That’s an attractive-looking trade destination for a player like Davis.

Most importantly for the New Orleans front office, though, the Clippers have a heap of assets they can offer up in a trade package. Arguably, a heap more than their major rivals in New York and across the other side of town.

Danilo Gallinari, Montrezl Harrell, Shai Gilgeous-Alexander and Shamet are all signed to team-friendly deals for next season, and a combination of any two or three of those guys would form an attractive nucleus for Alvin Gentry and co. to build around for the future.

Meanwhile, just as appetising for the Pelicans would be the fact that the Clippers have two first-round picks they can play with, including Miami’s unprotected 2021 first-rounder they nabbed from Philadelphia in the Tobias Harris trade.

If the Clippers can prise Leonard out of the North in free agency and subsequently come knocking at David Griffin’s door, it’s going to be nigh on impossible for Davis or Griffin to turn them down. They’re the perfect combination of a quality team with quality assets to offer up.