Particularly in the last 24 months, but really throughout his tenure as the most powerful man in basketball, Silver has been a vociferous critic of teams who choose to go down the fraught path of deliberate, institutionally-endorsed losing.

Most notably, at the All-Star weekend in February of this year he called the strategy “corrosive”, and in February of 2018 infamously fined Dallas Mavericks owner Mark Cuban $600,000 for making “public statements detrimental to the NBA” after the millionaire publicly stated his team’s best option at that point in time was to deliberately lose basketball games.

The Cuban incident resulted in a memo being sent to all 30 NBA teams directly from Silver highlighting that tanking has no place in the NBA. It also outlined (in no uncertain terms) that if the NBA ever received evidence that players or coaches were attempting to lose or otherwise taking steps to cause any game to result otherwise than on its competitive merits, that conduct “would be met with the swiftest and harshest response possible from the league office.”

While words like that from Silver sent a definitive message on paper, the problem for the NBA is that not only has tanking been rampant in the last decade, it’s also been successful. Quite blatantly so in the instance of the Philadelphia 76ers. 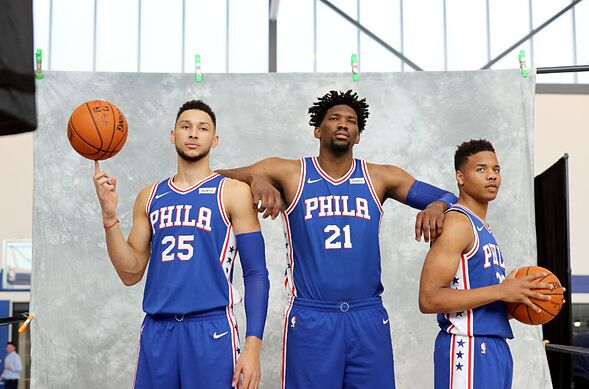 “The Process” is referenced so often in relation to this topic it’s become almost a cliché, but the simple truth is that the inextricable links between the 76ers and the NBA’s tanking problem are nearly impossible for the media (and the league) to avoid.

Ben Simmons and Joel Embiid, the two gilt-edged centrepieces in Philadelphia’s playoff runs in the last two years, were “earned” (for lack of a more appropriate word) through a deliberate policy of not wanting to win basketball games. The Sixers stockpiled assets for the best part of half a decade, traded away most of their decent players and deliberately made themselves terrible (by one method or another) so they would improve their chances of receiving high draft picks.

Without delving too deep in to the nitty-gritty and all the bizarre twists and turns the Process has been through, it’s led to Philadelphia becoming one of the top teams in the NBA and right in the mix for a championship, even despite swinging and missing on roughly 75% of their draft choices. Imagine where they’d be if Jahlil Okafor, Nerlens Noel, Michael Carter-Williams and Markelle Fultz were even semi-decent roleplayers.

Largely because of what was unfolding in front of our eyes in Philadelphia, in June 2017, Silver openly admitted that the NBA’s current draft lottery system was not working. He was quoted (in a moment of delicious irony) on a Philly radio station, saying:

“We put the lottery in place precisely (to prevent tanking), and that was well over 30 years ago because teams seemingly had this huge incentive to finish at the bottom because the value of these draft picks is so high… We’ve tinkered with the draft lottery five times in the last 30 years, but we’re still not at the point where it’s frankly working.”

Not long after, in September of 2017, the NBA’s Board of Governors (in perfect step with Silver’s winds of change) approved a 6th historical tinker to the draft lottery process.

It may end up being one of the most impactful rule-changes in the history of a sport littered with them.

Starting this year, the teams with the worst three records in the league would receive a 14% chance of winning the number 1 overall pick, as opposed to 25%, 19.9% and 15.6% for the three worst teams in the old system.

The worst team (this year’s Knicks) would now be only guaranteed not to fall outside of the top 5 picks, as opposed to the top 4 under the old system.

The new lottery percentages in their entirety look like this (old odds in brackets):

In the four years prior to this year’s draft, the team with the most favourable odds had won the top pick in the lottery in all four. The mathematical advantages to finishing with the league’s worst win/loss record had become too pronounced for struggling franchises to ignore, and it was paying off for them.

That trend was irreversibly shaken on Tuesday night.

New Orleans and Memphis miraculously climbed in to the top 2 spots. Both teams finished the year with 33-49 records, and for large swathes of the 2018-19 were potential playoff contenders.

The clear mandate behind the lottery changes was to curtail the possibility that a team could successfully undergo a Philadelphia-style garbage fire, lose almost every game in a long stretch of time, and emerge stronger on the other side.

Silver’s comments at the All-Star break this year in respect of struggling franchises are instructive:

“There’s a mindset that, if you’re going to be bad, you might as well be really bad.”

That statement gets at the heart of what Silver wants to eliminate. He clearly has no issue with teams who are rebuilding and occasionally uncompetitive as a result, but he deeply, fundamentally opposes the idea of a franchise scraping the barrel in an effort to rebuild because to do so destabilises the league’s capacity to put on quality games of basketball every night.

It makes sense – who in their right mind would want to watch a game in mid-February between this year’s Knicks and Rockets?

In his address at All-Star weekend, Silver spoke about the idea of competitive balance:

“I look at the NFL, which among sports leagues, probably has the best parity and the best system in terms of creating competition than any league I’m familiar with… What people recognise is you want parity of opportunity.”

The NBA is a league that prides itself on any team on any given day being able to beat any other team in the league, regardless of their respective situation. It is desperate to avoid a repeat of the 10-win 72-loss 2015-16 76ers, who at times looked like they could’ve been given a run for their money by a local rec side.

The laws of mathematics (and physics and the time/space continuum) ensure we’ll never know if the Knicks would’ve won this year’s lottery if they’d had the 9% better odds offered in previous years. The fact is they did not.

Nor do we (or can we) know whether the 1.7% increase in New Orleans’ odds resulted in them winning the lottery. The fact is they did. The facts are all that matter.

To argue in that fashion, as if that result isn’t what Silver has been after all along, completely misses the point.

These changes were never about eliminating tanking, per se. Silver’s goal has always been to improve the NBA’s competitive balance; to ensure that no singular matchup in an NBA season is ever “a sure thing”.

With one fell swoop, and a lucky ping-pong ball draw, he may just have ensured that we never see a “really bad” NBA team ever again.