“Everyone’s Available”: The 3 Most Likely Trade Partners for the Houston Rockets

With news breaking on Wednesday (courtesy of Woj) that any and all of the Houston Rockets’ assets are on the trade table going in to this offseason, it’s safe to say Daryl Morey, Mike D’Antoni and co. won’t be ‘running it back’ in season 2019-20.

Whilst it’s a safe assumption that the caveat to ‘all assets’ is that probable-MVP-runner-up James Harden is in fact not available, the fact that Morey was reportedly contacting other league front offices with “an aggressive desire” to trade certainly does mean the likes of Eric Gordon, Clint Capela, P.J. Tucker and even Chris Paul are up for grabs.

Fair enough too. If the league can learn anything out of this season’s run by the Toronto Raptors (excluding what we already all suspected about Kawhi Leonard’s generational ability) it’s that doing the same thing over and over again and failing is the definition of insanity. Masai Ujiri threw all of Toronto’s cards on to the table in an effort to disrupt their conference finals status quo, and it’s resulted in the franchise’s first finals appearance in their (slightly mediocre to this point) history.

The only downside to such an open declaration of the Rockets impending garage sale is it does deprive Morey of a slight bit of leverage in any upcoming negotiations. It’d be a bit rich for the Houston front office to now turn around to another team and act like they’re desperate to hang on to Paul and will only depart with him for 100 cents on the dollar. On the other hand, maybe a clear declaration of intent to sell is the perfect way to create a bidding war?

Who knows. Either way, with a well-timed leak, Morey has just turned the Rockets in to the league’s most-talked-about franchise not currently prepping for the NBA Finals or self-imploding in LA.

So, which teams should be camped by the phone waiting for contact from Houston? Here’s our top 3:

With all the drama currently unfolding in Tinsel Town, we’re just going to go ahead and assume Lebron and his band of merry yes-men miss out on the likes of Kyrie Irving, Kemba Walker and Klay Thompson in free agency. Plus, after the debacle that unfolded in this season’s trade deadline, the New Orleans Pelicans are about as likely to trade Anthony Davis to the Lakers as they are to let him walk away for nothing.

That may leave GM Rob Pelinka in an incredibly precarious situation. As one of the league’s most powerful teams with a fan base renowned for its low tolerance for mediocrity, the Lakers are not in a position where they can end a second straight postseason with no pieces to place around Lebron.

Striking out on the above-named free agent targets, and swinging and missing on Davis, is pretty likely to lead to Pelinka hitting a panic button shaped in the image of Chris Paul.

It makes perfect sense. As we all know (too) well by now, Paul and James are firm friends off the floor. The poetry of Paul returning to the Lakers after the botched trade nearly a decade ago is also magnetic, and on the floor, despite Paul’s notable decline in ability and outrageously disproportionate contract, he and James would be a fearsome duo in pick and roll, let alone on the break in transition.

The one roadblock to this deal getting done is likely to be the Lakers’ dearth in comparable trade assets. Lonzo Ball is the obvious straight swap, but given he’s on a contract of just $8,719,320 next year (as opposed to Paul’s $38.5 million…) it doesn’t really make any sense for LA to make the move. They’d be selling the farm for a one year shot at the title with an aging, mediocre roster and little cap space. The same goes if the deal were to include Kyle Kuzma and/or Josh Hart and/or Brandon Ingram instead of Ball.

The other option would be for LA to target Clint Capela. The Swiss-born centre still has four years left on a five-year, $90 million contract, and at times has played as if that contract was a bargain.

Houston are unlikely to want anything to do with LA’s number 4 overall draft pick (unless it can be flipped elsewhere), so it’s likely Capela costs them at least Ball/Ingram + another piece. The Lakers have no centre currently locked in for next year, and as good as he was for chunks, are likely to want nothing more to do with the much-maligned JaVale McGee unless it becomes a bona fide emergency. The less said about Tyson Chandler, the better.

Arguably, Capela is an infinitely better fit than Paul. Will the Lakers brass be prepared to swallow some pride and take a chance on a lesser name? We’ll wait and see. 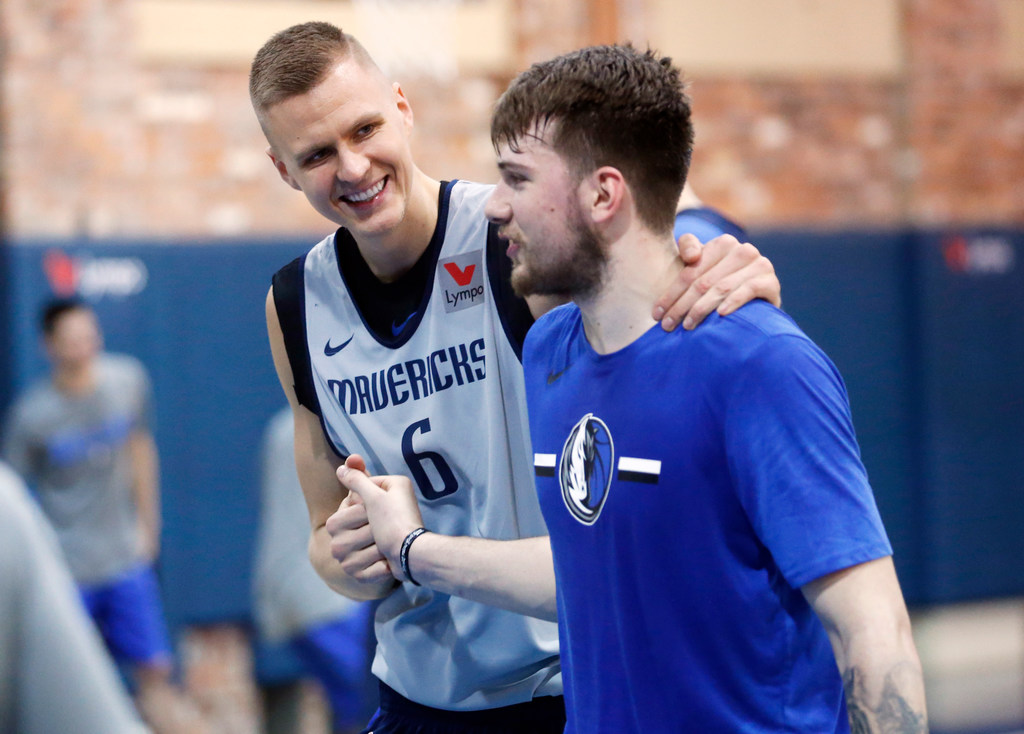 Speaking of perfect fits for Capela…

A young core in Dallas consisting of Capela’s rim protection and the constant alley-oop threat he provides around the rim; Luka Doncic’s ball-handling and long-range shooting and Kristaps Porzingis’ ability to float between inside and outside on an as-needs basis is a scary prospect for the Western Conference for the next 7-10 years.

A front court of Porzingis and Capela – both internationally born and bred – with the Slovenian born Doncic roaming as he pleases in the back court, feels incredibly up eccentric owner Mark Cuban’s alley.

The Mavs also have the assets to get this done. Courtney Lee has a contract worth $12,759,670 for next season and is exactly the kind of wing shooter the Rockets are notorious for loving. Justin Jackson is also an attractive rookie piece, and the Mavs have several future draft picks which could be thrown in the mix.

Importantly, they have more than enough cap space to absorb the effect of Capela’s reasonably large contract. This trade is a legitimate chance of going down, and reportedly there’s already been contact between the two sides.

Alternatively, Eric Gordon and P.J. Tucker are both assets Dallas should be looking intently at. Tucker would provide the perfect defensive, experienced anchor to a team filled with shooters, while Gordon lined up next to Doncic, Porzingis and Hardaway Jr. gives them almost an embarrassment of scoring riches.

Don’t be surprised if their in-state rival is Morey’s first phone call. He knows the Mavericks will be keen to make a move in to the upper echelon of Western teams in the next two years while Doncic is still on his rookie deal, and as such, they’re in dire need of some experienced heads to put around a young core. 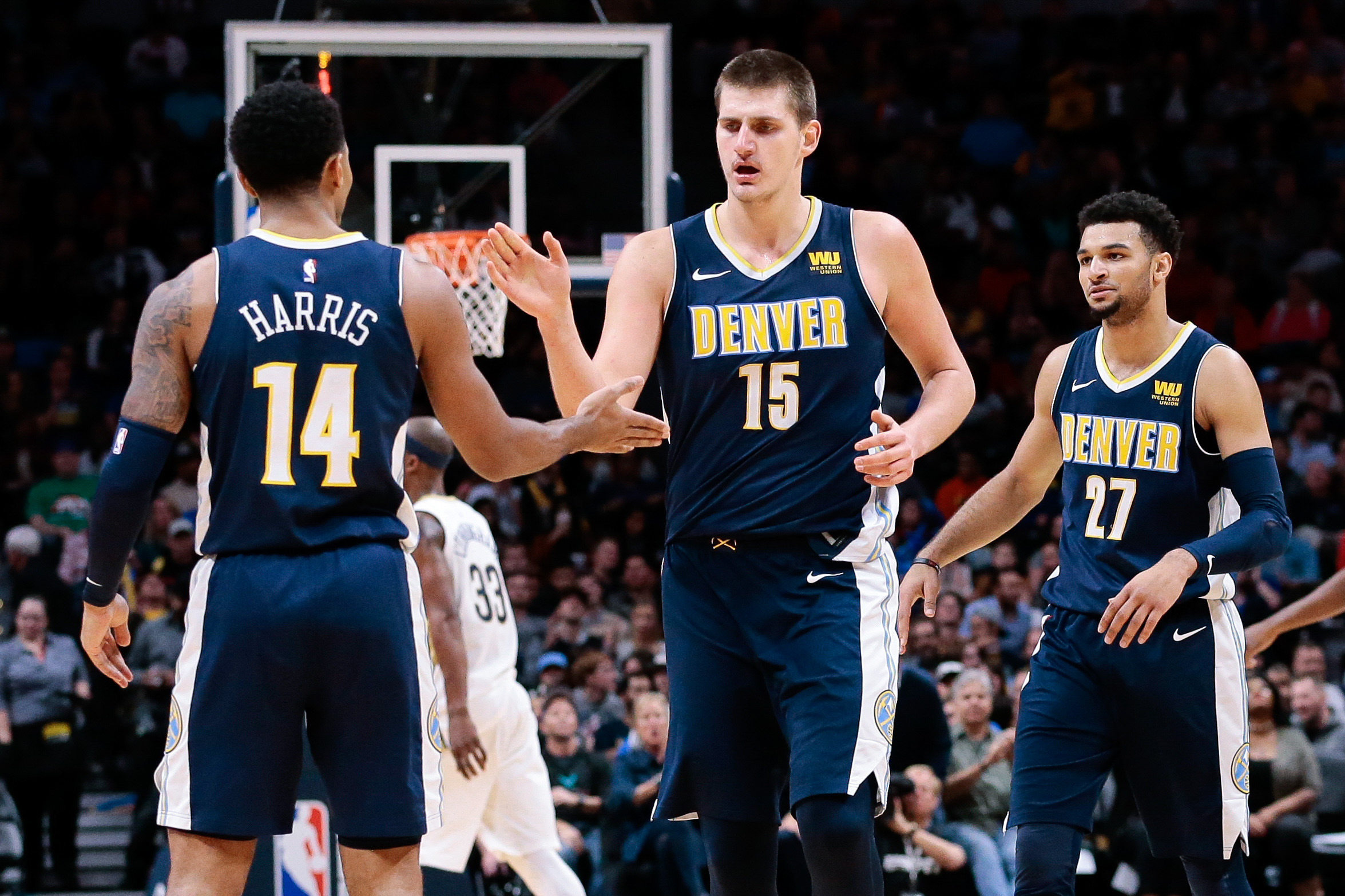 While we’re on the topic of a young team in the west needing to add experience to a talented but youthful roster, let’s turn straight over to the Nuggets.

Denver will be ruing the missed opportunity to go to this years conference finals after falling to Portland in 7 games, and it’s pretty clear what they need to go to the next level from here:

Late in Game 7 it was obvious the Trailblazers just had more guys who’d been in similar situations and knew what it took to win in the highest pressure scenario sport can offer. That’s something the Nuggets will learn slowly over time, but the quickest fix is to parachute someone in who can provide it immediately.

In that sense, Tucker is the perfect fit. Whilst ‘only’ appearing in 38 playoff matches so far in his career, he’s played in some of the highest-stakes basketball games we’ve seen in the last few years. Defensively, he’s able to match up on nearly anyone in the NBA; this year alone we saw him spend extended periods guarding guys like Jayson Tatum, Lebron James, Kevin Durant, Klay Thompson, and Ben Simmons, just to name a few.

Scoring clearly isn’t Tucker’s strong-point, but he does enough from three that even the most carefree defences will have to close out on him from the corner. Plus, with Jamal Murray, Malik Beasley, Gary Harris and Will Barton all signed for next year, shooting isn’t Denver’s weakness by any means.

The Nuggets also have more than enough in the bank to get this done. You’d imagine a second-rate piece like Barton or Mason Plumlee (who showed a lot in the back half of this season) would be more than enough to get the 34-year-old Tucker, even despite his team-friendly deal of $8,349,039 for next year.

Given their range of assets, you’d have to think the Nuggets may also come roaring in to the fold for Capela or Gordon as well. Capela paired with Jokic (in the same role Plumlee played to perfection at points this year) is an intriguing prospect, as is the idea of spreading the floor around Jokic even more with Gordon.

Mark all three of these potential deals down under trades we desperately want to see go down.