Even though the NBA playoffs are well and truly underway, it’s never too early to think through the weird and wonderful machinations of the offseason.

Every year, something happens in the NBA free agency period which is utterly shocking. With that in the back of every fan’s mind, one of the more entertaining intellectual activities in the period leading up to July 1 is to cast your mind towards the most off-the-wall discussions which might be unfolding deep in the back-channels of an NBA organisation.

Last year, the basketball world was shocked when the Toronto Raptors pulled off the unlikeliest of trades to get San Antonio Spurs star Kawhi Leonard, offloading franchise-favourite Demar Derozan in the process.

It’s a fait accompli that something just as unexpected will happen in the 2019 offseason, so what moves could leave us slack-jawed and open-mouthed this year?

5. The Kings get Zion

It’s fair to say this one is unlikely in the extreme, but boy would it be good for the NBA.

That roster, if it stays together, in two years’ time would be a genuine contender in the West.

Sure, Sacramento, courtesy of their surprisingly high 39-43 win-loss ratio, find themselves just a 1% chance of landing the number one pick in the draft. And, surely, despite Phoenix trying to play funny-buggers earlier this week and hinting they might take Ja Morant, the top pick is what will be required to land Zion.

So, is this any chance of actually happening?

The short answer is no… not really. The Celtics own Sacramento’s first round pick in this year’s draft unless that pick is number 1. So it’s not a complete impossibility.

In NBA Draft history the luckiest team ever were the 1993 Orlando Magic, who finished with a .500 record and the No.9 seed in the East. They somehow snared the No.1 pick with a 1.52 percent of winning the lottery and ended up selecting Chris Webber, whom was promptly traded to the Warriors for Penny Hardaway and three future first-rounders.

In recent years the Cleveland Cavaliers, with the 9th worst record in the league, won the 2014 NBA Draft Lottery with just a 1.7% chance, selecting Andrew Wiggins and trading him to Minnesota for Kevin Love.

There’s a chance. Just a really, really small one. 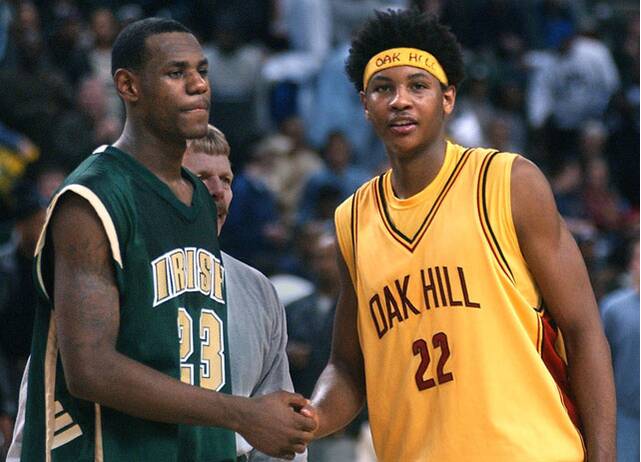 There have been rumblings about Carmelo Anthony hooking up with LeBron James since the beginning of their NBA careers, and wouldn’t it be oh-so-poetic if Melo were to arise from the ashes and salvage the rubble of this Lakers franchise.

Anthony was linked to LA basically throughout the free-agency period, as at that point the NBA world still believed it was a chance of making some playoff noise. In early March, as it became abundantly clear they were a glorified lottery team, Magic and Pelinka finally ruled out making a play for the future Hall of Fame scorer.

There’s a school of thought which sees LA miss out on every potential trade/free-agent target this offseason. KD and Kyrie go to the Knicks, Kawhi goes to the Clippers, AD gets traded somewhere with better assets, Jimmy Butler gets paid big bucks elsewhere, Kemba stays in Charlotte etc.

In that case, we might see the Lakers (under a new head coach and possibly new GM) hit full-on panic-stations.

Melo, despite all the negative fanfare, still averaged 13 points per game and shot the ball at over 40% during his brief tenure with the Houston Rockets earlier this season. His capability as a scorer remains unquestioned, even as he reaches his late 30s.

Maybe, just maybe, those notoriously divisive locker-room tendencies have sorted themselves out as he reaches bona fide maturity. He’d obviously cost the veteran minimum (so cap space isn’t an issue), at this point surely coming off the bench has become an inarguable reality for him, and despite all the ridicule he’d actually work reasonably well as a shooter on the wing getting dished the ball by one of the all-time great drivers to the hoop. So, why not?

As much as we think (despite most pundits leaning the other way) that Melo still has some sort of role to play in the NBA, he just wouldn’t be worth the (even bigger) media storm that it would bring to a franchise constantly battling to stay out of the headlines (for all the wrong reasons).

3. OKC has enough of Russ

This calls for some serious out-of-the-box thinking, but with OKC about to be bounced out of the playoffs in the first round for the second straight year, and having won only one finals game this decade, isn’t that exactly what’s required?

Westbrook averaged a triple double for the second straight regular season in 2018-19 with 22.9 points, 11.1 rebounds and 10.7 assists. He’s arguably the best player in OKC franchise history, and after spurning big offers in the 2017 offseason to re-sign with the team, probably the most beloved.

However, for all his brilliance and seemingly-constant playoff-level intensity, Russ carries with him some serious flaws, which are becoming increasingly more evident as he reaches the back-end of his basketball prime.

In 2019 he shot the ball at just 42.8% from the field, 29% from three and a worryingly-poor 65.6% from the line (all career lows, or thereabouts), whilst also committing a nasty 4.5 turnovers per game. In the playoffs so far (with OKC down 3-1 to Portland as this goes to print), his shooting percentage is down to just 36.3% from the floor, and apart from game 3, he’s been comprehensively outplayed in every facet by Damian Lillard.

With the battering his body has taken over the journey, and his already-obvious deterioration, those numbers should be scary if you’re a Thunder fan.

Dipping a toe in the trade waters is never a bad idea, particularly given at this stage in Westbrook’s career there’s a chance OKC might be able to squeeze close to 100 cents on the dollar for him. With some other tradeable assets (Steven Adams, Terrence Ferguson, a couple of second-round picks) there’s an outside chance OKC could offload Russ to a contender in exchange for a young star.

There seems little to no chance of OKC getting back in to serious contention for a championship in the near future. They should be looking to re-build around the 28-year-old, still-in-prime Paul George as quickly as possible.

This move would make complete logical sense, but the Thunder and their fans are so beholden to Westbrook that it’ll never happen.

2. The Lakers trade the King

Speaking of a franchise beholden to a player…

ESPN pundit Jeff Van Gundy has been a proponent of this cause lately, and on paper it makes sense for the Lakers coming off a disastrous 2019 campaign.

LeBron and the Lakers are in a similar situation to Westbrook and the Thunder. James is clearly past his prime, he’s on the books for an absurd amount of money over an absurd amount of time, and it’s not that hard to see a team in genuine contention for a title breaking the bank to get him in an attempt to over the hump.

LeBron’s 2018-19 season has been well-documented elsewhere, and it’s not worth going in to in depth. Suffice to say, despite his stats being as high as ever (27.4 points, 8.3 assists, 8.5 rebounds) his impact on the floor was nowhere near what it once was in his Miami/Cleveland heyday.

Now at the age of 34, and going in to his 17th season in the NBA (which is ridiculous in and of itself) it’s a simple truth that prime LeBron is something we are never going to see again.

With a young roster, plenty of cap-space, and potentially a high lottery pick in the 2019 NBA Draft, would it be worth Pelinka and co. testing the waters to see what they can stir up? Of course.

Would a team like Boston, or Philadelphia or even the Clippers actually contemplate mortgaging their futures for one of the greatest players in the history of the game? Unlikely, but what’s the harm in trying.

His on-floor impact is but a small sliver of the LeBron James experience. His jersey sales are off the charts, people travel across continents and pay exorbitant prices for tickets to see him play, and he’s arguably the biggest celebrity in a town already chock-full of them. He has the clout to basically veto any move the LA front office try to make, and financially, there is just no way in hell this is a viable option for the Lakers.

But, it’s really fun to think about, and isn’t that the point?

1. The Clippers win the AD sweepstakes

Every indication since Anthony Davis’ February trade-demand has been that he’ll end up in LA playing with the Lakers and LeBron James at some point in the near future.

So just imagine the pure, blissful anarchy that would erupt if the Clippers managed to out-bid their cross-town rivals for the superstar centre.

Sure, it does seem like AD would prefer to go to the Lakers. He and superstar agent Rich Paul appeared hell-bent on ensuring he got there before the trade deadline, but the deal got stuck in the spokes of a Pelicans organisation apparently (and understandably) determined to get the best possible value out of the best player in franchise-history.

After all that it looks as though New Orleans couldn’t really give a stuff about where Davis ends up so long as they can extract every last cent on the dollar for him.

So, what makes AD to the Clippers weirdly feasible?

Firstly (and it’s obviously worth taking this with a grain of salt), Davis stated in a February interview that [apart from the Pelicans] “All 29 other teams are on my list.” Whether or not that was the truth, making that statement makes it difficult for Davis to now refuse to go somewhere if that team can offer the Pelicans an outrageously good trade package.

Secondly, and as pointed out in our recent article, the Clippers could free up as much as $59.6 million in cap space this offseason. Not only would that be more than enough to take on Davis’ $27,093,019 contract for 2019-20, but it would also leave room for the signing of a superstar free-agent. Oh, I don’t know, say – Kawhi Leonard? Imagine a combination of Lou Williams, Leonard and Davis, with role-players like Landry Shamet, Patrick Beverley and Ivica Zubac waiting in the wings. That’s an attractive-looking trade destination for a player like Davis.

Finally, and most importantly, the Clippers have a BUNCH of assets they can offer up in a trade package. Danilo Gallinari, Montrezl Harrell, Shai Gilgeous-Alexander and Shamet are all contracted on decent deals for next season, and could form an attractive nucleus for Alvin Gentry and co. to build around for the future. Just as attractive for the Pelicans would be the fact that the Clippers have two first-round picks they can play with, including Miami’s unprotected 2021 first-rounder they nabbed from Philadelphia in the Tobias Harris trade.

We honestly think this might go down. The pieces fit together perfectly and on paper it’s a win for both sides.

Any other crazy ideas?

Get in touch! Sportstips.com is now on Twitter, and we’d love to hear your wild theories for this upcoming offseason.