Another big week of NFL action sees some players cementing their spot in the top half of the rankings. 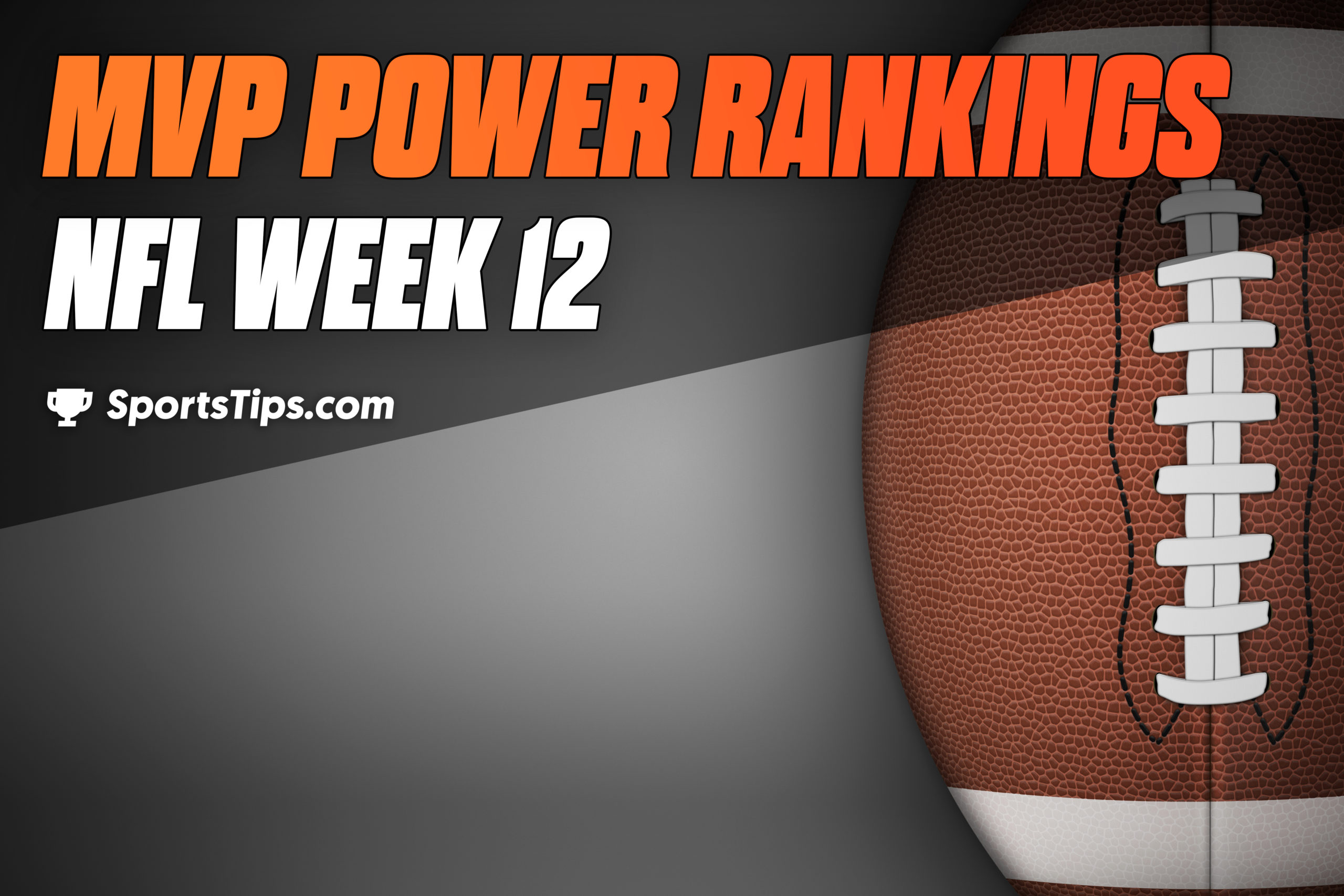 Week 11 of the NFL saw the top half of the SportsTips’ NFL MVP Power Rankings, beginning to take shape, as there have been movers in the bottom half of the rankings. Have a look at this weeks MVP power rankings!

Mahomes had an almighty impact in his side’s last-minute win over the Las Vegas Raiders, as he threw a touchdown pass right at the end of the game to give the Chiefs the win.

However, it wasn’t just that play that saw the favorite to claim the MVP (he is now -125) take control of the game. He also had an eye for the short passes that exposed the Raiders defense, as was evident in the Chiefs the first touchdown.

Every time he had the ball, the Chiefs looked a dangerous outfit, as he was picking out passes left, right, and center, and even through completions in the tightest of gaps.

He finished the game with 348 yards thrown, two touchdown passes, a completion percentage of 75.6 % as he completed 34 passes from 45 attempts.

Roethlisberger is finally getting the credit he deserves as he has now moved to second in the SportsTips’ NFL MVP Power Rankings. Big Ben is valued at +1600 in the NFL MVP market which means he is now the fifth favorite to win the award, after his performance against the Jacksonville Jaguars.

He was instrumental in his side’s win over the Jaguars, especially handing them their first touchdown. But it wasn’t just that, as it was his vision to get a pass away, as well as occasionally using fakes and play action, catching the Jaguars defense off guard.

Roethlisberger finished the game with two touchdown passes and 267 yards, but the game against the Jaguars was more about his vision than anything else.

With the win, Ben Roethlisberger has 8 career seasons with double-digit wins

After a pretty disappointing few weeks for Wilson, it seems that he may have found his confidence back. Wilson took the game on, not just with his passing but his running too, as he found plenty of spaces where he could use his evasiveness and leg power.

He linked up well with DK Metcalf, connecting for the Seahawks’ first touchdown and Lockett was the lead receiver with 67 yards and a touchdown of his own. Wilson was relaxed and composed, with the improved running game giving him plenty of time and space to make the right decision to get the pass away.

This was evident as he finished the game with two touchdown passes to his name and had a completion percentage of 82.1% (his best since week one). He the second favorite to win the NFL MVP (valued at +300) and is looking back to his best.

Rodgers started off with a bang early on, throwing all three of his touchdowns in the first half and helped his side gain yardage with what he does best, finding a pass from nothing. Despite throwing his third interception of the season early in the game, he did more good things than bad and he always found a way to get out of danger.

This was evident late in the fourth quarter, as he drove the Packers 60 yards up the field in just 1:22 of game time, allowing the field goal to be kicked to send the game into overtime.

Although his magic wasn’t enough to get the Packers out of jail as they narrowly lost to the Colts 31-34, it was a performance that shows Rodgers, the third favorite for the MVP with +500 odds, just needs to do what he does best by moving the ball down the field.

Cook played a really good game against the Dallas Cowboys, rushing for 115 yards and a touchdown, while receiving another 45 yards, continuing his fantastic form. Despite his performance, the Vikings loss caused his odds for the NFL MVP to increase from last week, as he is now +6600.

Cook’s touchdown towards the end of the first quarter was his 14th total touchdown for the season, but it was also his positioning that should be noted as he freed up space for his fellow teammates.

Despite his statline and the end result, his play over the last few weeks has opened up the offense for his team, showing he is more influential than the numbers.

Previous rank: Not in our top 10

With Drew Brees being ruled out and with no future NFL MVP odds on him, it means that  Derrick Henry has entered the race and he is currently at +5000 to win the award.

Henry linked up with his quarterback Ryan Tannehill early in the first half, but was nullified for much of the third quarter. He finally found an opening to show us a glimpse of what he could do with his powerful rushing in the fourth, as he seemed to find more holes in the Ravens defense.

It wasn’t just his rushing yards that should go noticed but his positional play too as he drew in the defense to help Tannhelill rush over for a two point conversion to tie the game and send it to OT.

However, his moment came in overtime when he ran for the 29-yard game winning touchdown. Henry also overtook Cook to become the rushing yard leader in the NFL with 1,079 yards to his name.

Murray didn’t get off to the start that he would have liked the Cardinals first two drives resulted in two 3-and-outs and seven total yards.

He made amends when he showed what his all-round abilities are, as he rushed a few yards but was surprisingly more influential with his arm, throwing 72 more yards than Wilson. At times though, it seemed that he didn’t know what to do when given the extra time and was sacked three times.

Murray threw for two touchdowns and no interceptions, providing a quick eye to get a pass away in close areas. This was even more evident when he came to life in the second half, as the Cardinals looked to play a far more quicker game style.

However, a few incompletions here and there, plus the loss means that Murray, although he played well, is behind Wilson in the SportsTips’ NFL MVP Power Rankings and he is now valued at +1400 for the MVP.

Most in the NFL 💨 💨 💨 pic.twitter.com/Xe7cqNfdXZ

Although the Buffalo Bills had the bye this week, Josh Allen remains in eighth spot because most of his competitors had a week to forget, as well as Allen being a key component in the Buffalo Bills’ rise.

So far this season Allen has been one of the in-form players in the NFL as he is ranked seventh for yards thrown with 2,871 to his name, and he has also thrown 21 touchdowns (eighth in the NFL). Despite having the week off, Allen has dropped to sixth favorite, valued at +2200 for the NFL MVP award.

While Jackson hasn’t had the greatest form in the last couple of weeks (evident with his odds as he is now valued at +12500), he did show glimpses of what he could do in his side’s overtime loss to the Tennessee Titans, as occasionally he showed good vision as well as creating enough time for him and his teammates.

However, he did throw a touchdown pass, but Jackson has been underwhelming and he finished the game with 17 completions from 29 attempts with a completion percentage of 58.6 % and only threw 186 yards.

Brady started the game quite well-hitting targets, and even setting up the Buccaneers for their first touchdown, and continued this for much of the first half where he often threw it hard and flat.

While he played alright for the first half, he trailed off in the second as he took too much time getting the ball away as he got sacked once and threw two interceptions. It may be harsh on Brady given the defensive style both the Rams and the Buccaneers played, but Brady couldn’t replicate the form he showed last week which saw him rise to number two in the SportsTips’ NFL MVP Power Rankings.

Brady still managed to find two touchdown passes for the game, however his completion rate on the other hand was at it lowest for the season at just 54.2 %, as he completed 26 passes from 48 attempts. Brady’s topsy-turvy tenure at the Tampa Bay Buccaneers has also seen his odds for the MVP rise to +3300 from last week.