Less than 24 hours out from the 2021 draft, the next generation of NFL talent are about to begin their careers as professional football players in the National Football League. 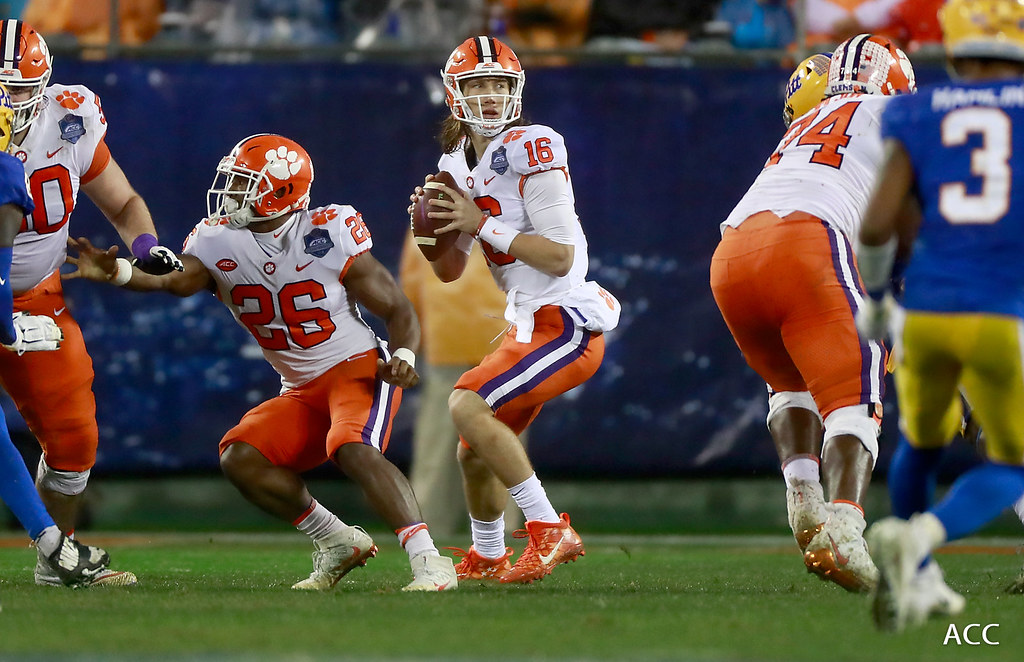 We’re less than 24 hours from the commencement of the 2021 NFL Draft! What does your team need? Who is your team going to take? All will be revealed on Thursday night!

Take a look at our mock draft for the top five picks in 2021 NFL Draft, with exact position odds courtesy of FanDuel.

There really isn’t much that can be said about Clemson’s Trevor Lawrence that hasn’t already been said, the kid is a deadset phenomenon. Possessing a deep and accurate arm, underrated athleticism and a mentality that has seen him find championship success at every level, Lawrence is the best quarterback prospect to come through the draft since Andrew Luck.

Trevor Lawrence and adidas make it official with a multi-year partnership. 🏈 pic.twitter.com/B2HC7Xe9zp

Having lost 10+ games in nine of their past 10 seasons, the Jags will be hoping that the 21 year old sensation can bring his winning ways to Jacksonville in 2021, and lead the franchise to success for years to come.

In what can only be described as a loaded quarterback draft class, the Jets have made it very clear that Zach Wilson is going to be their selection with the No. 2 pick in the 2021 NFL Draft. Wilson flexed his remarkable arm strength and accuracy at his pro day in March, which led to New York trading Sam Darnold to Carolina.

However, there are undeniably risks associated with the Jets picking Wilson. Coming out of BYU, Wilson was a one-year wonder who had the opportunity to pile on impressive stats in a weak conference that was made weaker due to COVID-19. His smaller frame has also raised questions regarding his durability, however the same questions were also asked of Russell Wilson and Kyler Murray and they have both turned out fine in the NFL.

Although Trey Lance and Justin Fields are both still on the board for San Francisco, we believe the 49ers will select Mac Jones with the No. 3 pick in the 2021 NFL Draft.

Given that the 49ers are just over one year removed from an NFC Championship and appearance in Super Bowl LIV, Kyle Shanahan believes that he still has a roster that is capable of winning and winning now if they have an accurate and durable quarterback.

Although he has had success for the 49ers in the past, Jimmy Garoppolo has managed to play more than six games on just one occasion in San Francisco, making a ready now / durable quarterback a necessity for the 49ers.

From an under-the-radar recruit to a National Champion and Heisman Trophy finalist. 🏆

QB prospect @MacJones_10 is ready to see his dreams come true at the @NFLDraft.

Having thrown for 4500 yards at a 77.4 completion percentage to go along with 41 touchdowns and just four interceptions in Alabama’s 2020/21 National Championship winning season, Jones is viewed as the more pro-ready option when compared to Trey Lance and Justin Fields. Both Lance and Fields are undoubtedly superior athletes with higher ceilings, however they will take longer to develop and establish themselves in the NFL.

Although Monday’s 2021 NFL Draft prop bets article stated that we can’t see Kyle Pitts being selected in the top five picks in the 2021 NFL Draft, recent information has confirmed that the Falcons are taking calls on potential trades for 32 year old future Hall of Fame receiver Julio Jones, which has propelled Pitts back into contention for a top five selection.

“[Kyle Pitts] would be the No. 1 receiver in this draft, and certainly the best tight end I’ve ever graded in 43 years.”

An incredible athlete at 6’6’’ and 246 pounds, Pitts is faster than linebackers, taller than safeties and bigger than cornerbacks, making him a truly unique NFL talent and a frightening prospect for any NFL defense.

Having caught 43 passes for 770 yards and 12 touchdowns in just eight games during his junior year with Florida, Pitts is arguably the best receiving tight-end prospect in the history of the NFL Draft.

The Falcons are far from locked into this selection or this pick, as trading down to collect assets may be in the franchise’s best interest. However, with Julio Jones up for trade talks and Matt Ryan turning 36 prior to the beginning of the upcoming season, it is looking like Pitts or a quarterback for Atlanta on Thursday (if they do decide to keep the fourth overall pick).

It’s looking like the mock draft trend is moving towards LSU’s Ja’Marr Chase for this pick, reuniting the wide receiver with his former quarterback in Joe Burrow for the 2021 NFL season. However, we are sticking with Penei Sewell at pick five for Cincinnati.

Common sense must prevail at some point as the quarterback position is the most volatile and important position in football. Joe Burrow was sacked 32 times in his rookie season, one of which resulted in the former No. 1 pick tearing both his ACL and MCL in Week 10 of the 2020 season.

As is evident in the 2020 and 2021 receiver classes, we’re going to see more Ja’Marr Chase-esque players in the coming years. If the Bengals do not start to strengthen up their offensive line, the talent of their receiving corps will not matter, as Joe Burrow will be battered and bruised on the sidelines.

Penei Sewell didn’t allow more than 2 QB pressures in any of his 21 games at Oregon pic.twitter.com/jfGcxpzWrx

Every move Kansas City have made since losing Super Bowl LV has been centered around strengthening their offensive line and protecting their half a billion dollar investment, Patrick Mahomes. Cincinnati should do the same on Thursday and select the 6-foot-5, 349-pound Sewell, who is the best pound-for-pound player in the draft.

The 2021 NFL Draft is less than one week away! If you want to catch up with all the latest information, make sure you visit our NFL hub page.