Our FREE NBA picks have the analysis and predictions you need before you place your bets on tonight's six games! 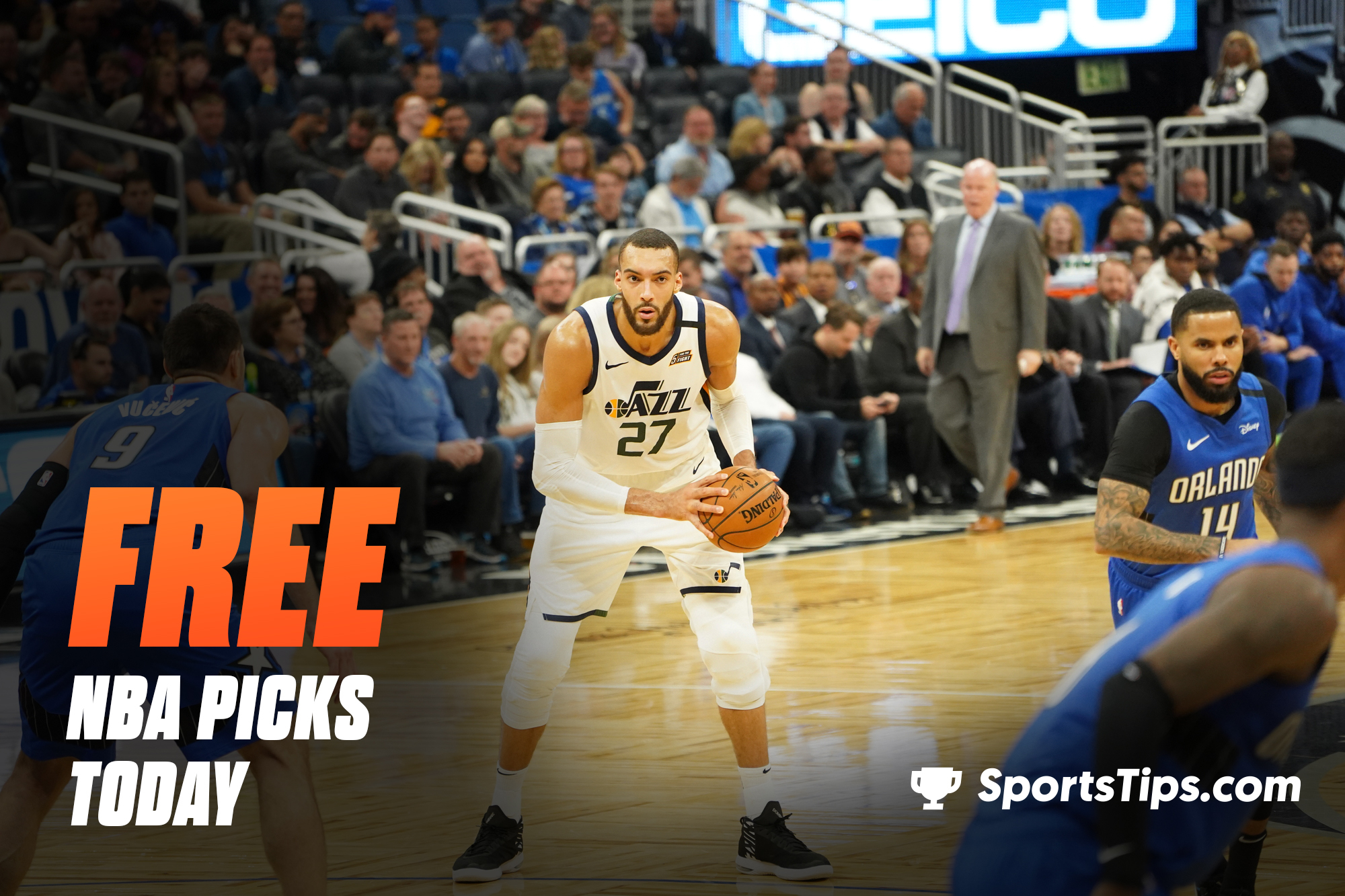 Our FREE NBA picks went over 50% again last night and we are dialling in on tonight’s six games to find some more winners.

The clash of the night is the Clippers and the Nets. LA holds the best record in the league right now and has two MVP candidates in Kawhi Leonard and Paul George while Brooklyn has the best offense in the league over the last two weeks and has two former MVPs in Kevin Durant and James Harden.

Brooklyn are slight favorites right now, but we are fading them and going with the Clips. Find out explanation and five other winners below!

The Toronto Raptors will be coming into this one with their tail up after beating the Orlando Magic by 13 points just two nights ago. That win snapped a three game skid for the Raptors while also being Orlando’s third straight loss.

The news only gets worse for the Magic, who will be without Aaron Gordon for at least a month after he sprained his ankle in Sunday’s loss. Before exiting after just 23 minutes, Gordon had 14 points and five boards, being Orlando’s third highest scorer for the game. Cole Anthony led the way with 16 while Nikola Vucevic had 15 and 14 rebounds with four assists and two steals, but Gordon is a massive hole to fill and there are no clear options to fill it.

The Raptors will be looking to take advantage of Orlando’s misfortune and make it two from two in this set whilst also setting themselves up nicely for a matchup with the Nets on Friday.

They can’t overlook the Magic but after Pascal Siakam had 30 points, 10 rebounds and three steals while Kyle Lowry had 12 points and a massive 15 assists in the win, they will be very confident. Fred VanVleet scored just nine points on 33% shooting, so they even have room for improvement in this one.

While the second leg will be played in Orlando, we likely would have still gone with the Raptors. The fact that Gordon is out means that we are definitely taking Toronto straight up and it will just be a matter of how big the spread is now.

The game of the night between two absolute powerhouses sees the league leading Los Angeles Clippers take on the Brooklyn Nets and their firepower big three, if they all play.

Kevin Durant sat out Friday’s win over OKC while James Harden missed Sunday’s loss to the Wizards, but we are expecting both to be in the lineup for this blockbuster nationally televised game.

The Clippers have won three straight and 10 of their last 11, only losing to the Hawks when both Kawhi Leonard and Paul George missed. Since the pair returned, LA have had two wins by an average of 20 points, most recently over the Knicks on Sunday. Leonard led six players in double figures with 28 while George had 17, eight and five assists.

They will need both their stars to be on top of their game, especially defensively against Durant, Harden, Kyrie Irving and the Nets. An interesting stat for Brooklyn since trading for Harden – they have the highest offensive rating in the league, that would be the highest of all time, whilst also having the worst defensive rating in the league, that would be the worst of all time. That sums up how the Nets play basketball and will continue to play basketball unless they change things up a bit.

In Sunday’s 146-149 loss to the Wizards, Durant had 37, seven boards and six assists while Joe Harris had 30 points on a career high eight triples. All five of the Brooklyn starters shot 50% or better from the field, but the other end of the floor was the issue.

The Clippers have the best offensive rating for the entire season whilst also leading the league in both three point and free throw percentage. Given how porous the Nets’ defense is, LA should be looking to light it up on their way to another win and extend their lead in the West.

The Grizzlies have dominated the Spurs in back to back games and are now winners of a league high seven straight games. They will now test themselves, on the road, against one of the top teams of the East, the Indiana Pacers.

Memphis moved to 6-1 on the road with their 31 point win over San Antonio last night and the positive was for this game, no starters played more than 26 minutes. Nine out of the ten Memphis players to check into the game scored in double figures led by Gorgui Deng’s 19 points on 80% shooting and nine boards off the bench.

The Grizzlies ended up with 11 steals, 11 blocks and just nine turnovers in the win and will be looking to carry that over into Indiana, as the Pacers have now lost two straight and three of their last five.

Ja Morant is one of two @NBA players averaging 20+ PPG and 7+ APG while shooting 50+ FG%. The other is Nikola Jokic.@JaMorant | #NBAAllStar pic.twitter.com/DTS27i41YR

The Pacers held a 13 point lead over Philly heading into the last quarter on Sunday but was outscored 15-37 in the final period to lose by nine. Indiana had a massive 17 turnovers and also sent the Sixers to the line 31 times, both of which will not win you games any time soon.

Both Malcolm Brogdon and Domantas Sabonis scored over 20 in the loss but the other three starters combined for 7/19 shooting and provided no help.

It is hard to look past a seven game winning streak, especially when the Grizzlies have a 6-1 record on the road. While the Pacers are expected to bounce back, the Memphis starters are rested after the blowout last night and they are 2-0 on the second night of back to backs anyway. Take the Griz as big road underdogs to extend their streak.

The Washington Wizards are coming off one of the biggest and most exciting victories of the season on Sunday night, but now have to back it up when they host the Portland Trail Blazers. Washington trailed by five points with under 10 seconds left but ended up beating the Nets by one point while the Blazers just allowed Milwaukee to put up 134, going down by 28.

Portland have gone just 2-4 since losing CJ McCollum and have now allowed at least 122 points in three of their last four games. Damian Lillard managed just 17 points in last night’s loss with Nassir Little being the hot hand with 30 points on over 61% shooting from the field.

Defense is definitely going to be an issue given Washington just put up 149 points last time out. Russell Westbrook had 41 points, 10 boards and eight assists while Bradley Beal chipped in with 37, with both shooting over 55% from the field and combining for just five turnovers.

That was just about as perfect as they could have played, offensively at least, but a glaring trend has emerged. The Wizards are 2-0 against the Nets whilst being 2-12 against all other teams in the league.

A couple of conflicting stats as Portland are 5-2 after a loss, fifth best in the league, but are 0-2 on the second nights of back to backs so far. Given how poorly they have been playing without McCollum, we are backing the Wizards to start piecing things together now they are back to full health.

The Detroit Pistons’ game in Denver was postponed last night due to a positive/inconclusive COVID-19 test from a Detroit player. They have had to undertake in depth contact tracing and testing to ensure no breakout has occurred, and because of this we highly doubt that tonight’s game against the Utah Jazz will go ahead.

But if it does, we are taking the home side to win and win big. The Pistons followed up a massive upset over the Lakers with a performance they will want to forget against the Warriors. Jerami Grant was the leading scorer with just 18 points and only one other Detroit player managed to score over eight points.

While we picked it, Utah surprised many when they suffered an upset loss to Denver on Sunday, snapping their 11 game winning streak. The Jazz had seven players score in double figures, led by Bojan Bogdanovic’s 29, but they gave up 128 points and allowed the Nuggets to shoot a blistering 18/28 from deep.

The Jazz will be looking to come out hard and bounce back from their down performance, highlighted by their 3-1 record after a loss so far this season. Meanwhile, we don’t know who from Detroit will be able to play given the contact tracing that is taking place. Most sportsbooks don’t have this game available for obvious reasons, but if it somehow goes ahead, jump on the Jazz to get the job done.

Last time we saw the Boston Celtics was their loss to the Lakers in that one point thriller on Saturday, handing the men in green their second straight defeat. They will be looking to turn things around to start their five game West Coast road trip against the Golden State Warriors tonight.

While the Celtics fell on Saturday, Golden State had one of their biggest wins of the season, defeating the Pistons by 27 points. Steph Curry led with way with 28 points, five rebounds, seven assists, two steals and six triples, with many considering him as an All Star Starter for his play so far this season, helping the Warriors to 11-9, seventh in the West.

Kerr said, simply, it’s Draymond. Said after Green got a game under his built, he took over on defense. Since then, Dubs are 4th in DRTG (106.7)

While that is impressive, Golden State have been boosted by four games and wins against Detroit and Minnesota, both of whom are tied for the worst winning percentage in the league. Boston is far superior to both of those teams and pose as a tall ask for the Warriors.

A positive for the Warriors and Curry in particular is that Marcus Smart will miss this contest with a calf strain, but the Celtics have plenty of men that can step up, led by the three-pronged attack of Jayson Tatum, Jaylen Brown and Kemba Walker.

In Saturday’s loss to the Lakers, Tatum had 30 and nine boards while Brown had 28, both shooting above 66% from the field. The pair will be getting some very close attention from Andrew Wiggings and Kelly Oubre Jr in this one, with the Golden State duo being two of the best defensive wings so far this season.

Boston are just 3-4 after a loss whilst also being 0.500 on the road while the Warriors are 8-4 at home and have some pretty impressive wins under their belt. This will be a classic matchup and could go down to the wire, but Golden State are better equipped for the win in this one.