Enjoy our picks and predictions for Day 6 of the 2021 Australian Open! 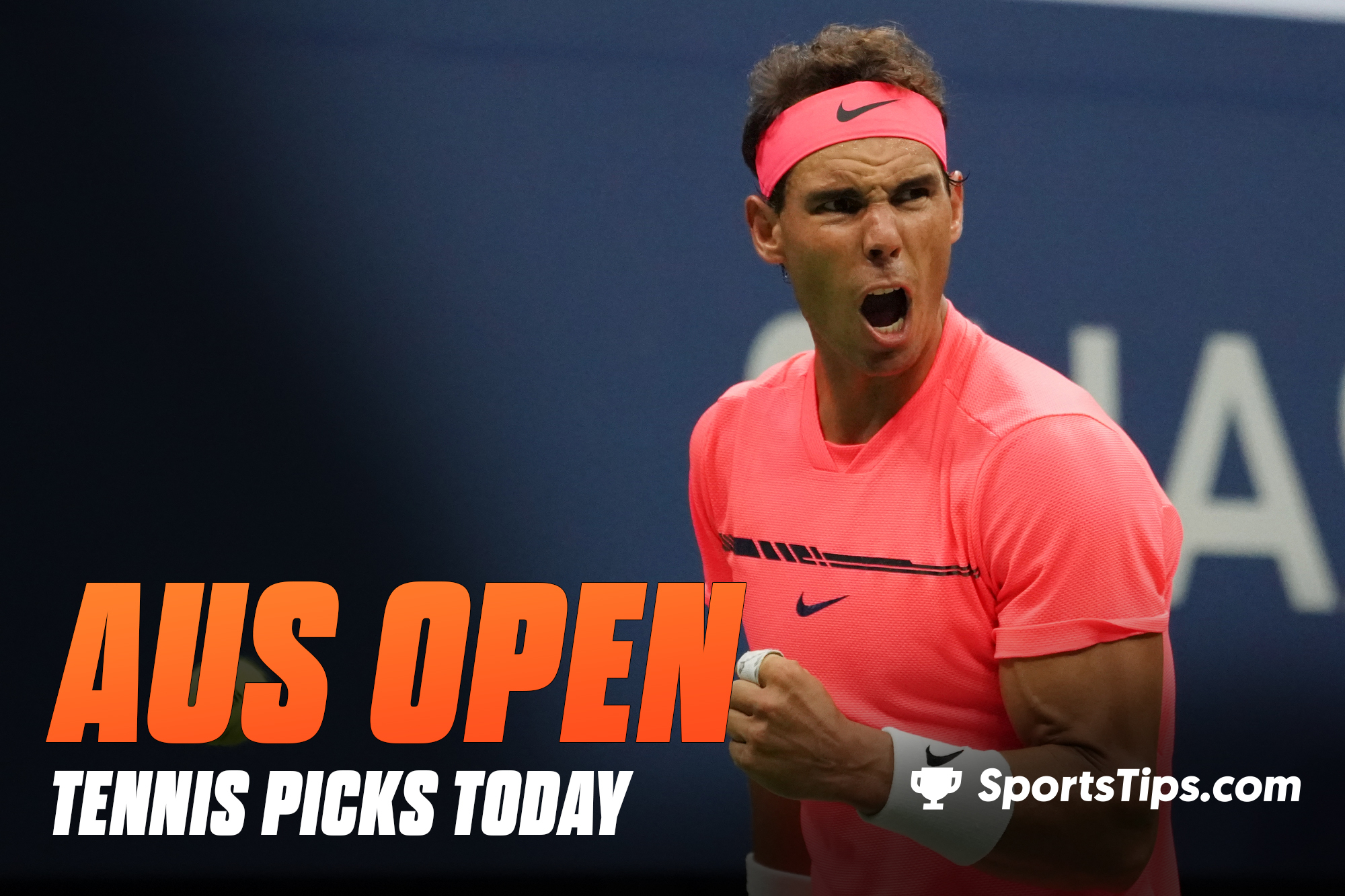 Kick off your weekend early by watching the best players in the world do battle at Melbourne Park! Round 3 of the 2021 Australian Open wraps up tonight as matchups for Round 4 begin to take shape!

Enjoy our pre-tournament and daily Australian Open picks and predictions for the four highest seeded matches on both the womens and mens fixture!

The two Karolina’s from the Czech Republic are preparing to face off at Melbourne Park, with Karolina Muchova and Karolina Pliskova both advancing to the third round of the Australian Open having not dropped a set in their opening two matches.

After dropping just two games in her first round matchup, world No. 6 Karolina Pliskova comfortably advanced to the third round with a 7-5, 6-2 victory over Danielle Rose Collins.

World No. 27 Karolina Muchova has also hardly been tested in her opening two matches, progressing to the third round with comfortable 7-5, 6-2 and 6-4, 6-1 victories.

Pliskova and Muchova are currently 1-1 in the head to head for their career matches, as Pliskova won their first matchup in straight sets at the 2019 Australian Open, before Muchova redeemed herself with a hard-fought 4-6, 7-5, 13-11 win at Wimbledon, also in 2019.

After suffering a shock loss to Collins last week, Pliskova gets her revenge in straight sets! 🇨🇿🔥

Pliskova usually thrives in the Australian leg of the women’s tour, being a three time Brisbane International champion. In the 2021 running of the event, the former World No. 1 was embarrassingly defeated by Danielle Rose Collins in the Round of 16 earlier this year.

Having now avenged that defeat in the second round at Melbourne Park, Pliskova will have received a huge confidence boost for the remainder of the tournament.

The sixth seed is looking poised for a deep finals run at the 2021 Australian Open and although Muchova will put up a fight, Pliskova will advance to the fourth round following the third matchup of their career.

World No. 5 Elina Svitolina, justified her top five seeding and ranking in the second round with a convincing two set victory over young star Coco Gauff.

Svitolina has been undervalued throughout this tournament in both her first and second round matchups, however after defeating Gauff on Wednesday it is clear that the 26 year old Ukranian is the real deal. Svitolina will face world No. 28 Yulia Putintseva in the third round.

Putintseva has dropped a set in each of her two matches (both against players ranked outside the top 40) so far this tournament and will have to make plenty of adjustments to compete with Svitolina on Friday.

The pair have played seven competitive matches together as pro’s, with Svitolina having won the past five of their encounters. Although she has not started 2021 playing her best tennis, Svitolina has started the Australian Open in solid form and as a two time quarterfinalist at Melbourne Park (2018 and 2019), Svitolina should comfortably advance to the fourth round for the third time in four years.

Especially when coming up against Putintseva who has already dropped sets against non top 40 ranked players.

World No. 4 Daniil Medvedev has continued his hot start to 2021 with a 6-2, 7-5, 6-1 victory over Roberto Carballes Baena in the second round at Melbourne Park.

World No. 33 Filip Krajinovic will be tasked with trying to slow down and upset Medvedev in the third round. Krajinovic has won his opening two matches in four sets, defeating world No. 197 Robin Haase and world No. 59 Pablo Andujar in the first and second rounds.

Surprisingly, Krajinovic leads the head to head matchup between the two, having defeated Medvedev at the Indian Wells Masters in 2019. However, not only has Medvedev improved in the past two years but he is also in a rare vein of form, making him the only logical pick to win this matchup.

Medvedev’s sturdy defense, combined with his ability to spontaneously hit winners with both power and finesse will set him up nicely against Krajinovic who often tries to push opponents deep in the course with his brutish strength.

World No. 12 Belinda Bencic hasn’t quite looked at her best so far this tournament, dropping a set in both of her opening two wins. However, Bencic navigated her way past a tricky and experienced opponent in the second round, defeating two time Grand Slam champion Svetlana Kuznetsova. Bencic will face world No. 16 Elise Mertens in the third round at Melbourne Park.

Mertens is yet to drop a set in her opening two matches having comfortably defeated world No. 83 Leylah Fernandez and world No. 94 in the first and second round.

Unlike Bencic, Mertens has been one of the form players on tour to start the new year, defeating the likes of Kaia Kanepis and Elina Svitolina on her way to claiming the 2021 Gippsland trophy earlier this year.

Her ranking may be superior, however Mertens form is undeniable and we like the Belgian to win this third round matchup, as she is favored to do despite her inferior ranking.

Although she has an inconsistent service game, Mertens ability to return the ball has proved a valuable asset on these faster Australian courts as her ability to counterpunch will be the reason for her convincing round three win over Bencic.

Andrey Rublev continued his confident start to the 2021 Grand Slam season, building on his three set first round victory with a second consecutive straight sets win against Thiago Monterio in the second round.

Rublev was not broken once in his round two encounter, which means he has only been broken once from the eight break points he has faced so far at Melbourne Park.

His opponent for Friday, world No. 65 Feliciano Lopez hasn’t been quite as solid to start the Australian Open, winning his first round match in four sets and his second round match in five.

39 years old Feliciano López comes back from two sets down to beat 31st seed Lorenzo Sonego and reach the 3rd round of the #AusOpen vs Rublev.

What a great win for the Madrid Open director! pic.twitter.com/APEgkoA18A

This match has the makings of a third consecutive straight sets Rublev victory, as the seven seed will advance to the third round having comfortably defeated three non top 50 ranked players three sets to love.

After a convincing first round victory, Stefanos Tsitsipas was put to the test in the second round, coming up against Australian Thanasi Kokkinakis. The match went to five sets with Tsitsipas coming out victorious in the last.

Although Knokkinakis was very impressive against the world No. 6, Tsitsipas only faced three break points and was not broken once, with Kokkinakis’ two sets being won in tiebreaks.

Not dropping a service game is a sign that a player is in form, and although Kokkinakis outperformed him in the two tiebreaks, Tsitsipas could have easily wrapped up that game in three or four sets.

Like Tsitsipas, world No. 95 Mikael Ymer has played more sets than what he would have liked in his opening two matches, being forced to five and four set matches in the first and second round.

This will suit Tistsipas as both players will be coming into this game having played recent five set matches, eliminating the chances of the Greek losing due to his own fatigue or his opponent having more energy.

Tsitsipas has beaten Ymer in the one previous encounter between the two players and he should do so again in their second encounter, once again holding serve and regularly breaking Ymer to win this one in three sets.

In the first set of her second round matchup against Daria Gavrilova, world No. 1 Ash Barty picked up where she left off in the first round, winning 6-1. At that point, Barty had won three sets and only given up one game. Gavrilova was much more capable in the second, forcing a tiebreak.

However, Barty won 9-7, resulting in her second straight sets victory and advancing her to the third round. World No. 32 Ekaterina Alexandrova has also started the tournament well, with back to back straight sets wins against world No. 89 Martina Trevisan and world No. 59 Barbora Krejcikova.

Alexandrova is certainly capable of defeating the best players in the world, with victories against Grand Slam champions Iga Swiatek and Simona Halep at the Gippsland Open earlier this year.

However, Alexandrova’s hard hitting, powerful style of play will suit Barty in their matchup, as the world No. 1 enjoys to manipulate the pace of the ball and force her opponent to approach the net.

Barty’s form is as good as anyone’s on the tour and she should advance to the fourth round with another confident win. Although it will not be as easy as her opening two matches.

At this stage in his career and with 20 Grand Slam singles titles to his name, we know for a fact that Rafael Nadal will cruise past world No. 69 Cameron Norrie in the third round at Melbourne Park, with the health of a nagging back issue the only reason to doubt the world No. 2.

Norrie on the other hand has given up a set in each of his opening matches against world No. 26 Daniel Evans and world No. 183 Roman Safiullin.

At 32 years of age, this is Norrie’s first Australian Open campaign that has seen him progress out of the first round. On the quest to become the stand alone winningest Grand Slam champion of all time, Nadal will advance to the third round at Melbourne Park with another confident victory, as his relentless desire to win and brutish power on his shots will see him overcome Norrie.

However, as we get deeper into the tournament the troublesome back issue may begin to show up on the court, which gives Norries a chance of competing. Although Nadal’s class and experience will see him prevail in straight sets and advance to round four.