Our free NHL picks have the winners for all 10 games on a big Saturday of NHL action! 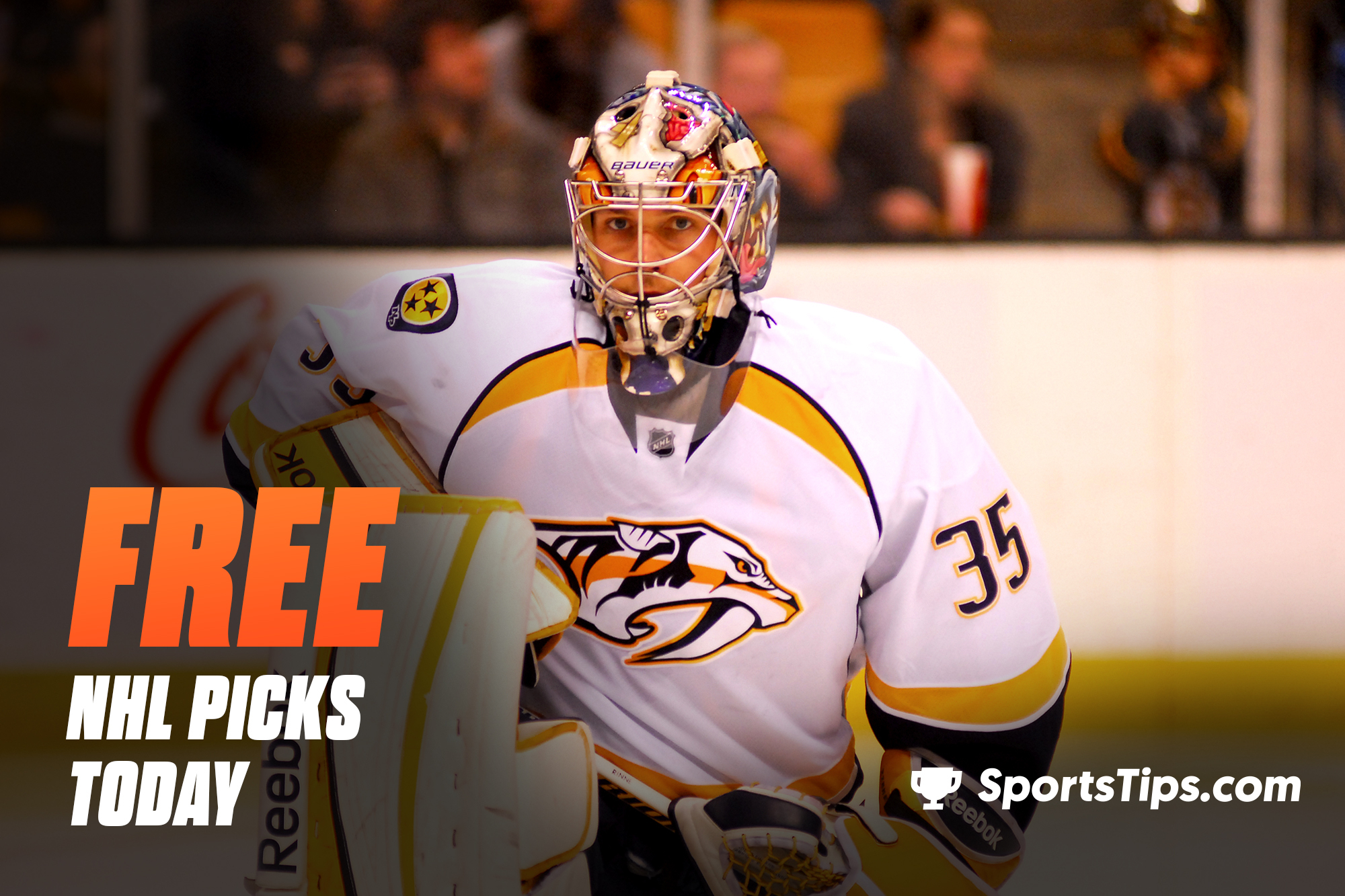 There are 20 teams in action for 10 huge games that headline a massive Saturday on the first weekend of the 2021 NHL season!

In what was one of the most unpredictable results of Thursday’s fixture, the Devils were competitive against the Bruins, scoring twice in the final period to force the game to overtime and then a shoot out, before Boston sealed the game 3-2.

There is no doubt that Boston was the better team on the ice on Thursday, with New Jersey allowing them 37 shots on goal compared to their 22. Mike Grzelky alone had six shots on goals for the Bruins to go along with his one assist.

However, the Bruins lacked the poise up front to put the game to bed in regulation or overtime. When the two sides meet again for the second game in their regular season series, Boston should once again be able to create many more opportunities on offense and have better luck finding the back of the net.

Despite finishing the 2019/20 season at the bottom of the Pacific Division, the San Jose Sharks couldn’t have got off to a better start in 2021, knocking off a divisional rival in their opening game of the season with a 4-3 shootout victory over the Arizona Coyotes.

Tomas Hertl was the most damaging man on the ice in the sharks season opener, scoring two of the Sharks three goals while also assisting a third. Evander Kane also contributed a goal and two assists to upset the Coyotes at home.

It became quite evident in the first period that it was both sides (namely Arizona’s) first game of the season, as Arizona looked rusty and sloppy, allowing two Sharks goals in the opening period.

The Coyotes did mount a comeback, outsourcing San Jose 3-1 in the final two periods to force the game to overtime, however the Sharks got the last laugh in the shootout.

When hosting the Sharks for the second game of their regular season series on Saturday afternoon, Arizona will carry the 3-1 form from the second and third period into their second game against San Jose, securing an important home victory and improving their record to 1-1.

After dropping their first game of the season on opening night, the Canadeins are headed to Edmonton to take on the 1-1 Oilers. Montreal faced their arch rivals in the Toronto Maple Leafs on Wednesday night and were defeated 5-4 overtime.

Josh Anderson found the back of the net twice, while Johnathon Drouin (three assists) and Jeff Petry (two assists) were the Canadiens best facilitators. After dropping their opening game of the season, the Oilers bounced back on the second night of their back to back against Vancouver, winning 5-2 and improving to 1-1.

Connor McDavid bagged a hat-trick in Edmonton’s second game against Vancouver while Leon Draisaitli recorded his fifth assist of the season, contributing to four of the Oilers five goals.

When Montreal and Edmonton face off for the first time this season, the Oilers should carry over their strong form from Thursday’s win, claiming their second victory from their third consecutive game at home.

The Islanders and the Rangers got their 2021 seasons underway at Madison Square Garden on Thursday night, with the Islander earning the bragging rights in their season opener, shutting out the Rangers with a 4-0 victory.

Nick Leddy assisted two goals while Anders Lee scored one and assisted another for the Islanders. However, Semyon Varlamov saved all 24 of the Rangers shots on goal that was the key to the Islanders success.

In what can only be described as a lacklustre performance from the Rangers, they were held scoreless on offense while also allowing the Islanders to take 33 shots on goal defensively.

The Rangers gave no reason in their season opener to believe that the result will change on Saturday night. Expect another low scoring Islanders victory against their cross town rivals.

The Carolina Hurricanes will stay in Detroit for their second consecutive game against the Red Wings. In their season opener on Thursday night the Hurricanes made easy work out of the Red Wings, showing just why Detroit were comfortably 2019/20’s worst regular season team.

Carolina won the contest 3-0 however it could have been a much greater margin with the Red Wings defense allowing 42 shots on goal. In what can only be described as a rough night for Detroit, Carolina completely negated the Red Wings offense only allowing 14 Detroit shots on goal through the three periods.

Expect more of the same when the two sides meet again on Saturday night as Detroit showed no reason to suggest that they will improve for the second game of their regular season series against Carolina.

The Hurricanes will once again dominate offensive opportunities and should be able to record another comfortable +2 score victory and conclude their visit to Detroit with a 2-0 record.

Despite missing the playoffs in 2020, the Ottawa Senators got their 2021 season off to the perfect star with a win over the Toronto Maple Leafs on Friday night.

The Maple Leafs scored a goal in all three periods, however a three goals second period from the Senators proved to be the difference, with the match finishing 5-3.

Toronto are now 1-1 to open the 2021 season after defeating the Canadiens 5-4 in overtime on opening night. Despite Friday’s scoreline, expect a lower scoring contest when the two sides meet on Saturday for the second game of their back to back, due to neither Toronto (23 shots on goal) nor Ottawa (24 shots on goal) creating a lot of scoring opportunities in their season opener.

Toronto have opened as favourites to split the opening to games of their regular season series at 1-1. However, we like the Senators to record a second consecutive win at home over their Atlantic Division rivals.

The Nashville Predators will host the Columbus Blue Jackets for the second consecutive game on Saturday night after taking a 1-0 lead in the regular season series on Thursday night.

The Predators captured a 3-1 victory over the Blue Jackets in an evenly shared performance on offense with all three goals scored and assisted by different Nashville players.

The Blue Jackets scored just once from their 30 opportunities on Saturday, netting the opening goal of the game before allowing the next three predators scores.

When the two sides meet again on Saturday night expect another relatively even performance (34 shots on goal to 30 in favour of Nashville), with the Predators once again capitalizing on their opportunities due to their well rounded offense.

The Minnesota Wild and the Los Angeles Kings got their 2021 seasons underway at the Staple Centre on Thursday night. The Wild secured a 4-3 overtime victory on the road in the first of two straight matches against the Kings.

Kirill Kaprizov scored one of Minnesota’s four goals while also being involved in facilitating another two. Jeff Carter found the net with one of his seven shots on goal for the Kings however it was the Wild that dominated offensively, with 34 shots as a team.

The two teams will face off again on Saturday in the second game of their regular season series. In terms of the playoff picture, both sides will be vying off for a bottom four playoff spot in the West.

However, as was the case in the 2019/20 season, the Kings offense does not look capable of putting up a winning score against a quality opponent and this game will finish very similarly to their season opener. Minnesota wins but the Kings hang around on their home floor.

The Vegas Golden Knights got their quest for a 2021 Stanley Cup appearance off to the perfect start defeating the Anaheim Ducks 5-2 in their season opener.

Vegas shared the load offensively with all five goals coming from different Golden Knights players, while marquee offseason signing Alex Pietrangelo got his first assist as a member of the Vegas Golden Knights.

Max Comtois scored the Ducks two goals in the opening period as both sides went to the first break with two goals. Vegas then scored three goals in the final period to put the game to bed.

When the two sides meet for their second matchup of the season Vegas should once again comfortably defeat Anaheim, recording a second consecutive +2 score victory at home as they look to make a strong start against a weaker Pacific division rival.

The 1-1- Canucks will face the 0-1 Flames in Calgary for an early season Pacific Division matchup. Vancouver split their opening two games against Edmonton winning the first and losing the second as they head into their third consecutive away game of the season.

After claiming a 5-3 victory over the Oilers in their season opener, Edmonton flipped the script the very next night defeating the Canucks 5-2. Quinn Hughes added one assist to his season tally (4), but it was in vain as Vancouver fell to 1-1.

Both sides will be desperate to bounce back from their disappointing losses when they match up on Saturday. However if Vancouver brings the same level of play that they did in their second game against Edmonton, Calgary will record their first win of the season at home, justifying their superior finish on the 2019/20 regular season table in the Pacific Division. .

*Odds and spreads correct at time of publication, courtesy of PointsBet & FanDuel.