NFL Draft: Best Picks from the First Round

Kyler Murray may deservedly have been the toast of the NFL world after being taken with the number 1 overall pick by the Arizona Cardinals, but it’s always worth highlighting those picks that may not have got the fanfare they deserve.

Whether it was due to injury, poor form in the 2018 college season, or just overall front-office incompetence, some players slipped way further down the first round board than perhaps they should.

In almost all of the cases below, these guys are poised to come straight in to their new teams and make an immediate impact at the next level.

We’ve dug through all 32 first round choices and picked out the top 6 best; whether that’s because someone slipped too far, or because they’re a perfect fit on their new team; or a combination of both.

Of all the picks in the 2019 draft (maybe outside of the Cardinals taking Kyler Murray at pick 1), this one by the Redskins received the most publicity – and for good reason.

The Redskins snagged an absolute steal by landing Haskins (who some analysts rated as the best quarterback prospect in the draft) with a mid-first-round pick.

The Ohio State product threw for 4,831 yards, 50 touchdowns and just eight interceptions in a standout season for the Buckeyes. In his one and only year starting in college, Haskins went at 9.1 yards per attempt, and completed a ridiculous 70% of his passes. He has proven repeatedly, although renowned for his athleticism, that he can make reads (evidenced by 22 touchdowns and just 2 interceptions when blitzed) and take care of the ball in a pro-style offense.

Most importantly for the ‘Skins, he looks ready to step straight in to the starting QB role left vacant by virtue of Alex Smith’s horrendous knee injury. Washington’s head coach Jay Gruden has a brilliant offensive mind (despite Washington’s recent struggles with the ball), and every indication is that Haskins will be have an instant impact at the next level.

All while being the third QB taken in the draft.

Pick 7 is high for a steal, but there was a lot of chatter pre-draft that Allen could’ve gone in the top 5, or even top 3.

The 21-year-old linebacker out of the Kentucky Wildcats had an outstanding senior season. Among other honours, he won the Chuck Bednarik Award (for the best defensive player in college football), was SEC Defensive Player of the Year, and First Team All-SEC.

The Jags had a down year in 2018 after making the AFC Title game in 2017, and Allen is the perfect fit for a defense already rated one of the best in the league. 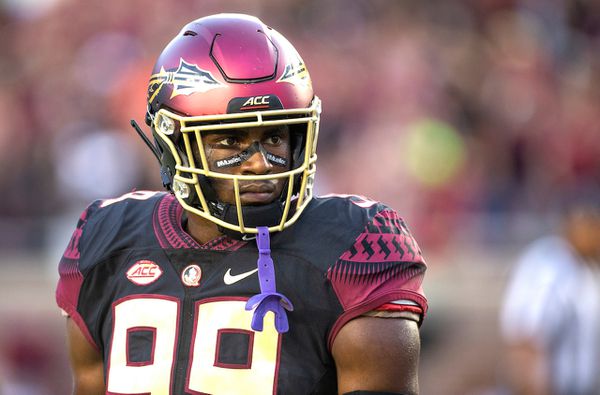 Even though the new San Francisco 49ers defensive end Nick Bosa was universally rated the best outside pass-rusher in this draft class, by most metrics Brian Burns was not far behind.

For example, Footballoutsiders.com rated Burns as the best pass-rusher in the draft thanks to his attractive combination of college production and freakish athleticism.

That’s the college production – the freakish athleticism is where Burns really stands out. He ran a 4.53-second 40-yard dash at the NFL Combine, the exact same time that Jadeveon Clowney recorded back in 2014.

The knock on him has always been his weight (or lack thereof), but clocking in at 249 pounds (113kg) at the Combine should have put paid to those doubts.

Arguably, Burns was at least the 2nd best pass rusher in the class, and yet fell to the Panthers at 16. That’s a bona fide steal.

All indications are that if it wasn’t for undergoing surgery in March for a torn labrum, Jerry Tillery would have been a high first-round pick.

As it was, he fell to the already-defensively-stacked Chargers at the back-end of the first round.

The Notre Dame product racked up 11.5 sacks in two years in South Bend, and reportedly played much of the 2018 season with that torn labrum, displaying a level of toughness that NFL franchises tend to covet.

Tillery is a 6-foot-6, 295-pound behemoth, who in his college career displayed a tendency to terrorise some of the best quarterbacks in the nation on the interior at Notre Dame. His 4.33-second short shuttle and 115-inch broad jump at the Combine indicate that even at that size he has retained athleticism.

The most intriguing thing for Chargers fans is the prospect of seeing Tillery lined up alongside Joey Bosa and Melvin Ingram – one of the leage’s best edge duos. Tillery is a perfect fit on the interior for a defense only really missing a pocket-pushing defensive tackle to get in the face of opposing quarterbacks. He’s also a perfect fit to fill the space left by Darius Philon up front.

This was the perfect late-round pick by the Chargers; speculative, but with enormous upside.

Bleacher Report rated this pick “the steal of the draft”, and for good reason.

Entering the 2018 season many analysts had Oliver right at the top of the board, and BR’s Matt Miller projected him as the second overall pick as late as August 2018.

The Houston D-lineman stands at 6’3″, 292 pounds, which probably isn’t the perfect size for an interior defender, but it’s worth noting that Aaron Donald (who Oliver is often compared to) is only 6’1″ and weighs in at 280 pounds.

Despite missing four games with a bruised knee Oliver finished the 2018 CFB season with 54 tackles (14.5 for loss) and three sacks in only 8 games. In 2017 he won the Outland Trophy, given to the nation’s best college football interior lineman.

The stats though only tell part of the story. At Houston, Oliver was often lined up as a nose tackle right over the centre in three or four man front and forced to try to defeat double teams. Understandably, this somewhat curtailed his unique combination of ridiculous speed off the snap and immense bull-rushing power.

When let loose between the center and guard, or between the guard and tackle, in the words of Skip Bayless, Oliver “jumped” off the television screen.

He is also the perfect fit for a roster that just lost franchise legend Kyle Williams to retirement. Another year, another magnificent draft pick by Bill Belichick and his New England Patriots.

Harry’s strength lies in his versatility; equally adept at lining up in the slot as he is on the outside, but also with the tools to be a standout blocker if given the task. His route-running is already at an advanced level, with clear evidence of swings, slants, fades and hitches on his college tapes.

At 6 foot 3 and 216 pounds it’s also obvious that his catch radius and physicality is a great fit for the NFL.

Importantly, Harry fills a glaring receiving hole on the New England roster left by the retirement of Rob Gronkowski and the well-documented off-field issues suffered by Josh Gordon.

He’s coming off coming off back-to-back 1,000-yard+ seasons for Arizona State, and caught  17 touchdowns over those two seasons. There’s an argument to be made that Harry was the best available receiver in this year’s draft, which makes it all the more remarkable that he fell to the last pick in the first round.

A receiver who has often been compared to Dez Bryant lining up next to Julian Edelman in the slot is a scary prospect for opposition defences, and all the signs point to this being another perfect fit for Tom Brady and the Pats’ offense.

Got any other draft steals? Hit us up on Twitter! https://twitter.com/SportsTips_01