As soon as it became clear by the end of the 2018-19 NFL season that the Arizona Cardinals would have access to the number 1 pick in the 2019 NFL Draft, the thoughts of the NFL world turned towards what they would do with it.

For most, it’s almost a morbid fascination. The Cardinals have been a picture of instability in recent times and it’s kind of interesting to see how badly they’ll manage to f**k this up.

Cardinals GM Steve Keim is notoriously erratic, and over the offseason was arrested under suspicion of DUI. Despite (almost) leading Arizona to the Promised Land in the mid 2010’s, a series of poor decisions from Keim has left Arizona floundering in the depths in which they now find themselves mired.

In 2017, Arizona went 8-8, took potential franchise QB Josh Rosen in the first round of the 2018 draft, and put highly-rated head coach Steve Wilks in charge to replace the retiring Bruce Arians.

Rosen had a disappointing start to his career, in part due to a porous offensive line, but also admittedly due to some distinct rookie foibles. The jury remains out with the question of whether those flaws can be ironed out with the help of a decent roster.

On December 31 of last year, Arizona fired Wilks after going 3-13 in 2018, and replaced him with Kliff Kingsbury; a guy who had just been shown the door at Texas Tech following a 5-7 college campaign.

Kingsbury comes out of the college system with a reputation for finding and/or mentoring star quarterbacks. He famously saw the hidden qualities in Baker Mayfield and Patrick Mahomes when almost no other programs thought they were good enough for the college level (let alone to star in the NFL) and also played a significant role in the outstanding college careers of Johnny Manziel and Case Keenum. We’ll ignore how they’ve transitioned to the NFL.

The number 1 pick in this year’s draft offers the Cardinals franchise a chance at some much-needed stability, provided, of course, they make the right decision as to what’s to be done with it.

So, what are their options? Let’s find out.

1. Trade the pick, go all in on Josh Rosen

Kyler Murray is clearly the best, potentially franchise-altering prospect in the draft; there’s little to no debate about that. If the Cardinals believe they’ve already found their future at the QB position (i.e. they have faith in Josh Rosen moving forward), there’s a pretty convincing argument to be made that it makes little sense for them to take a guy like Nick Bosa if he’s not worth spending the number 1 pick.

Logically, trading the top pick makes the most sense for a franchise who spent a third and fifth round pick last season to move up to pick 10 and take Rosen where they did. Keim also gave Rosen a $10.9 million signing bonus, which would mean any trade involving him would also involve the Cardinals copping $14.4 million in dead money.

If Keim can see the sense in sticking with Rosen he’d want to start making calls to teams short at the QB position. At a cursory glance, the Oakland Raiders at pick 4, the New York Giants at 6 or the Miami Dolphins at 13 are all potentially in the market for a quarterback and could be persuaded to trade up.

So, what would the Cardinals be after in any pick trade? The most recent example we have of a similar situation is the Titans/Rams trade back in 2016. There, the Rams gave up two first-rounders, two second-rounders and two third-rounders in return for the top pick, plus a fourth and sixth-round pick in order to trade up for Jared Goff.

Any package in this year’s class would want to be comparable. The obvious advantage of such a move would be that the Cardinals would have the draft assets to build around Josh Rosen. They may not be able to get Nick Bosa, but there’s an outside chance if the replacement pick remains in the top 5 that they’d still be able to nab up one of Alabama defensive tackle Quinnen Williams, Michigan defensive lineman Rashan Gary or Kentucky linebacker Josh Allen.

Even if those guys are off the board there’ll still likely be a variety of cornerbacks available (for example, LSU’s Greedy Williams), receivers in the calibre of Oklahoma’s Marquise Brown, or offensive linemen like Ole Miss’ Greg Little, Alabama’s Jonah Williams or Florida’s Jawaan Taylor.

There is absolutely no need for the Cardinals to either force themselves in to taking Murray or reaching for Bosa. They can hold on to Rosen and build around him with a king’s ransom of picks.

If Keim really is a capable GM, this is the move he’ll be making. Compile assets, show faith in a young QB and a new head coach, and don’t waste a franchise-changing opportunity.

Unfortunately, there’s no indication that Keim is in fact a capable GM.

If you follow college football in passing, chances are you’ll know how good Kyler Murray could be in the National Football League. Despite some ‘interesting’ op-ed pieces recently about the possibility that he could fall outside the top 10 if Arizona pass at pick 1, Murray is a flat-out star and will be an instant success wherever he goes.

The simple fact that Keim hired Kingsbury in the offseason is a pretty fair indication that the Cardinals have the hots for the diminutive QB.

Kingsbury has been effusive (to say the least) in his praise of Murray whilst at Texas Tech. Just last year he was quoted as saying “… he [Murray] is a freak. He’s phenomenal. I’d take him with the first pick in the draft if I could.”

Even recently, Arizona’s new head coach described Murray as “…one of the better dual threat players to ever play.”

Kingsbury’s “Air-Raid” offense at Texas Tech is perfectly suited to the run-and-gun style that Murray would bring to the NFL, and it’s easy to see a seamless transition from the offense Kingsbury developed for Mahomes at Texas Tech to an NFL offense designed around Murray.

Whilst not bringing much in the way of sustained college win/loss success, Kingsbury is renowned as a “quarterback-whisperer (in the vein of Rams’ coach Sean McVay). He’s got a track record of identifying and developing QB’s in the style of Murray, and it remains unclear how he’d go with a more traditional-style QB like Rosen.

With that in mind, it’s worth assessing how much Rosen would pull on the open trade market. Most indicators show it’s likely to be not much more than a second-round pick given Rosen’s well-below par 66.7 passer-rating this season, and any trade would also carry with it the aforementioned dead money cap-hit.

Whether or not the Cardinals pick Murray will depend on their assessment of his value as compared to the loss they’d cop by getting rid of Rosen.

In our humble opinion, as good as Murray is, there’s no point cutting the cord on Rosen without seeing what he can be like with a decent supporting cast.

That said, it’s impossible that Keim would have hired Kingsbury without knowing his well-documented feelings towards Murray. This is exactly the type of move an erratic GM with a newbie head coach is likely to make.

3. Pick anyone but Murray, hedge bets on Rosen 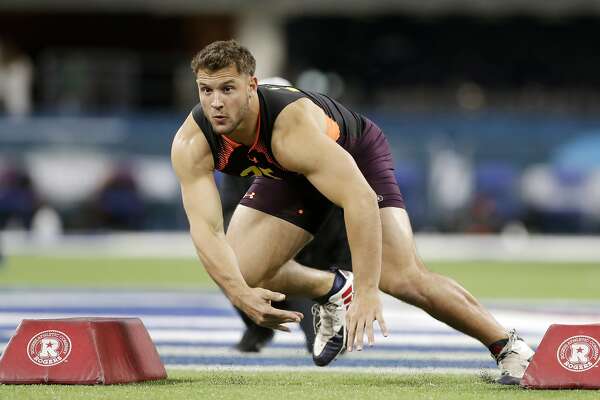 As Cleveland did in 2017 by spurning Mitch Trubisky, Patrick Mahomes and Deshaun Watson at pick 1 and taking Myles Garrett, there’s every chance the Cardinals pass on a highly-favoured QB for an NFL-ready defensive player.

Nick Bosa (pictured) is the clear standout in this non-Murray regard. An edge pass rusher seems to be on the wish list for almost every team in the draft, and the Ohio State product is far and away the best option available at the position.

Bosa is the kind of guy who could step in to a team like the Cardinals and have an impact straight away. In the pass-heavy NFC West there is every chance he could become a double-digit sack compiler within the first couple of years of his career.

The potential pairing of Bosa with the Cardinals’ other star on defense, Chandler Jones, is one which could cause Russell Wilson, Jimmy Garroppolo and Jared Goff to wake up at night in cold sweats.

Alabama defensive tackle Quinnen Williams is probably the only other legitimate pick 1 prospect, and he is similarly polished enough to make an immediate influence at the next level.

It would not be a shocking call if the Cardinals took either of those guys with the top pick.

However, as mentioned above, there is always the desire with pick 1 to get the best player on offer. If Keim doesn’t think that Bosa or Williams is the best player in the draft, it’s tough to see to see Arizona spending the top pick to get them.

Ignoring Murray to take a defensive player would be an enormous vote of confidence in the ability of Rosen and Kingsbury to work together (McVay and Goff style) to get the most out of each other and the team. Kingsbury has the QB pedigree, but hasn’t worked with a player of Rosen’s more conventional style. Can he unlock Rosen’s undoubted potential?

Picking either Bosa or Williams would show some much-needed faith in Josh Rosen, and allow the young star to develop in the NFL.

That said, there’s almost zero chance of this happening. Kingsbury likes Murray, Keim likes Rosen. There are really only two options on the table for the Cardinals; pick Murray or trade the pick.

So, what do they do?

If we were betting men (which we are), the smart money would be on the Cardinals taking Murray with the top pick.

He just might be that generational talent that every franchise is after, and, for the Arizona front-office, the thought of missing out on someone like that would be a lot more galling than the outside chance of a bust.

Whether Arizona should draft Murray is another issue entirely, and probably only something that can be properly assessed 5-10 years down the track.

The pressure is on. The NFL Draft is less than 48 hours away. Anything can happen.