The regular season is over which means the only individual award left to play for is the Super Bowl MVP. We have ranked the 10 best players still in the postseason and their chances of winning the prestigious award. 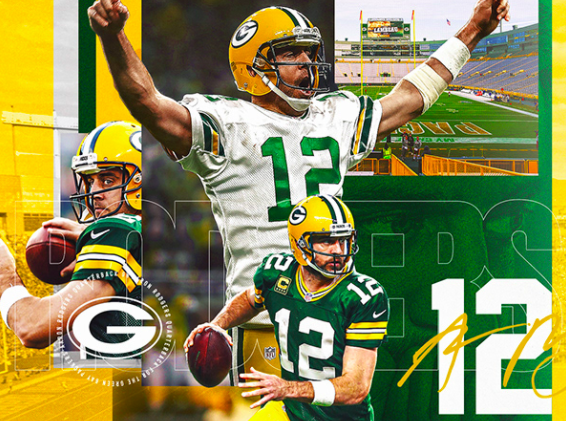 The NFL postseason is finally upon us and we now turn our attention to the Super Bowl MVP Power Rankings. Just 14 teams remain and we have selected 10 players from the postseason rosters that have the best chance of winning the award.

Aaron Rodgers ended the season on top of our regular season MVP power rankings and he is on top here again, but we have four new players who weren’t on the week 17 rankings, including two defensive players!

Aaron Rodgers will enter the playoffs as runaway favorite for the MVP award, and he will get a week off before not having to leave Lambeau Field until the Super Bowl. He finished the season with 48 passing touchdowns, eight more than second place, and only threw five interceptions, the least of all players to play at least 50% of games.

The big thing for Rodgers and the Green Bay Packers was securing the #1 seed in the NFC, which they still hadn’t done until Sunday afternoon. A win was all the Packers needed but Green Bay demolished their biggest rivals in the Chicago Bears, 36-16.

Rodgers is clearly the best player heading into the postseason and will stay that way for the next two weeks.

Josh Allen has been playing exceptionally lately, highlighted in a 56-26 win over the Miami Dolphins on Sunday.

The Bills’ QB ended up throwing 18/25 for 224 yards, three touchdowns and one interception and he didn’t play a single snap in the second half with the Bills leading 28-6 at the main break.

Leading the Bills to six straight wins, nine of their last 10, the AFC East crown for the first time in 25 years and the second seed in the AFC, Allen had one of the biggest improvements in performance in recent history. He finished fifth in passing touchdowns, fifth in passing yards and fourth in completion percentage for the season.

Allen and the Bills face an extremely tough test in the Indianapolis Colts this Saturday afternoon, but his play over the second half of the season warrants his position so high in the rankings.

The Kansas City Chiefs had locked up top place in the AFC so Mahomes and a bunch of other starters sat out a week 17 loss to the Chargers.

Mahomes ended the season second in passing yards and fourth in passing touchdowns, but was the only player in the top five of both categories to miss a game.

The one knock on the Chiefs was that over the last eight weeks they didn’t win a game by more than six points, but Mahomes led the Chiefs to a 10-game winning streak while the Chiefs averaged the most total yards per game in the league.

It will be interesting to see how Mahomes goes in the divisional round given he will have had two weeks off and will be coming up against the Titans or the Ravens. However, he has had an exceptional season and is the Super Bowl MVP favorite, while the Kansas City Chiefs are favorites to repeat as champs.

Derrick Henry is the clear best and most valuable player in the league that isn’t a quarterback.

On Sunday, Henry became just the eighth player in league history to rush for 2,000 yards in a season and he did so in very impressive fashion. The Texans’ defense had no answer for the King, who exploded for 250 yards and two touchdowns.

Henry ended up with 470 more rushing yards than the next closest player and always rushed for 98 first downs, the most in the league. His impact is more than the numbers, with Henry opening up play action for Ryan Tannehill who had an exceptional season himself.

Many believe that Henry could in fact be named co-MVP with Rodgers due to his 2,000+ yard season, and while that may not be the case, he will be the determining factor in how far the Titans can go in the postseason.

Henry’s opponent this Sunday afternoon, Lamar Jackson of the Baltimore Ravens, comes in at number five on the Super Bowl MVP power rankings.

After winning last year’s MVP, Jackson started the season off leaving many to think that he was a one year wonder. However, after testing positive for COVID-19 and missing week 12 because of it, Jackson returned as good as ever to lead Baltimore on a five game winning streak and back into the postseason.

Over the streak, Baltimore scored an average of 37.2 points with a high of 47 and low of 27 while winning by an average 19.4! Their 37.2 points per game was the second highest average over that stretch and they had the best third down percentage in the league.

The versatility that Jackson has shown whether it be on the ground or with his improved passing game, Baltimore will only be able to go as far as he takes them, but the form he is in at the moment is very positive for the Ravens.

The first defensive player in the MVP Power Rankings for the entire season and T.J. Watt is very deserving to be here. After a two sack performance over the Indianapolis Colts in a week 16 win, Watt jumped into favoritism for Defensive Player of the Year and still is despite sitting out week 17 to rest for this weekend.

Watt averaged a sack a game for a total of 15 sacks for the season, 1.5 more than the next best player. But that wasn’t all he did as Watt defended the most passes out of the entire top 50 for sacks across the league and had an interception, showing his athleticism and versatility.

T.J. Watt is the leader of the Steelers defense that helped Pittsburgh get off to an 11-0 start and finished the season third in total yards allowed and third in points per game allowed.

Baker Mayfield, Watt’s opposing quarterback on Sunday night, has the second worst drop in performance when put under pressure so Watt will be leading the charge in hope of giving Big Ben good field position and helping the Steelers advance.

Tom Brady continues to turn back time in Tampa Bay, helping the Bucs get the fifth seed in the NFC setting up a matchup with Washington, the team with the worst record to qualify for the postseason, on Saturday night.

The Bucs enter the postseason on a four game winning streak and TB12 is the main driving force behind it. Over the streak Tampa Bay have scored an average of 37 points and had an average winning margin of 18.25. Brady averaged 333 passing yards per game whilst throwing 12 touchdown passes and just one pick.

There are still some questions given that the Bucs are 1-5 against teams that qualified for the playoffs and of their five losses, four are in the NFC. However, the three teams that handed them those four losses are on the other side of the bracket meaning Brady and the Bucs wouldn’t have to face them until a potential NFC Championship game.

Brady has the most playoff experience of any player remaining and has found form at the exact right time heading into the wildcard round.

The second defensive player to make the list and Aaron Donald is certainly one of the 10 best players to make it to the postseason.

Donald has taken the place of the quarterback he will be going up against on Saturday afternoon in Russell Wilson, who has had an average three week stretch leading into this matchup.

When the sides met in week 16, Donald had one sack, two tackles and a quarterback hit, while Wilson threw just one touchdown with a completion percentage of 62.5%, his third lowest of the season.

Donald had 13.5 sacks for the season which is good enough for equal-second in the league, while also having 20 tackles for loss, also equal-second. His individual play often attracted double and triple teams which allowed his teammates and the entire defensive system to thrive.

The Rams were the only team to allow less than 300 total yards per game and also allowed the fewest points per game, with Donald being the driving force behind that. He will have to be at his best for the Rams to be able to overcome their NFC West rivals this weekend, but he is definitely up to the task.

Mr Reliable comes in at number nine. Drew Brees is a safe, reliable and experienced quarterback who is the leader of the best roster in football.

Brees missed four games with broken ribs and a punctured lung, but still managed to help the Saints win the NFC East, while becoming the first team in the division’s history to sweep all six divisional games.

Throwing 24 touchdowns and just six interceptions in his 12 games, Brees kept the Saints ticking along and winning games that they needed to. When he played, the Saints lowest score for the entire season was 24 points, and in seven of the 12 games he played they scored 30+.

Brees had the second highest completion percentage of all quarterbacks with 70.5% and now faces a side that he beat in week 8 this season. The Saints beat the Bears by three points in Chicago and now get to play them in the Mercedes-Benz Superdome. Brees had 280 yards at 75.6% with two touchdowns and no picks in the game in the win and will be looking for a similar game in this one.

This was a tough one to pick, with Stefon Diggs and Travis Kelce getting heavy consideration here but Davante Adams has had an exceptional season for the Packers.

Adams played one less game than Kelce but had seven more touchdowns and two less games than Diggs but had ten more touchdowns. While Diggs and Kelce were one and two in total receiving yards, Adams actually averaged more per game.

With potentially the best footwork and route running, Adams was a dependable target all season long for the MVP favorite, Aaron Rodgers. This was exemplified in week 16 with a 142 yard, three touchdown performance in the snow against AFC South winner, Tennessee.

Adams had an eight game streak with at least one receiving touchdown, the longest streak of the season, and had just two drops from 149 targets all season.

*Odds correct at time of writing, courtesy of DraftKings.