Now that the Wild Card Round is behind us only eight teams remain in the 2020/21 NFL season. Our NFL Power Rankings have sorted out the remaining teams, with the 2021 Super Bowl favourites returning to the number one ranking... 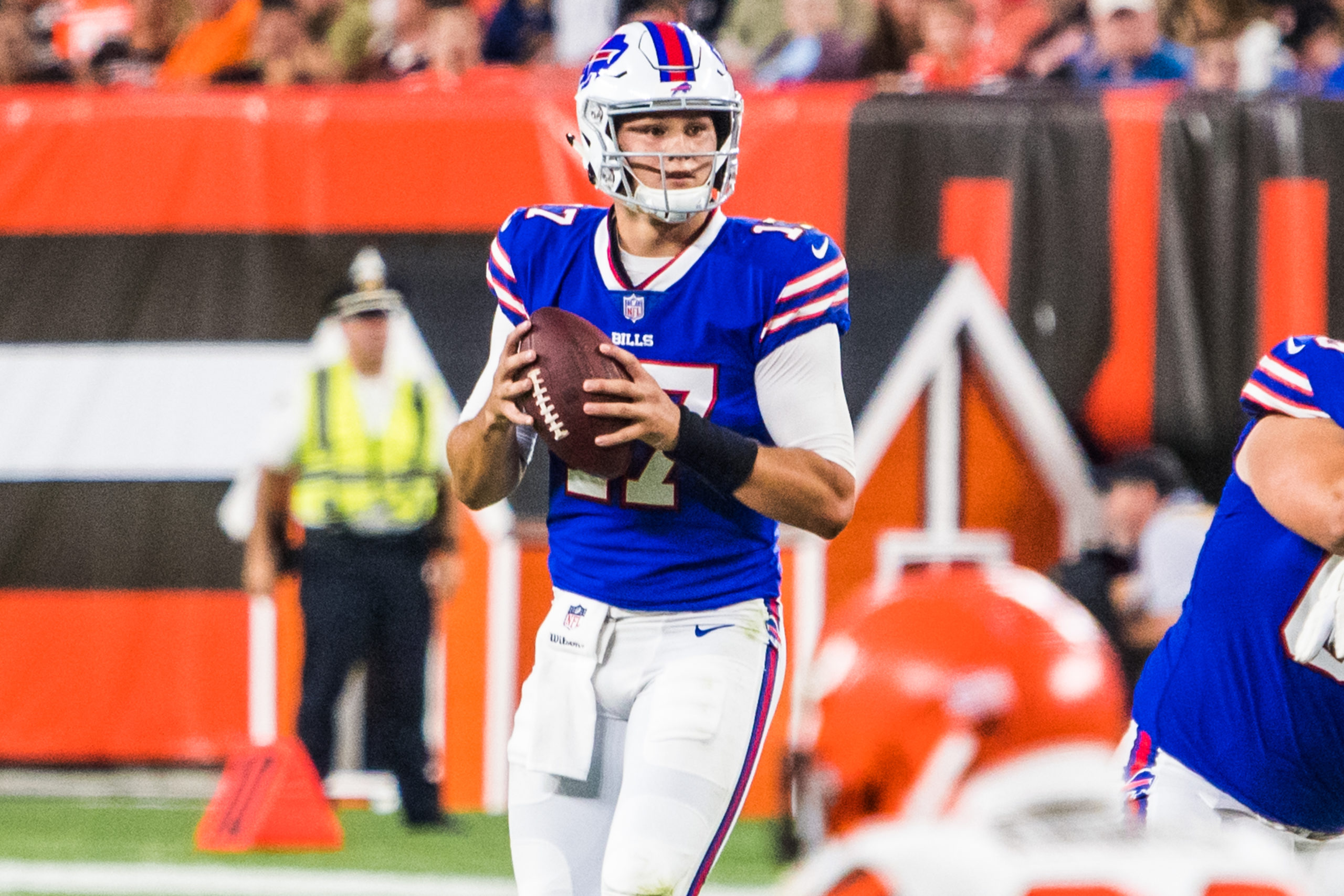 In an action packed Wild Card Weekend, Cleveland and Buffalo captured their first playoff victories in more than 25 years, Lamar came from behind to secure the first playoff victory of his career, Tom Brady continued to be Tom Brady and 14 teams became eight as the Chiefs and Packers prepare to re-enter the playoff picture for the upcoming Divisional Round.

Here’s where the remaining eight NFL teams stand ahead of the Divisional Round of the 2021 NFL playoffs:

After clinching the No. 1 seed in the AFC with their Week 16 victory over Atlanta, the Kansas City Chiefs had the luxury of resting their starters for the final regular season game of the 2020/21 season.

With that in mind Patrick Mahomes and his All-Pro offensive weapons have had two weeks off to prepare for their run at claiming a second consecutive Super Bowl.

As well as their refreshed roster, Andy Reid boasts a 5-2 record in the NFL Playoffs when coming off a first-round bye, and will be looking to improve that record to 6-2 when they face off against the Browns on Sunday.

As the only 13-3 team in the NFC, the Packers also enjoyed a first-round bye in Week 1 of the 2021 NFL playoffs. Despite not playing, results fell in Green Bay’s favour on Wild Card Weekend, avoiding a Divisional Round matchup against Tom Brady and the Tampa Bay Buccaneers, who defeated them 38-10 in the regular season.

The Packers will face off against a battered and bruised Los Angeles Rams outfit for next Saturday’s Divisional Round matchup. Given that Rams quarterback Jared Goff is just a few weeks removed from a broken thumb and defensive tackle Aaron Donald tore rib cartilage during the game against Seattle, the Packers should feel confident going into this game, possessing a huge advantage at quarterback especially with Los Angeles’ best defensive weapon competing at less than 100%.

Coming into the postseason as the in form team of the NFL, Buffalo recorded their first playoff victory since 1995 with a 27-24 win over the Indianapolis Colts on Wild Card Weekend. Though the Bills have been in hot form, Indianapolis dominated possession and total plays against Buffalo on Saturday.

The Bills defense couldn’t get Phillip Rivers off the field, allowing the Colts to put up 24 points and 472 total yards while also allowing nine 3rd down completions, giving some cause for concern.

However, in a performance that vindicated the Bills Wild Card Weekend playoff exit last year, Josh Allen threw for 324 yards and two touchdowns while also rushing for 54 yards and a touchdown on the ground, to lead the Bills to the victory. Buffalo will face an inform Ravens outfit in the Divisional Round next weekend, setting up a mouth-watering Josh Allen vs Lamar Jackson matchup.

There’s only one player in @NFL history to ever throw for 300+ yards, tally a 70+ completion percentage and rush for 50+ yards in a playoff game…

In what was arguably their best defensive performance of the season, the New Orleans Saints got their 2021 postseason campaign off to a strong start with a 21-9 victory over the Chicago Bears on Wild Card Weekend. The Saints defense allowed franchise playoff lows of nine points, 11 first downs and just 239 total yards of Bears offense in their matchup on Sunday.

With the scores sitting at just 7-3 in favour of New Orleans at half time, Drew Brees looked to pick up the pace of the game in the second half, finishing with 265 yards and two touchdowns.

Another plus for the Saints is that Alvin Kamara and Michael Thomas looked to finally both be healthy, combining for 189 total yards and two touchdowns on Sunday. A third matchup against Tom Brady and the Bucs awaits New Orleans in the Divisional Round with the Saints currently up 2-0 on Tampa Bay this season.

Coming up against the only team in the 2021 playoffs that had a losing record, the Buccaneers recorded their first playoff victory since 2003, defeating the Washington Football Team 31-23. With Washington possessing one of the most ruthless defenses in the NFL, the pressure was well and truly on 43 year old quarterback Tom Brady.

And, as he has done so often under pressure, Brady delivered. In what was his 31st career playoff win, Brady threw for 381 yards and two touchdowns against the brutal Washington pass rush, finding Mike Evans for 119 yards in the air.

However, it is hard to justify the 7-9 Washington Football Team as a serious playoff opponent, making next weekends Divisional Round matchup against the 12-4 Saints a much bigger test. Brady threw 12 interceptions in the 2020/21 regular season, five of which were in his two losses against the Saints.

No other QB earned a 80+ grade against Washington this season. pic.twitter.com/gwz4YLzU95

Down 10-0 against the Tennessee Titans in the first half, Lamar Jackson recorded his first win as a starting quarterback on Wild Card Weekend, with the Ravens defeating the Titans 20-13. Jackson completed 17/24 passes for 179 yards and an interception against the Titans.

However, it was Lamar’s 136 yards and a touchdown on the ground that proved to be the difference. As good as the Ravens 20 point, 401 total yard performance was on offense, Baltimore’s defense was the deciding factor of the game, holding Tennessee to just 209 yards and restricting the 2020/21 rushing leader Derrick Henry to just 40 yards on 18 attempts.

After putting up 236 rushing yards and two touchdowns against the Titans, Baltimore will be confident going into their Divisional Round matchup against Buffalo, given that the Bills have allowed the sixth-most rushing touchdowns this season.

Baker Mayfield threw for 263 yards and three touchdowns in his playoff debut, while the duo of Nick Chubb and Kareem Hunt accumulated 124 rushing yards combined, with Hunt scoring two touchdowns.

Coming up against their division rivals and winners of the AFC North without their head coach and multiple players (who were forced out of the game due to a COVID-19 outbreak), Cleveland captured a franchise defining playoff victory on Sunday as six point underdogs.

However, given the emotional toll that the victory will have had on the team, franchise and city of Cleveland, the Browns first playoff campaign since 2002 will be ended when they face the well rested Kansas City Chiefs at Arrowhead next weekend.

The @Browns have won a playoff game!! pic.twitter.com/YB6WWcxf8b

The Rams put on a defensive masterclass against the Seahawks on Saturday, advancing to the Divisional Round with a 30-20 victory. Aaron Donald (2.0 Sacks) and Jalen Ramsey headlined a defense that allowed only 20 Seahawks points and 278 total yards while also sacking Russell Wilson on five occasions and forcing two Seattle turnovers.

Even though they are both expected to play Aaron Donald (ribs) and wide receiver Cooper Kupp (knee) will both likely be limited physically against the Packers next weekend. As well as that, quarterback Jared Goff is still recovering from a broken thumb and backup quarterback John Wolford is still recovering from a hard hit that forced him out of the game against Seattle.

To beat the Packers at Lambeau Field, running back Cam Akers will have to have another big game (131 yards and 1 TD vs Seattle) and the Rams defense will need to put Aaron Rodgers under immense pressure.