There is a new player leading the SportsTips' NFL MVP Power Rankings, check it out. 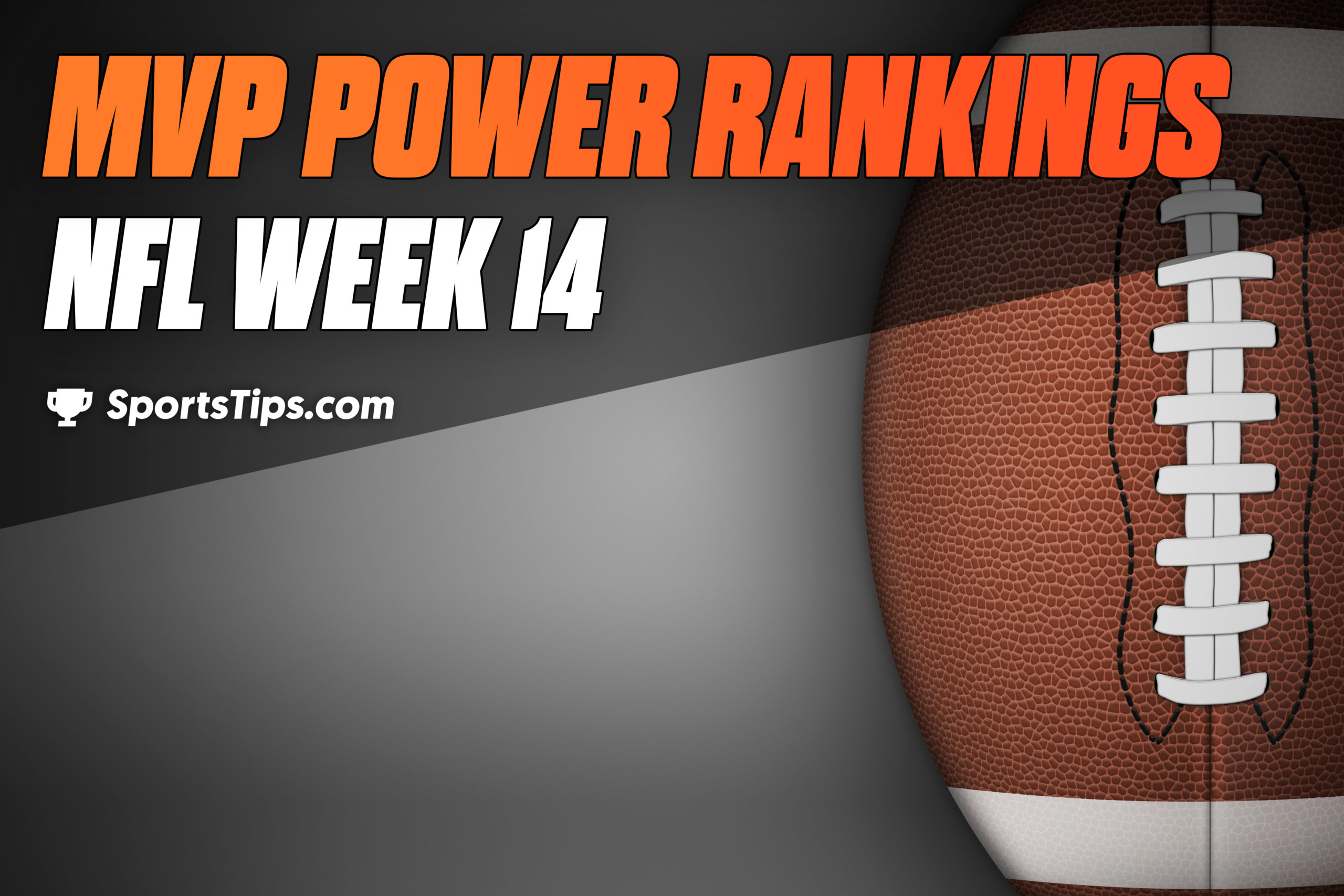 Week 13 of the NFL saw the only undefeated finally get their first defeat, while in the SportsTips’ NFL MVP Power Rankings a new player a the top, while there have also been some big movers.

For the first time, we have a new number one player in the SportsTips’ NFL MVP Power Rankings, as the Buffalo Bills quarterback knocked off frontrunner Patrick Mahomes.

Allen produced one of his best games in the Buffalo Bills 34-24 win over the San Francisco 49ers. Despite an invisible first quarter where he was hardly seen, he finally came to life in the second often just stringing passes together to get the feel.

Once he got the feel for it, Allen was instrumental in his side’s 10 point win, as he got his first touchdown pass with three minutes to go in the second quarter. From there it just seemed that every pass Allen threw turned into gold as his vision for a pass was excellent in the win (sometimes he often danced around opponents to get the pass away).

Allen threw three more touchdowns after that, as he finished with four for the game, had a completion percentage of 80.0% as he completed 32 passes from 40 attempts and threw 375 yards to earn himself a passer rating of 139.1.

It was a classic quarterback display as Aaron Rodgers once again proved why he is in the running for the MVP as he helped his Green Bay Packers defeat the Philadelphia Eagles 30-16.

Rodgers made things look so easy for himself in the 14 point win, as he created plenty of time to get the pass away and to assess his options, and pretty much every pass that he threw turned into gold as he had a stellar impact in the sides win.

Rogers ended up throwing 295 yards, a completion percentage of 73.5% (his best since week 8) as he completed 25 passes from 34 attempts as well as throwing three touchdown passes.

Rodgers is the fastest (193 games) to 400 in NFL history! #GoPackGo pic.twitter.com/lCrexThz8j

After missing out on Baltimore’s clash with the Pittsburgh Steelers due to contracting COVID-19 (where he had to self isolate for 10 days given the NFL protocols) Jackson returned to the field against the Dallas Cowboys.

Jackson was back to his best during the Baltimore Ravens 34-17 win over the Dallas Cowboys, as he seemed to have his confidence back. It was an all-around solid performance by the former MVP winner, as his first impact set the tone for himself in the 17 point win and he began rushing a few yards when he first had the football.

While most of the time he opted for the handoff during the set plays, he would also create time and space for himself which brought out his other strength, his vision as he often chose to rush a few yards rather than passing the ball. This was evident when he gained a rushing touchdown to his name to score the first touchdown in the game just before quarter time.

His passing game was also strong, often finding targets as he finished the game with a completed percentage of 70.6 % where he completed 11 passes from 17 attempts, amassing 107 yards and even producing two touchdown passes.

After a quiet first quarter, Cook started to make an impact in the second quarter as he started to rush a few yards to his name and from there he was hard to stop.

He made a spectacular showing causing headaches among the Jacksonville Jaguars defense as he ran around some defenders only to be stopped short a few inches from the touchdown line.

He also helped his team get a touchdown when he produced a great block in the third quarter, while also showcasing his speed again as he proved hard to beat and also hard to bring down. He finished the game with 120 yards in the Vikings’ 27-24 overtime win over the Jaguars.

While Murray started the game well with a touchdown pass to his name, it wasn’t an overly impressive performance as he threw a few incomplete passes and got sacked twice. However, he still managed to show a glimpse of what he can do, often showcasing his well known long passes.

He did manage to get the Cardinals into gear when they were trailing the Los Angeles Rams by 10 points in the third quarter when he opened his eyes and started creating the momentum which in turn handed him his second touchdown pass (he ended up with three on the night) as they cut the deficit to three points.

Ultimately though Cardinals lost to the Chargers 38-28.

It wasn’t the best game for the MVP favorite, nor was it the worst he has played but given his performance and as other players continue to rise it has meant that Mahomes for the first time has given up the number one spot in the SportsTips’ NFL MVP Power Rankings.

The Chiefs for the large part faced a fight on their hands as they trailed by one point heading into the second quarter, but in the end, they overcame a strong Denver Broncos side 16-22.

While Mahomes only finished with one touchdown pass to his name in the six-point win, he did show enough flair to generate some excitement as he tried to make things happen such as his long passes and sometimes showing us his running game as well as creating enough time and space.

Mahomes finished the game with a completion percentage of 62.5%, as he completed 25 passes from 40 attempts and threw 318 yards.

The Steelers’ undefeated run came to an abrupt end when the Washington Football Team defeated them 23-17 on Tuesday.  The game got off to a slow start from both sides as the first quarter ended 0-0, however, it wasn’t the best display by Roethlisberger in the six-point defeat.

Roethlisberger did manage to still get two touchdown passes to his name though, and at times looked like he could spark the Steelers as he occasionally found enough time and space to throw the football and often had an eye for the quick pass too.

However, he also threw too many incomplete passes in the defeat and also threw one interception, which was evident as he finished with a 62.3% passer completion percentage as he completed 33 passes from 53 attempts. Overall it wasn’t his best game, but it certainly wasn’t his worst game.

It wasn’t Wilson’s best performance but then again it wasn’t entirely his worst of the season, he was just a little inconsistent in his side’s 17-12 defeat to the New York Giants.

For starters, he did have good vision early on, often hitting complete passes and linked up well with DK Metcalf. He also often caught the Giants defense off-guard when he faked a short pass as well as getting his passes off quickly. His hard work soon got rewarded when he got a touchdown pass in the fourth quarter.

The other good part of Wilson’s game was that he generated some good yardage with his throws especially when they were in the defensive end of the field in the second quarter, as Wilson finished the game with 263 yards.

However, Wilson threw too many incomplete passes, but what was more worrying was that when he decided to take the game on he often got sacked and sometimes he overthrew many passes.

Brady’s Tampa Bay Buccaneers had the bye, but it hasn’t been smooth sailing for him and his side, as he has been a bit inconsistent throughout this season showcasing one good game then backing it up with a poor one as the process has often repeated itself.

Brady though has still thrown 28 touchdowns (ranked fourth in the NFL) and has also thrown a total of 3,300 (ninth in the NFL) while going at a completion percentage of 64.8 %.

Henry didn’t have a stellar performance as he didn’t have much of an impact on the game. In his first chance to stamp his authority he lost the football.

The Browns defense especially in the first half nullified Henry’s impact, but the Titans made a charge in the second half and Henry nearly found himself with a touchdown only to be stopped short.

He somewhat came to life in the third quarter as he finally began rushing a few yards after he was quiet for most of the game but it still couldn’t impact the scoreboard nor help the Titans as he finished the game with 60 rushing yards.