Week 3 of the 2019 NFL season is just about in the books! After each round of the season, Sportstips.com will be bringing you our three biggest winners and losers for the weekend. Feedback? Let us know on Instagram here, Facebook here or Twitter here.

We really tried to think of someone else to put in our primary winner’s position for this week, but it just wasn’t possible. There was only one supreme champion of Week 3 and his name was Daniel Stephen Jones III.

Generally – and just about without exception by our count – quarterbacks taken anywhere near the 6th pick in the NFL draft come in to their big-league starting debuts with the weight of the world’s expectation on their shoulders. To say simply that this was not the case with Jones would be to misstate the situation entirely; in fact, the entire world believed the 22-year-old Duke product was about to flame out like an NFL version of Anthony Bennett.

Derided by all – most particularly the fans of the very team he was drafted by – the prevailing theory from statisticians, draft analysts, armchair supporters and Big Blue fanatics alike was that Jones would prove to be the crowning disaster of a franchise in the midst of an unrelenting series of them.

Instead, he did this:

Daniel Jones scrambles for the TD on 4th down to give the Giants the lead!!!#NYGvsTB 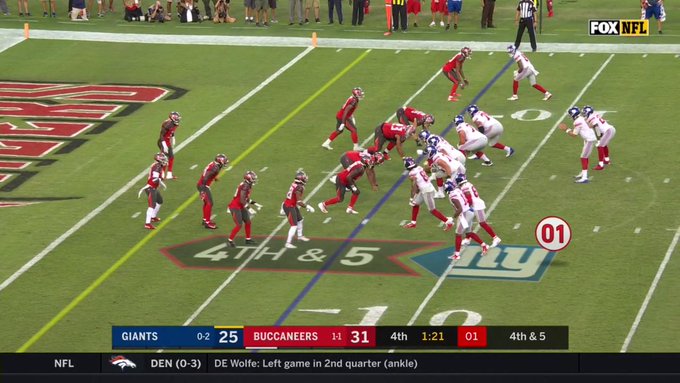 By leading the Giants back from 18-points down, and tossing 336 yards and two touchdowns as well as adding two more on the ground in the process, Jones made a mockery of draft analytics. He also made a mockery of a few NFL records just to top the day off.

During the Giants’ 32-31 win at Tampa Bay, Daniel Jones became the first NFL rookie QB with at least 300 passing yards, two passing touchdowns and two rushing touchdowns in a single game since 1970.

The answer to the bizarre question of how we all got it so wrong on draft day may just lie in some of the stuff that matters away from the gridiron; the “intangibles”, as the old-timers like to call it. Watching Jones play it was all-too evident how badly he wanted to win the game, and his passion was clearly infectious.

There was a point in the second quarter Daniel Jones went into the huddle and said, “Let’s fu***** score!” Guys were taken aback. Had never seen that side of him, seen him curse. Moments later he pulled a zone read and ran in a touchdown. Had the sideline buzzing. #Giants

Move over, Eli. There’s a new sheriff in town.

Amazing but true: Daniel Jones now has an 18-point comeback on his resume. Eli Manning has never had a win in his career in a game the Giants trailed by 18 points, per ESPN Stats and Information. His largest comeback win was a 17-pt comeback in Week 2, 2006 at Eagles.

On paper that may be true, but not only did the Patriots fail to cover the line for the first time this season, they also conceded their first two touchdowns of the year. To the New York Jets. The same Jets currently trotting out their third-string practice squad QB in NFL games with a straight face.

Falk lobbed one up straight to D-Mac!

Ha. It’s kind of beyond a laughing matter at this stage. Which is why it’s so gosh-darn embarrassing that the Patriots only managed to win by a paltry two scores against a team which so far this season has managed just 590 offensive yards. In three games. Read that number again.

Even worse, with the Pats up by 23-points and the line comfortably covered, rookie Jarrett Stidham entered the game in place of the effervescent Tom Brady. Stidham – supposedly the future of the franchise – completed two passes, a third to the opposition and finished the game with 14 yards and a +/- of -6 in about one minute of game play.

Prez to the house.#NYJvsNE | #TakeFlight 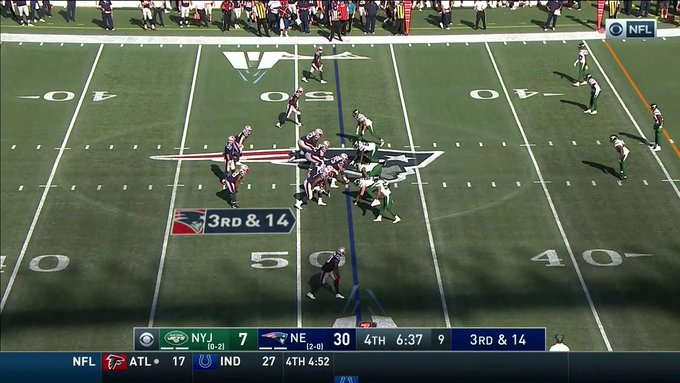 Tom Brady may have to play on until his early 50’s at this rate.

Winner: Fans at AFC playoff games for the next 10 years

There was a time when we were worried about the future of the quarterback position faced with the impending possibility of Brady, the Mannings, Ben Roethlisberger and Drew Brees slowly bowing out of the league.

If there’s one thing we’ve learnt definitively over the first three weeks of the 2019 season, it’s that NFL quarterbacks post-Brady are going to be juuuust fine.

The Patrick Mahomes v Lamar Jackson matchup was hyped throughout the week, and boy did it live up to expectations. Mahomes had another lazy – and I mean lazy – 374 yards and 3 TDs through the air, while at the other end of the field Jackson wasn’t bad either. 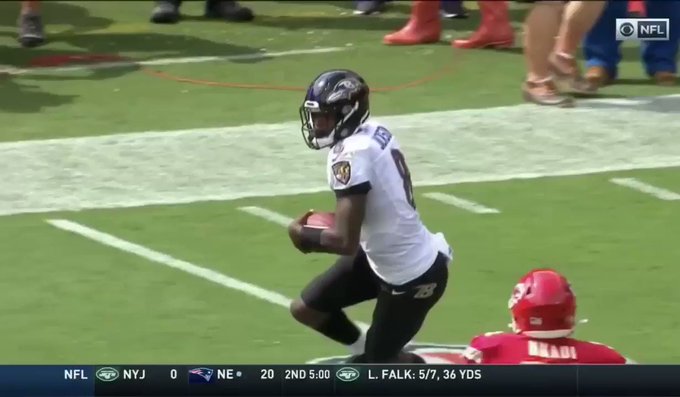 The Ravens’ QB finished with 267 yards passing plus 46 yards on the ground and a massive late-game TD which gave Baltimore a sniff of victory. 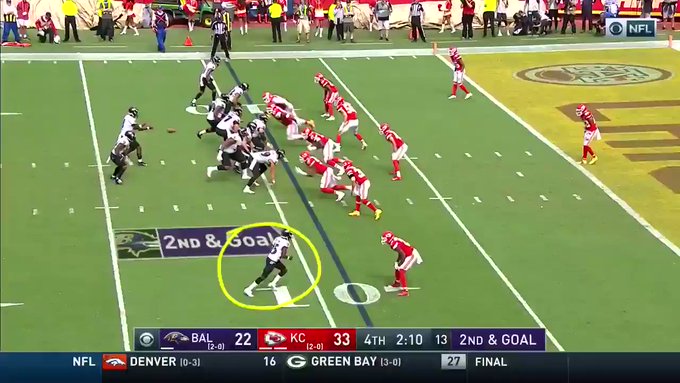 Meanwhile, their contemporary Deshaun Watson missed just 9 passes while throwing for 351 yards and 3 TDs against the fancied Chargers. 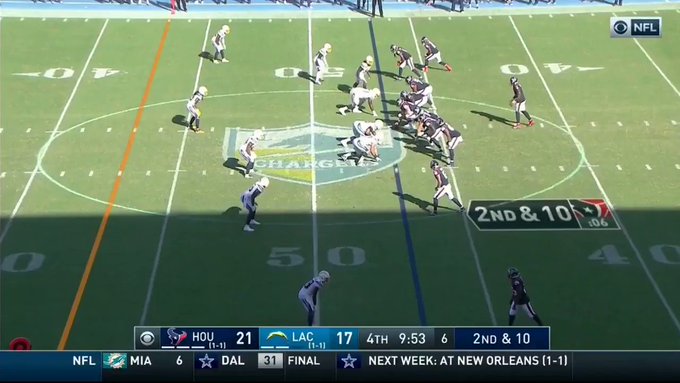 It is going to be an absolute treat watching these three scramble around and throw darts in big games for the next decade.

The Cleveland Browns – the same Cleveland Browns that were touted as a Super Bowl threat in the preseason – are now 1-2, with their one win coming against the diabolical Jets and probably an outside chance at best of making the playoffs.

While some of their issues no doubt stem from their big players perhaps getting a little ahead of themselves – franchise QB Baker Mayfield appears to have regressed significantly, for examples – there’s no doubt that head coach Freddie Kitchens needs to take a large amount of the blame.

This right here is one of the most baffling play-calls in NFL history.

this was Freddie Kitchens’ 4th-and-9 play.

it was not very good 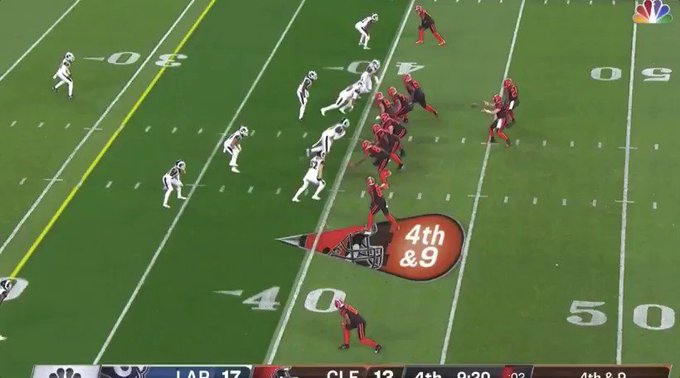 4th and 9 near midfield in a four point game, and Kitchens called a…. draw. Yikes. Needless to say, it didn’t work.

Looking through the @pfref play index and I don’t think I can find a fourth-and-8+ play where a team deliberately handed the ball to a running back before tonight since Bernie Parmalee in 1997.

On the Browns’ final, desperate drive – which resulted in a Mayfield interception in the endzone – Odell Beckham Jnr wasn’t targeted once. How – and I can’t stress this enough – the F**K can that be allowed to happen.

Not only was his play-calling abysmal, his game-management was also atrocious. With 33 seconds left and the Browns pressing for the game-tying TD, Kitchens burned a time-out in order to re-group and call the right play. On paper that all seems okay – coaches do it all the time – but it actually meant the Browns could no longer force the Rams to give them the ball back after Mayfield’s interception and/or turnover on downs.

LA simply knelt at the 20-yard line and the game was over.

Head coach Freddie Kitchens shoulders the blame for the Browns loss to the Rams. #LAvsCLE 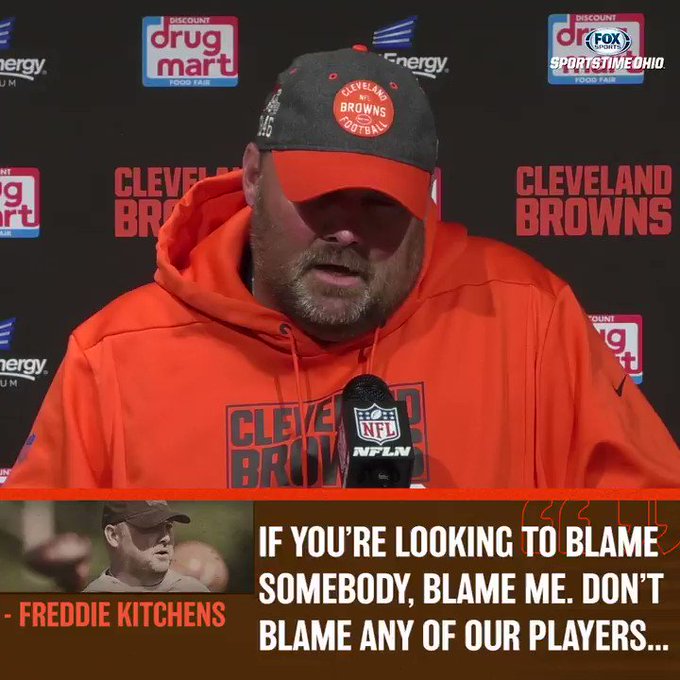 Oh, yes Freddie. We will.

With the Ravens, 49ers, Seahawks, and Patriots to come in the next month, it doesn’t get any easier for Cleveland.

We keep doubting Buffalo, and they keep proving us wrong.

Beating the Giants and Jets was one thing, but taking on a tough Bengals outfit and coming out on top was going to be something else entirely. No problem for Josh Allen and his Bills, though.

A strong running game built around the Frank Gore, Allen and T.J. Yeldon is anchoring an offense that is starting to look weirdly confident. How confident you ask? Well, so confident that they entrusted Allen to throw the ball 36 times on Sunday. And he did so with aplomb.

This would’ve been one of the most remarkable touchdowns of the season if it had been held on to in the end-zone.

How many QBs can pull off the stutter step…? #Bills 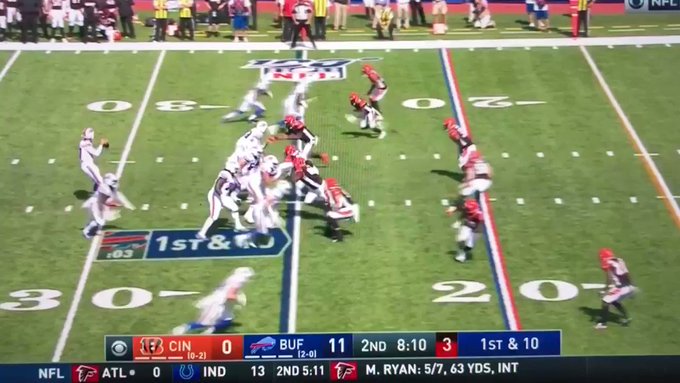 Buffalo are now 3-0 – yep, you read that correctly – and have the Patriots, Titans, Dolphins, Eagles, Redskins and Browns to come in the next six weeks.

Don’t look now… but they could conceivably be 8-1.

This weekend’s match-up with the Pats suddenly looks intriguing thanks to a defense which held the Red Rocket Andy Dalton to just 249 yards a TD and 2 INTs.

On Sunday Newton pulled off the rare feat of not playing, and still losing.

This week, eight of the NFL’s 32 starting quarterbacks were backups at the beginning of the preseason, and none – even our boy Danny Dimes – were better than Carolina’s second-stringer Kyle Allen.

Allen was outrageously impressive in his 261-yard, four-touchdown performance against the Cardinals. Sure, it was against the lowly Cardinals, but boy does it look like the Panthers have found something special with the undrafted Allen.

Which is very bad for the injured Cam Newton, who is yet to score a TD in his two games this season. In fact, in 125 games in nine seasons, Newton has had just six four-touchdown games like the one Allen had in just his second start as a pro.

Assuming Newton can get healthy again this season all this leaves the Panthers in quite the conundrum. Could we have seen the last of Newton in a Panthers jersey?

RR: Yes, Cam Newton is the starter, “but right now we’re going to depend on Kyle going forward.”