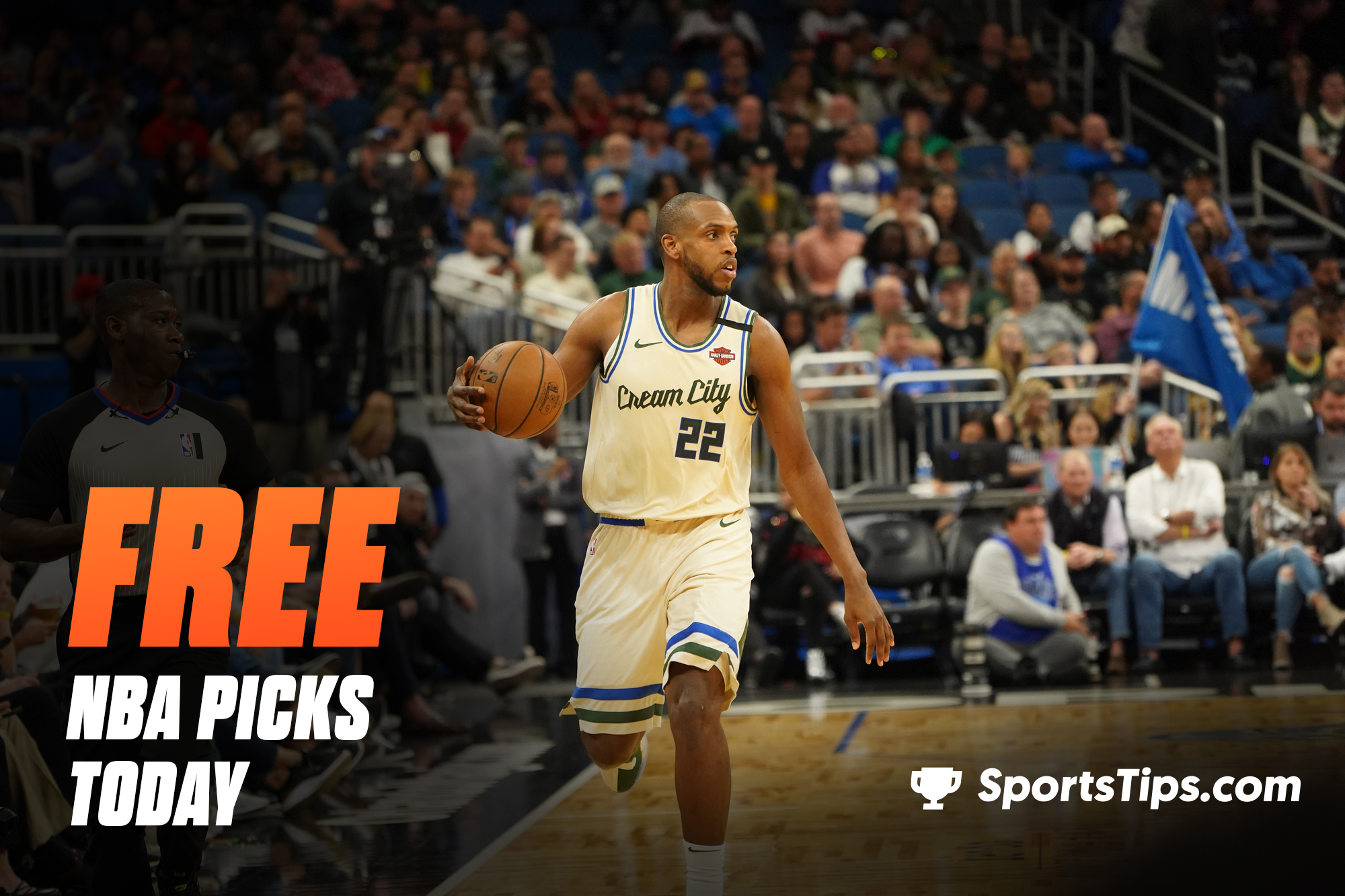 SportsTips’ FREE NBA picks are on fire once again! Last night we went 21-5-1 across all nine games and a blistering 8-1 in money line picks and 7-1-1 in spread picks!

We have just six games scheduled for tonight meaning we have another 18 bets for you to place. We keep picking winners so make sure you catch all our bets below so you don’t miss out!

The Dallas Mavericks have had a successful return to action, looking the goods when defeating both Memphis and Boston at home. They now get on the road to take on one of the best home teams in the competition, the Philadelphia 76ers. There is a bit extra in this one after the teams participated in a straight up trade during the offseason that saw Josh Richardson become a Mav while the Sixers gained Seth Curry.

While we picked it, that was a surprise travelling win for Philly who is just 8-9 on the road this season, compared to a very impressive 13-2 home record. That doesn’t bode well for the Mavs who, despite their good form, are just 7-7 on the road.

However, you can’t argue with good form. With Kristaps Porzingis out of the line up, Luka Doncic took over, having a game high 31 points and eight assists whilst tying the game high with 10 rebounds. Not only that, but with scores tied and just seconds remaining, Doncic hit the step back three with 0.1 left on the clock to give the Mavs the win.

While the Mavericks come in off the back of two impressive wins and Luka Doncic is playing at an MVP/All Star starter level, we like the Sixers in this one. Their home record is too good to ignore and Simmons is putting his name in the conversation for defensive player of the year. Philly has all the right pieces to shut down the Mavs and power over the top here.

A pretty straightforward pick here as the Brooklyn Nets should pick up their eighth straight win when they host the Orlando Magic tonight. Kevin Durant will be sidelined for the sixth straight game in this one but Brooklyn have been playing incredibly on both ends of the floor in his absence.

Tuesday night saw them pick up a 127-118 win over Sacramento, their fifth win of double figures over their seven game streak. James Harden had a 29 point, 14 assists, 11 rebound triple double but the game ball went to Bruce Brown. The 6’4 guard who plays like a forward and is Brooklyn’s energy provider and defensive stopper had a career high 29 points on 11/13 shooting.

Orlando had actually been playing some good basketball, picking up three straight wins including over the Warriors but Tuesday night’s 12 point home loss to the struggling Pistons was far from impressive. Nikola Vucevic, who surprisingly received an All Star reserve spot, put up a lacklustre, yet team high, 20 points along with nine rebounds, four assists and two blocks.

The Magic are just 5-10 on the road this season and they are now following up from a performance where they trailed by as much as 20, at home, to the Pistons. That isn’t a good lead up to get on the road and play the hottest team in basketball right now.

Two teams looking to atone for their Tuesday night performances sees the New York Knicks host the Sacramento Kings. New York just fell short of the Warriors, being unable to slow down Steph Curry, whilst the Kings couldn’t keep up with the red hot Nets. That loss dropped New York to 15-17 on the season but they still hold the sixth seed in the East.

Julius Randle got named to his very first All Star game and proved that he deserves to be on that stage, putting up an evenly spread statline of 25 points, 10 rebounds and seven assists. Elfrid Payton also enjoyed a nice scoring night with 20 points but RJ Barrett managed just four points on 1/9 shooting.

While the Knicks will need Barrett to contribute more than that, they will also be asking other role players to increase their output against a Sacramento side that just had six players score in double figures and has the 12th best offense in the league.

De’Aaron Fox wasn’t selected by coaches to be an All Star reserve despite a career year and he continued his good play in Brooklyn with 27 points and eight assists. The surprise packet was rookie Tyrese Halliburton who had a very impressive night, putting in 23 points, nine assists, five rebounds and three steals.

With that being said, the Knicks’ defense is still one of the best, being rated third and allowing the fewest points per game. The Kings on the other hand have the worst rated defense in the league, have now lost eight straight games and we don’t see that changing here.

The Los Angeles Clippers get on the road to take on the Memphis Grizzlies tonight in what is the first of a two game set between the sides. LA comes into this one on the back of a very impressive win over the streaking Wizards while Memphis have dropped two straight, both by double figures and an average over 20.

The Grizzlies have had two nights off to recuperate and prepare after their 92-102 loss in Dallas. Ja Morant led the team with 22 points, nine assists and two steals but his teammates couldn’t help him. Memphis shot just 39.4% from the field and 19.4% from deep with every player outside of Morant combining for just eight assists.

That sort of offensive output isn’t going to cut it against the Clippers, who boast the #1 offense in the league. LA has the best three point percentage, best free throw percentage, third best field goal percentage, scores the fourth most points per game and commits the fifth fewest turnovers.

Kawhi Leonard had 32 points, seven rebounds and four assists while Paul George had 30 points, six rebounds and three assists in LA’s 135-116 win on Tuesday night. The big winner in the game was the bench which scored a massive 58 points. On top of that, the Clippers shot 57.4% from the field, 50% from deep and had just 10 turnovers in the win.

This is another one of those games, similar to the Brooklyn game, where the favorite should just be winning and winning well. Los Angeles is currently favored by 7.5 points in the spread and we feel pretty comfortable taking that over the -310 on offer in the money line market.

Last time we saw the Washington Wizards, they were embarrassed by the Clippers and had their five game win streak snapped. Things don’t get any easier as they stay on the road to take on the Denver Nuggets who got themselves back home and back in a groove with a 111-106 win over Portland on Tuesday.

The Nuggets made history in that win, committing just one turnover as a team for the entire game. They were able to make the most of their opportunities because of it and they picked up the win because of it. Nikola Jokic had an incredible 41 points, five rebounds and five assists, but despite his big game, the score was still tied heading into the last. The Nuggets needed a hero and Jamal Murray filled that role, scoring 19 of his 24 points in the last quarter while adding a team high eight assists and two steals for the game.

Denver Nuggets as a team tonight:

Washington weren’t quite so lucky, losing to the Clippers 116-135 in LA. Bradley Beal had a team high 28 points and a season high 10 assists while Russell Westbrook had a near triple double with 20 points, 10 assists and nine rebounds, but allowing any team to score 135 points is never going to end well.

There is a lot of emotion in this one as the Nuggets will feel as if they were robbed when these two teams faced each other last Wednesday as Beal hit a pair of free throws with 0.3 left on the clock to give the Wizards the two point win. Both Murray and Jokic had over 30 points in that one while Davis Bertans shot a blistering 9/11 from deep for 35 points. He has combined for just 20 points in three games since and can’t be relied upon to give that game breaking performances like that regularly.

Denver’s performance against Portland and the fact that they catch the Wizards at home this time has us leaning towards a comfortable Nuggets win in this one.

This will be the second and final matchup between the New Orleans Pelicans and Milwaukee Bucks for the season with the former taking the first 131-126. The obvious yet important difference in that one was that Milwaukee was the road team, something they have struggled with this season, just a 7-9 record, compared to 12-4 at home.

The Bucks come into this with some of the best form possible, picking up three straight wins, all by at least 13 points and most recently by 27 over the Timberwolves. Milwaukee put up a massive 139 points in that win that wasn’t always so close. The Bucks held just a two point lead after the first but used a 41-26 second quarter to blow the game open. Giannis Antetokounmpo had team highs across the board with 37 points, eight rebounds, eight assists, two steals and two blocks.

While not as good as Milwaukee’s, the Pelicans have some good form as well, winning their last two. After a five point come from behind overtime victory against the Celtics, New Orleans beat the Pistons 128-118 last night. Zion Williamson top scored with 32 points, Brandon Ingram had 27 points, eight assists and seven rebounds while Steven Adams returned to the lineup for a big 14 point, 15 rebound, two block night.

Adams is a big inclusion for the interior defense ahead of a big contest with Antetokounmpo but the Pelicans are just 1-3 on the second night of back to backs and the Bucks are thriving in Milwaukee at the moment. The role players are stepping up, hitting shots and providing energy while their MVP and the snubbed Khris Middleton continue to make big plays when needed.