Our FREE NBA picks have six winners for tonight's action so jump on quick before tip off! 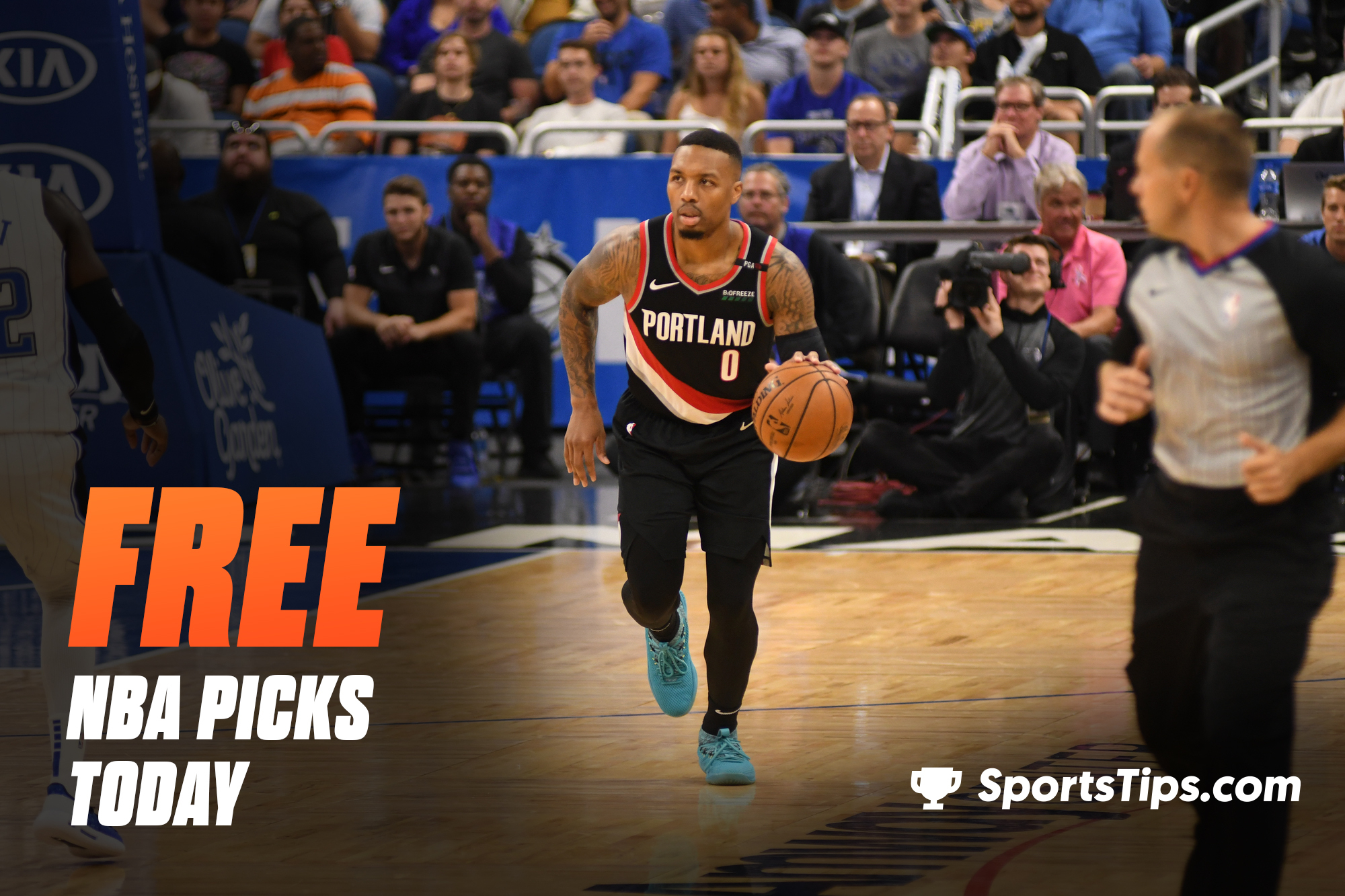 No better way to start than week than the six winners of tonight’s action courtesy of our daily free NBA picks! We have analysed the form to give you our best bets for every contest tonight, including as the Lakers losing their third straight?!?

Find all of our picks and best bets for each of tonight’s six games below!

The Houston Rockets finally get back on the court for the first time since Wednesday and their first home game in 11 days, when they host the Chicago Bulls tonight. Houston will be hoping that their time away from the court will be somewhat of a circuit breaker after losing their last seven games.

On Wednesday in Philadelphia, the Rockets are themselves in a 26 point halftime hole but managed to claw themselves all the way back before falling 113-118. John Wall scored 26 of his 28 points in the second half, leading the incredible comeback but couldn’t quite seal the deal. Victor Oladipo remains doubtful for this game and Houston’s big trade acquisition is likely to miss, his fifth missed game from the Rockets’ last six.

Game has slowed down for the 25-year-old LaVine.

That is a worrying sign for Houston as Oladipo played in the first matchup between these two sides but Zach LaVine carried the Bulls to a five point victory. Oladipo had 32 points and nine assists but LaVine stole the game with 33 points and seven assists of his own.

Chicago will come in with confidence from that win and momentum from Saturday night, where they beat the Kings 122-114. LaVine was once again the star of the show, finishing with 38 points, four rebounds, three assists and three steals while Coby White shot 5/8 from deep for 19 points.

Houston’s seven game losing streak has seen them drop to a miserable 11-17 record, but they are much better at home, 5-6, than on the road. However, they are playing some awful basketball at the moment and Zach LaVine will be able to put Chicago over the top in this one. The Bulls need to keep winning to stay afloat in a stacked middle portion of the Eastern Conference and we like them to do so here.

The Dallas Mavericks play their first game in eight days, after dealing with some disastrous weather, when they host a Memphis Grizzlies side that is coming off a 31 point loss on Saturday night. Memphis looked terrible in their 97-128 loss to the Suns but now get on the road, 7-4 record compared to 6-9 at home, in a chance to turn things around.

The Grizzlies saw a 13 point deficit after one and then a 31 point deficit at the half and weren’t able to keep up, allowing Phoenix to shoot 24/46 from deep while shooting just 5/33 themselves. Gorgui Dieng top scored with 15 points off the bench but the Grizzlies have some excuses, missing multiple starters and rotation players who are expected back for this one.

They will need everybody available against a Dallas side that won four of their last five games before being shut down for a week, however their last game was actually a 118-121 loss to the Blazers. Luka Doncic put up a massive 44 points, nine assists and seven rebounds but the Mavs couldn’t come back from a 12 point deficit heading into the last, after a 30-45 third quarter made things too tough for them.

We are expecting a bit of rust for the Mavs after being out of action, but Memphis’ last game gives us no confidence to back them. It will be a much closer game than last time out for the Grizzlies but they won’t be able to keep up with Dallas and their high scoring offense.

An interesting battle between two sides coming off impressive wins as the Miami Heat end their seven game road trip against the Oklahoma City Thunder tonight. The Heat come in off two straight wins, most recently over the Lakers, while the Thunder are on the quick backup after their 117-101 win over the struggling Cavs last night.

Shai Gilgeous-Alexander played incredibly well, scoring 31 points on 60% shooting along with nine assists and four rebounds, helping the Thunder to a 11 point halftime lead and extending it further down the stretch.

Things will be much tougher against a Heat team that locked down the defending champion Lakers, winning 96-94 in LA. Miami got out to a 36-23 lead after the first and despite seeing their lead dwindle away, they managed to restrict LA to just 17 fourth quarter points to hang on for the win.

Kendrick Nunn top scored with 27 points on 10/14 shooting while Bam Adebayo had 16 points, 10 rebounds, six assists, two steals and a big block on LeBron James down the stretch.

Miami is clearly the much better team here and despite their struggles of late, they should be winning this. There is some worry about their form at the end of such a long road trip but the Thunder are just 4-9 at home, 2-3 on the second night of a back to back and we like the Heat to get their third straight here.

The Portland Trail Blazers are getting on the road to take on the Phoenix Suns in an attempt to bounce back from a disappointing home loss against the Wizards on Saturday night. That may be tough as the Suns are coming in with a heap of momentum after two wins with a combined margin of 49 points.

Most recently the Suns picked up the 128-97 win in Memphis, dominating from start to finish. A 28-15 first quarter was followed up by a 37-19 second quarter, seeing them hold a 31 point halftime lead. Five different players scored at least 16 points, led by Devin Booker’s 23 points, five rebounds and five assists.

The Suns shot a blistering 24/46 from deep and will want to keep that up against Damian Lillard and the Blazers. Portland have won six of their last seven games and Lillard has averaged 32.7 points, 9.6 assists and 4.7 threes over that stretch, but it just wasn’t enough in their 111-118 loss to the Wizards.

Lillard had 35 points, 12 assists and six rebounds while every starter scored at least 11 points but giving up 118 points is far too much. The Blazers made a very handy 19 threes but needed 55 attempts to get there and they lost the assist and rebound battle as well, making things very hard for themselves.

An interesting one as Portland is 10-5 on the road while Phoenix is 10-5 at home this season, however Phoenix, who are in the top eight for both offensive and defensive rating, should be winning this one. They are fully healthy while the Blazers are overperforming as they are still missing multiple starters due to injury. Look for Chris Paul and Mikal Bridges to try and shut Lillard down and the Suns get on top in this one.

The Utah Jazz finally lost another game! After beating the Clippers by 18 points two nights earlier, Utah weren’t able to keep their streak alive as LA saw Kawhi Leonard and Paul George both return and give them the edge. They have the perfect opportunity to bounce back against an inconsistent Charlotte Hornets side that is just 5-7 on the road this season.

Friday night saw Donovan Mitchell put up 35 points, five assists and three steals while Bojan Bogdanovic had an extremely efficient 23 but the Jazz weren’t able to catch up after falling in a eight point hole after the first quarter.

They shot just 35.3% from deep in that one and were forced to live in the mid-range, something they are bottom in the league for so far this season. They should have a much easier go of it tonight as the Hornets allow the third most three point makes in the league and are worse in that statistic when on the road as well.

Charlotte comes into this one with some momentum after some late game heroics by Terry Rozier got them a 102-100 victory over the Warriors on Saturday night. After trailing by two points with 9.3 seconds remaining, Rozier scored four points including the game winner as time expired to get the Hornets the win. Those four gave Rozier 36 for the night and he will be wanting to keep that going against the best team in the league.

While it was a shock to see Utah lose, it is games like those that teams need to rally together and regain their focus. Unfortunately for Charlotte, they have popped up on the schedule at the wrong time and will get the full force of Utah and their incredible play on both ends of the floor.

The Los Angeles Lakers are seriously struggling right now with both Anthony Davis and Dennis Schroder both out of the lineup, losing their last two games, both of which were at home, and three of their last four. Things don’t get any easier against a Washington Wizards side that has four straight wins, all of which were against playoff teams from last season.

Saturday night saw Washington get exceptional performances from their two stars as Bradley Beal put up 37 points on 59.3% shooting along with seven rebounds and two steals while Russell Westbrook had a monster triple double with 27 points on 64.7% shooting plus 13 assists and 11 rebounds.

Washington found themselves trailing by 12 points after the first quarter but a 30-12 second period got them back in the game and then a 29-19 last quarter got them the win. They will need a more consistent approach against LeBron James and the Lakers who will be doing everything in their power to ensure they don’t lose a third straight.

Saturday night saw James shooting just 7/21 on the way to 19 points, nine rebounds and nine assists as Kyle Kuzma led scoring with 23 points, but the Lakers managed just 94 points and it wasn’t enough.

As good as the Lakers are, they are just 9-6 at home this season and their lack of depth is on show with both Davis and Schroder out. Meanwhile the Wizards seem to be gelling at the right time and are playing some very nice basketball of late. Take the Wizards as big road underdogs against the defending champs.