Finals season is upon us, but we still have some very important questions! 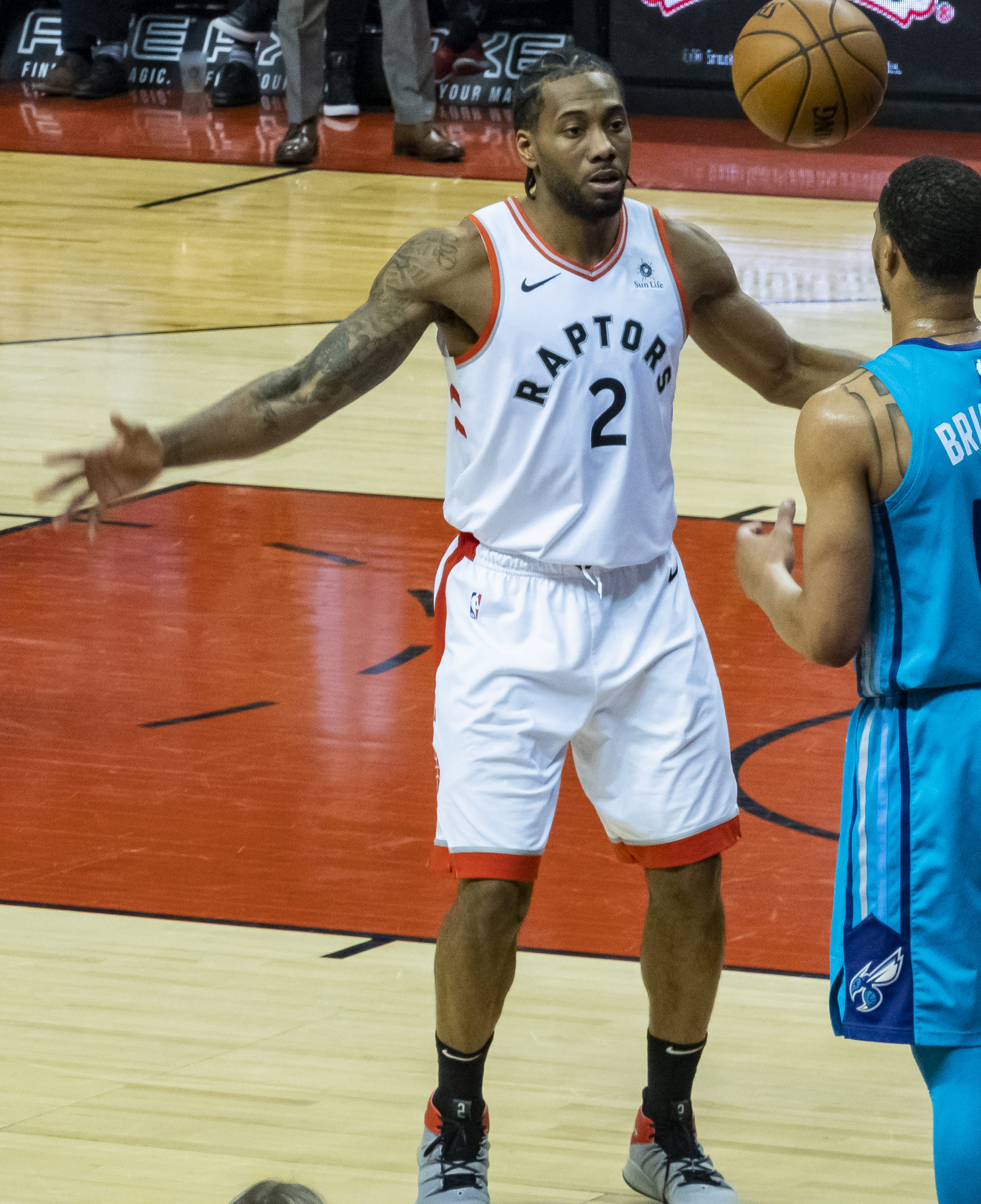 There are some things we know for near certain going in to the 2019 NBA Finals:

But that’s no fun; the truly entertaining stuff is what we don’t know yet. That’s the beauty of basketball. While most pundits think the Warriors are going to win (and win fairly easily), anything can happen out on the hardwood.

This particular finals series feels even more unknown than most. With the looming threat of both Durant and Leonard’s free agency; the injuries to Durant and Cousins; the fluctuating form of everyone on the Toronto roster not named Kawhi and the omnipotent, ubiquitous force of Drake on the Raptors’ sideline, it truly, genuinely feels like this is anyone’s series.

That said, of all the unknowns we feel there are three questions at the heart of all the finals scuttlebutt and speculation:

1. Who gets clamped by the Klaw?

It feels almost blasphemous to type this about a 2 time Defensive Player of the Year and 3 time NBA All-Defense first team member, but, in the midst of a historic offensive post-season, Kawhi Leonard’s defense has bizarrely flown under the radar.

When healthy and locked-in (as he assuredly has been for the last month and a half), there is no better defender in the game of basketball. Leonard as a one-on-one matchup is a weapon the likes of which we’ve rarely seen before in the NBA, and if the conference finals are anything to go by, Toronto’s head coach Nick Nurse appears to have figured out exactly how to use him.

Leonard began the series against Milwaukee matched up on Khris Middleton and in Toronto’s opening two losses the two were opposed for 79 of Milwaukee’s offensive possessions. Middleton scored just 13 points, but Giannis Antentokounmpo was running rampant (to the tune of 55 total points) and the Bucks, at 2-0 up, appeared destined to run away with the series.

Nurse (in a moment of what we can only assume was abject desperation) made the decision after Game 2 to play his only trump card, and the Klaw moved on to the Greek Freak. In the remaining 4 games of the series Giannis scored just 25 points in 141 possessions when matched up on Kawhi, and, arguably that one singular adjustment resulted in Toronto reaching its first NBA Finals in franchise history.

So, which Warrior will Kawhi be unleashed on?

In the one game Kawhi played against Golden State this season he was matched up on Kevin Durant for 46 possessions, Andre Iguodala for 16 and Klay Thompson for 15.

That set-up is unlikely to be repeated in the Finals for a number of reasons; not least of all the fact that Durant will miss at least the opening game of the series. It’s also fair to say the match-up didn’t work all that well for Toronto when they tried it in the regular season. The Slim Reaper dropped 51 in Golden State’s overtime loss, and 21 alone in the 46 possessions matched up on Kawhi.

The logical next option is Thompson. The Bay Bomber scored just 4 points in his 15 possessions against Kawhi, but is he really the best use of Leonard’s talents? Kawhi is a brilliant outside defender (he’s excellent in all aspects), but, as he showed against Giannis, his real strength is on the interior. Just 21% of Thompson’s shots in these playoffs have come within the paint, which means he isn’t exactly a match made in heaven for the Klaw.

Will Nurse try Kawhi on Steph Curry? Curry’s usage rate was 32.1% in the conference finals – the highest mark of any player last round. Without Durant he’s clearly the biggest threat to the Raptors, but the sheer number of times he touches the ball in a game and his perpetual motion is a concern for a guy like Kawhi, whose endurance is probably not his strength. In the one game these two teams played this year without Kawhi, Toronto went with a two-guard lineup; Fred VanVleet and Kyle Lowry both started in the backcourt. Make of this what you will (and of course it’s different now without Durant on the floor), but Steph scored just 4 points in 39 possessions on VanVleet.

With Danny Green, Pascal Siakam and Kyle Lowry all excellent perimeter defenders, probably the next link down the chain is for Kawhi to take Draymond Green on the inside. That would enable him to help towards the middle on all drives if Green is out on the perimeter, whilst also allowing the Raptors to switch on those potent Curry / Green screen and rolls.

The potential of Leonard on Green is mouthwatering. We can’t wait.

2. How do the Warriors manage their injury conundrum?

It’s complete madness that going in to game one of the NBA Finals both a regular season MVP & two-time Finals MVP in Kevin Durant and a 4 time All-Star, 2-time All-NBA second team behemoth in Demarcus Cousins feel superfluous to Golden State’s needs, but that’s just where we’re at with this Warriors team.

The Durant situation is the most intriguing. He’s listed as out for Game 1, but there are persistent rumours suggesting he may not be able to play at any point during the series.

Should the Warriors even be concerned by that possibility? Arguably no, given they’ve won 5 straight games in dominating fashion since Durant left the floor in Game 5 of the conference semi-finals.

The question of whether Golden State are better off without Durant has been done to death in columns and talk shows everywhere, so we won’t bother rehashing it. Suffice to say they may not be a better team, but they’re certainly better to watch and seemingly enjoy each other’s company more without him.

If he does get healthy early on in the series, how will Steve Kerr handle it? Will he play with a minutes restriction? What happens if he gets healthy just in time for the Warriors to be up 3-0 up going in to a potentially championship-clinching home game at Oracle?

These are all questions we simply can’t answer without knowing the true extent of Durant’s injury. Safe to say the Warriors won’t be handing out that information freely any time soon (if ever).

By contrast, the comparative definitiveness is what makes the Cousins situation so intriguing. He’s officially been listed as questionable for Game 1 and scrimmaged with the reserve unit on Monday which is a fair indication that he’s just about ready to return to the floor.

The 6 foot 11 centre played in just 30 games for the Warriors this regular season and recorded a net rating of +4.6 – not bad, but not great considering the Warriors’ overall net rating was +6.4. Surprisingly given some of the commentary this year, Golden State were actually a better defensive team with Cousins on the floor than they were without him.

Probably the most stunning statistic around Cousins, though, is that in the 2 playoff games he played, Golden State had an offensive rating of just 75.4 with him on the floor. That is an enormous concern, and granted, the sample size is small, but can Steve Kerr really trust a guy to start in a Finals who has played in 1.5 TOTAL playoff games in his entire career?

What Kerr and the Warriors do with Cousins may just be the most intriguing part of this whole Finals campaign.

3. Which Raptors back-court is showing up; the good, the bad or the utterly horrendous?

While after 5 years of sustained excellence from messrs Thompson and Curry we all know more or less what to expect from then on any given evening, the performance of Toronto’s guards this offseason has been so bipolar we hear M. Night Shymalan is looking to cast them in his latest thriller flick.

It’s genuinely hard to conceive of a sporting turnaround which has unfolded as rapidly and starkly as that of Fred VanVleet in the last month.

The 25-year-old Wichita State product had a diabolical start to this post-season; his plus-minus against the 76ers, by way of example, was minus 14. He scored a grand total of 50 points in the opening twelve games of the playoffs, and made just 6 three pointers in total after averaging 11 points and nearly 2 threes per game in the regular season.

To say his change in from in the last two weeks has been pronounced is to undersell it entirely. VanVleet’s plus-minus in the conference finals skyrocketed to a barely believable +39; his effective shooting percentage was an outrageous 64.4%; he scored more points in 6 games than he had in the previous 12; he hit 16 threes; and, most importantly, the Raptors outscored Milwaukee by 12.3 points per 100 possessions with VanVleet on the floor.

The list could go on – seriously there are that many stats. So, are we getting First-Round-VanVleet or Conference-Final-VanVleet against Warriors? Who the hell knows.

Unlike VanVleet, Danny Green’s performances this playoffs have been consistent. Consistently horrendous.

In 18 games this postseason he’s averaging 6.8 points in 28.9 minutes, shooting the ball at 32% from the floor and doing absolutely nothing else of statistical value for the Raptors. His effective field goal percentage for the playoffs is currently at 44.3%; putting him 42nd of 49 players this year who have taken at least 100 shots.

In the conference finals his terrible postseason reached its nadir, with a net-rating of -7.7 in a 6 game series win. By way of contrast, the next worst net-rating out of the other 6 Raptors playing regular minutes was Marc Gasol at -1.5, and overall Toronto’s was +1.0.

Yikes. I guess the grass isn’t always Greener on the other side.

Meanwhile, Kyle Lowry seems to have shaken his reputation for big-game failings – for the moment.

The guy renowned for being diminutive ball of energy is making it happen for himself by doing exactly that – being a diminutive ball of energy. According to some of the more advanced NBA stats, he’s second currently in the playoffs for loose balls recovered per game (2.2) and charges drawn (0.72). Most impressively, though, he’s got an effective field goal percentage of 63.1% in final quarters so far, which is a pretty huge indicator of how clutch he’s been to close games.

The Raptors are also +148 in total points when Lowry and Leonard are both on the floor, and whilst a large part of that has been the transcendent play of Leonard, his back-court sidekick deserves an enormous amount of credit. Probably the biggest indicator of his value to this team is that offensively Toronto are 21.6 points per 100 possessions better off with Lowry on the floor than they are with him off.

Kawhi Leonard may as well be a metronome; he’s going to put up 30 points and 8 rebounds every game in this Finals without the slightest hint of exertion. The real key for the Raptors will be the offensive performance of their three guards.

If all three can fire at the same time, this just might be a competitive series.