As the 2018/19 NBA season rises towards its (seemingly) inevitable Warriors-Bucks crescendo in June, the defeated challengers will begin looking wistfully to the summer, casting their eyes towards the mythical land of “free agency”.

But what really is this magical world? What happens when Kevin Durant, Kyrie Irving, Kawhi Leonard, Kemba Walker, Klay Thompson and Jimmy Butler become freely purchasable commodities on the open market in July 2019? Has “loyalty” become a foreign concept? Why would any basketballer in their right mind want to go to the New York Knicks?

Let’s find out, as we take a trip down the free agency rabbit-hole in this weekly series of articles.

Last week we had a look at the best available upcoming NBA free agents.

While it’s great to know which players are coming out of contract, it’s also important to be able to work out which teams are going to have the money to be able to sign them.

Before we dive in to this on a team-by-team basis, it’s a handy skill to be able to look at a team’s salary cap situation and assess how much space they’re likely to have.

How do I work out exactly how much cap space a team will have for the 2019-20 season?

There’s no easy way to do this. Unfortunately, it’s not as easy as looking at a team’s projected salaries for 2019-20 and working out how close that total is to the league salary cap.

There are certain variables that can mean a team looks like they have less space than they actually will by the time the free-agency rolls around. The most pronounced of these variable additions is the “cap hold”.

Again, (like with many of NBA rules) the different types of cap hold (free agent, rookie, incomplete roster etc.) are worthy of their own Explainer article. In simplest terms, a cap hold adds money to a team’s projected cap for players who haven’t been signed to a contract yet, but are expected to be signed because of a certain advantage the team holds.

For example, as we’ve discussed previously, the NBA has some salary cap exceptions (e.g. the Bird Exception) which give a prospective free-agent’s current team certain limited advantages when it comes to re-signing that player.

A cap hold assumes that the team will exercise their salary-cap exception to re-sign the player. That player’s salary is thus included in the team’s projected cap at a certain percentage (which varies depending on the type of cap hold) of the player’s prior salary.

The only way for a team to remove a cap hold from their projected salaries is to “renounce” their rights to the player – this is why you’ll hear phrases like “Team A has renounced their Bird rights to Player B”.

It sounds complicated but it’s actually fairly simple. There are four steps to working out a team’s actual cap space, and then four further steps to work out what the team’s cap space could possibly be.

We’ll use the example of the New York Knicks to walk through this step by step.

1. Add up the salaries in all of the team’s active contracts for the 2019 season.

This is the ‘active cap’. For example, the New York Knicks currently have $29,658,224 locked up in active cap going in to next year, with 8 players under contract for next season:

As discussed above, this is a complex area, and we won’t be spending too much time on it. It is enough to know that the Knicks have $55,444,252 in cap holds. This includes an assumption that they’ll be re-signing DeAndre Jordan to a $27.476 million contract over the offseason, and spending $12.883 million to keep Emmanuel Mudiay. For obvious reasons, this is unlikely to actually happen.

The Knicks still have $6,431,667 of Joakim Noah’s horrendous contract on their books in 2019-20. That counts towards their overall cap.

The projected salary cap for the NBA in 2019 will be set at $109 million. If we subtract the total cap allocation from that salary cap, we can find how much “actual cap space” the Knicks will have.

The Knicks therefore have $17,465,857 in actual cap space – this is money they can spend without needing to make any roster changes.

This figure is based on several assumptions (i.e. the cap holds), which as we’ve indicated, can be unlikely to occur in real life. The purpose of the next steps is to hypothetically reverse those assumptions and find out how much room a team will actually have to work.

As we discussed above, the cap holds assume the team is going to make certain signings based on un-contracted players who they hold rights over. We can now reverse those assumptions by renouncing the team’s rights to all the players who are subject to the cap holds. 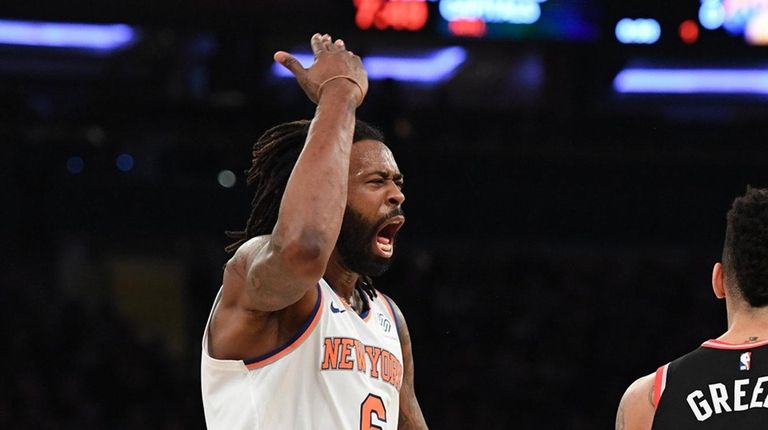 In effect we are now subtracting cap holds from total cap allocation. That is (particularly in the Knicks’ case) a fair projection to make given it’s highly unlikely they’ll be re-signing a guy like DeAndre Jordan to a $27.476 million contract, or Mario Hezonja to a $7.8 million contract (which is what the cap hold assumes).

6. “Waive and renounce” any players with non-guaranteed deals for the next season and decline all team options.

Non-guaranteed contracts are contracts which the team can terminate with no monetary consequences. The Knicks have two such contracts:

They also have a contract with a team option, which the team can decline in order to free up space:

The Knicks also have one contract which is partially guaranteed:

Were they to waive Lance Thomas, the Knicks would be on the hook for just $1,000,000 of his contract.

This is the total minimum amount that the Knicks could have on their books next year based on the current contracts they have.

7. Add in enough minimum contracts so that the team has the minimum number of roster spots filled.

Making all of these moves would leave just four players on the Knicks’ roster. We have to assume they will have the minimum number (12) of players required.

The minimum NBA salary for a player with one-year experience in 2019-20 is $1,443,842. We thus need to multiply this number by 8 and add it to the Knicks’ guaranteed contracts to find the minimum number they could possibly be spending next year. You could be more precise with this by looking at how many draft picks the Knicks have and adding in rookie minimum contracts, but for our purposes this is close enough.

The Knicks thus have the potential to free up almost $75 million in cap space; more than enough to get Kevin Durant and Kyrie Irving.

About as clear as mud, right?

Next week, we’re going to use our knowledge to work out who the NBA teams with the most cap space are, and which players they might want to spend their money on.

Special thanks to spotrac.com for all salary information.