No. 1 Alabama Crimson Tide and No. 3 Ohio State Buckeyes will face off in the 2021 College Football National Championship game on Monday night in Miami. 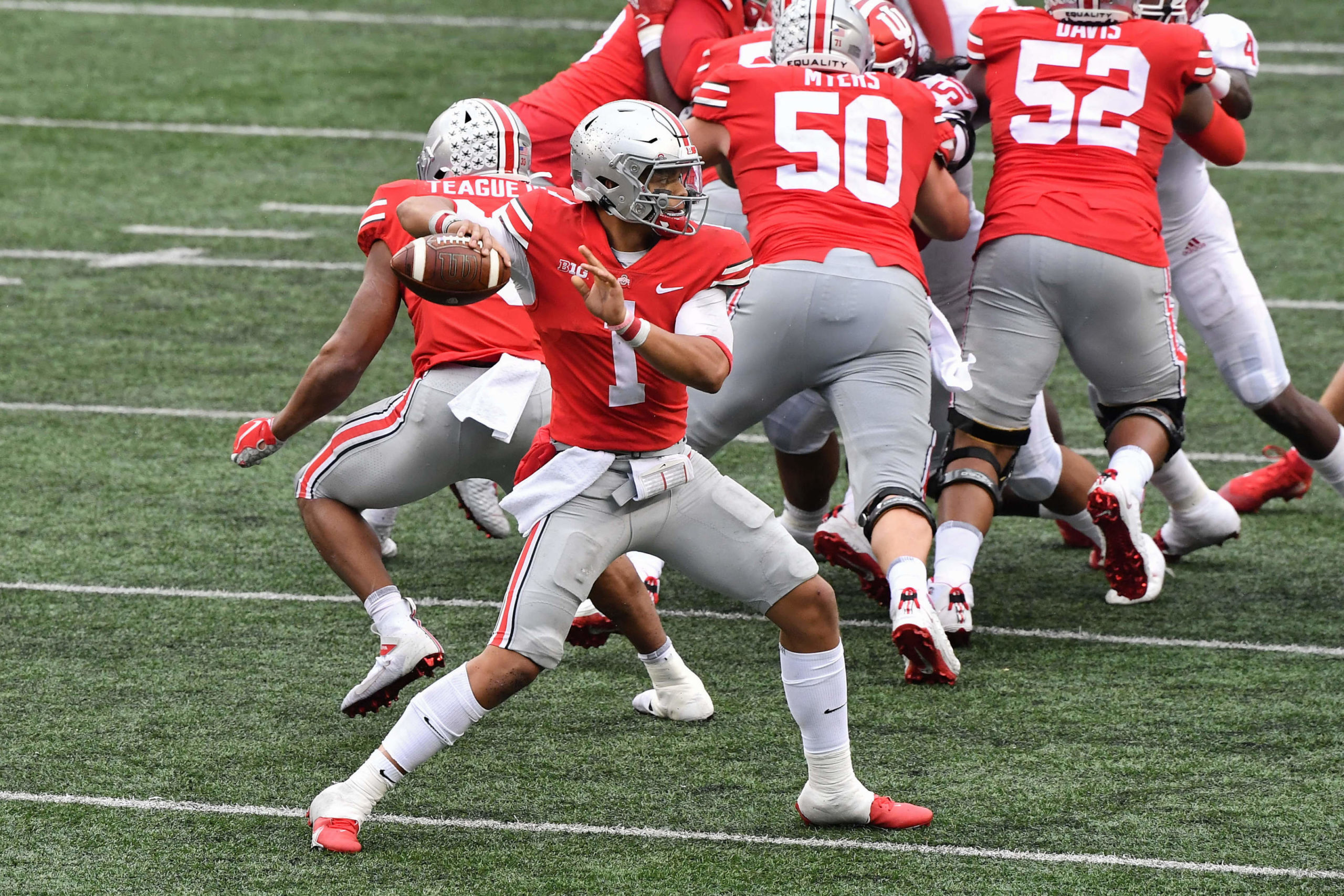 Less than 24 hours away from kicking-off the final game of the 2020/21 college football season, there is no better time than now to preview the 2021 CFP National Championship game between No. 1 Alabama Crimson Tide and No. 3 Ohio State Buckeyes.

After an 11-0 run that once again finished with an SEC championship, Alabama were rewarded with the No. 1 ranking in the country for the college football playoffs. Following an impressive 31-14 victory over No. 4 Notre Dame in the Rose Bowl, Alabama will enter Monday’s National Championship game as the -320 favourite to win their sixth National Championship since 2009 and their first since 2017.

The Crimson Tide’s offense is littered with talent at every position. Quarterback Mac Jones and wide receiver Devonta Smith were two of the four finalists for the 2020/21 Heisman Trophy, with Smith becoming the first receiver to win the award since 1991.

In Alabama’s 11-0 run to win the SEC, Smith led the country in catches (98) and receiving yards (1,511) while also finishing second in touchdowns with 17. Smith was also the standout in Alabama’s Rose Bowl victory over Notre Dame adding 130 yards and three touchdowns to his historic season.

Jones finished the season with 3,739 passing yards, 32 touchdowns and only four interceptions with a nation high 76.5 completion percentage. Despite not being named as a Heisman finalist, the Crimson Tide’s most dangerous offensive weapon is arguably running back Najee Harris.

Harris became Alabama’s all-time leading rusher this season and is no stranger to the big stage having racked up 178 rushing yards, 67 receiving yards and five total touchdowns in Alabama’s SEC championship game victory over Florida.

However, as much talent as Alabama’s offense has to offer, the Crimson Tide’s defense is equally as formidable, holding eight of their 12 opponents to fewer than 20 points this season. Including most recently restricting No. 4 Notre Dame to just 14 points in the Rose Bowl earlier this month.

Mac Jones is the +350 favourite to be named MVP of the National Championship game with Smith (+500) and Harris (+600) currently possessing the third and fourth most favoured odds.

Unlike Alabama, Ohio State’s journey into the National Championship game has been much more contentious.

When positions and rankings for the 2021 College Football Playoffs were being deliberated, many experts and some opposition coaches believed that a five game regular season was too small of a sample size to name the Buckeyes one of the four best teams in the country. Still, Ohio State earned the No. 3 ranking and were given the opportunity to face No. 2 Clemson in the Sugar Bowl.

Ryan Day says he did not realize until today that Nick Saban’s coaches poll ballot placed Ohio State at No. 5 behind Texas A&M at No. 4.

You might’ve heard that Dabo Swinney put Ohio State at 11.

Despite entering the game as seven-point underdogs, the Buckeyes were able to pull off a 49-28 upset victory thanks to a 385 yards, six touchdown performance from Ohio State quarterback Justin Fields. Having silenced their doubters and earned a spot in the National Championship game, the Buckeyes will enter as the +245 underdog to take out the 2020/21 National Championship.

Fields heavily targeted wide receiver Chris Olave in the Sugar Bowl last week, finding the junior on six occasions for 132 yards and two touchdowns. Olave and running back Trey Sermon will be key to the Buckeyes success on Monday, with Sermon accumulating 254 scrimmage yards and a touchdown in Ohio State’s Sugar Bowl victory.

Ohio State’s defense has been up-and-down this season, but did manage to force two crucial turnovers in their win over Clemson despite allowing 444 total yards. The Buckeyes will once again need to make big plays when coming up against the likes of Mac Jones, Devonta Smith and Najee Harris on Monday as Alabama’s All-American trio will likely punish any opposition who allows them big yardage.

Justin Fields is the only Buckeye in the top four favourites to be named MVP of the National Championship game, currently boasting odds of +500. Sermon is the next most favoured from Ohio State player, currently with odds of +1000.

In what is shaping up to be an offensive onslaught, Alabama and Ohio State both possess elite quarterbacks, standout offensive lines, a plethora of offensive weapons and defenses that have given up big totals in recent outings. Expect a high-scoring and entertaining game to cap the 2020-21 college football season.